So we were leaving spain behind, we got up at 8am and was on the 9am train back to Barcelona airport. It was a good job we got there quite early because the Ryanair bag drop took us an hour to clear. We were entertained by an old Spanish couple next to us having a huge argument. We didn’t know what they were arguing about but we had fun trying to guess. It meant once we got through security we just had time to go to the toilet and grab a sandwich from the vending machine before we boarded.

The flight time between Barcelona and Milan was only 1 hour 20 minutes and it flew by. We landed and caught a bus to Milan central station which took about 40 minutes and cost 5 euros each. We had preordered a Milano card which we also collected from the airport however in hindsight we certainly didn’t use this enough to justify it. It did include a 48 hour metro ticket though and that was handy when we arrived.

We were staying at the Hotel Palladio and once we got to the metro it was only a 5 minute walk from the stop. It was about 32 degrees though and with all the luggage that seemed long at the time. Our hotel was really nice though, the welcome was incredibly friendly, the room was a really good size including a lovely big bed. We had a balcony and a nice bathroom too so we were really happy. We took an opportunity to unpack and freshen up before heading back out.

We had noticed a supermarket near the metro station so we went back and picked up some tomato bread, cheese, ham, crisps, cookies and drinks and made our way to Parco Sempione, the main park in Milan. So my vision was a relaxing afternoon having a picnic in the park, just as my friend Vicky and I had done a few Augusts ago on our visit to Milan. Well it soon turned into what Adam described as ‘Blitzkrieg’ due to the sheer amount of mosquitos that descended on us. Adam was having fits trying to avoid them whilst I sat there laughing my head off. In the end we packed up the bits and decided to eat and walk.

We walked around the park taking pictures of the various monuments. They also have a 15th century castle in the grounds so there are plenty of photo opportunities. There was a pond that had koi carp, ducks and turtles too and everyone was hand feeding the turtles.

There was also a free little museum in the park dedicated to the Land of Cockaigne, which was a story amongst the poor classes where rivers flowed with wine, houses were made of cheese, there was sexual liberation and no hierarchy. The museum contained some pretty cool 15th century drawings. 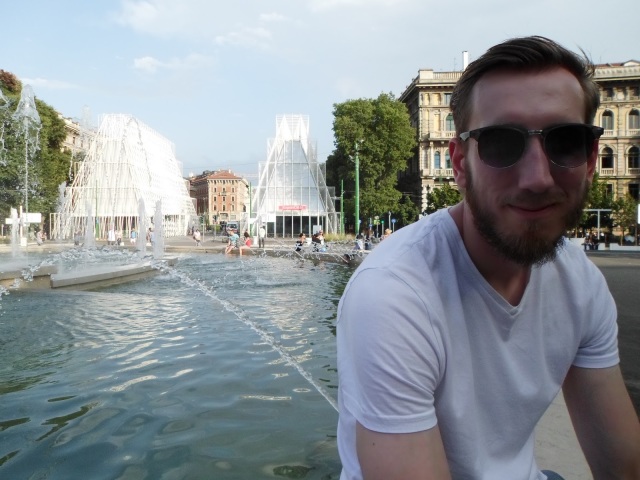 We spent half an hour sitting on the big fountain outside the castle, me dangling my feet in, cooling down. We were watching some salsa dancing that was going on over the road, Adam didn’t want to join in haha. We ended up grabbing some more bits from the supermarket and going back to our hotel for the evening as we had seen some billboards around town with things in we thought we might be interested in and wanted to do some research. Upon inspection I also discovered I had got 3 bites from my time at the park whilst Adam left unbitten. Typical!