Our hotel offered breakfast but this morning was an early start, we were up at 7am, but we still managed to grab a pastry as we passed the breakfast bar on our way out.

We were heading out on a tour today, of the Amalfi Coast. We booked it through Viator but the travel company was called AVI travel. The meeting place was in the central square of Sorrento. Apparently the best way to get there from our hotel was a bus but I hate getting buses in places I’m not familiar with so we thought we would try the train instead.

Our local station was Sant’Agnello and the train travel time to the central Sorrento station was only one minute! The train station was only a 2 minute walk from our hotel so we grabbed a few extra breakfast items at the station whilst we waited.

The tour pick up point was easy to find and we arrived on time to meet the coach. We boarded and made our way to our first point, Positano. The bus stopped for 20 minutes whilst we got some pictures from its position overlooking the bay and pictures of the quaint town itself.

We then had another half hour stop further along the Amalfi road at a large ceramics place where we could use the toilet, grab a drink and take in the fantastic views overlooking the coast. The weather today was a lovely 28 degrees, pretty perfect!

We then headed onto the town of Amalfi where this time we had a longer stay of 2.5 hours. It allowed us to have some time to look around this lovely town. I picked up a few gifts from its cute little shops and we also went for pizza at a restaurant called Da Maria Trattoria Pizzeria. I was a bit sceptical of the place as it was recommended by our tour guide however it was the best pizza we had the whole holiday! The wine was also lovely and cheap! 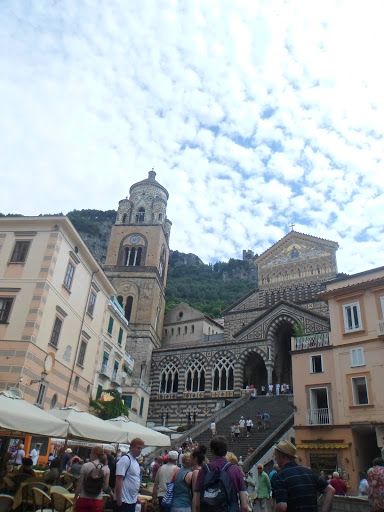 After leaving Amalfi we had a short stop at the town of Atrani and then continued on to the town of Ravello where we had an hour of free time. It was a bit overcast whilst we were in Ravello but there were wonderful views of the mountains and lots of cute shops to browse. I’m determined to return to buy myself a cameo ring. 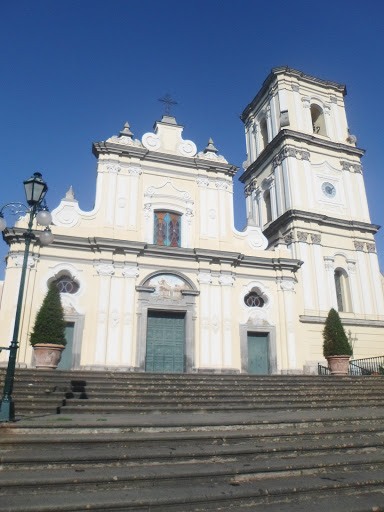 We then made our way back to Sorrento which took about an hour. On the bus the tour guide handed our little peppers to each of us, they represent good luck. We had picked up some glass ones in Naples when we were there.

As we were driving back we recognised the road and realised it was the same one as our hotel so the coach was kind enough to drop us off right outside! We decided we would have dinner at the hotel as a few early get ups had made us tired. I had Caprese Salad and Adam had arancini and everything was delicious! We washed it down with lots of crazily cheap wine and beer. A lovely day!