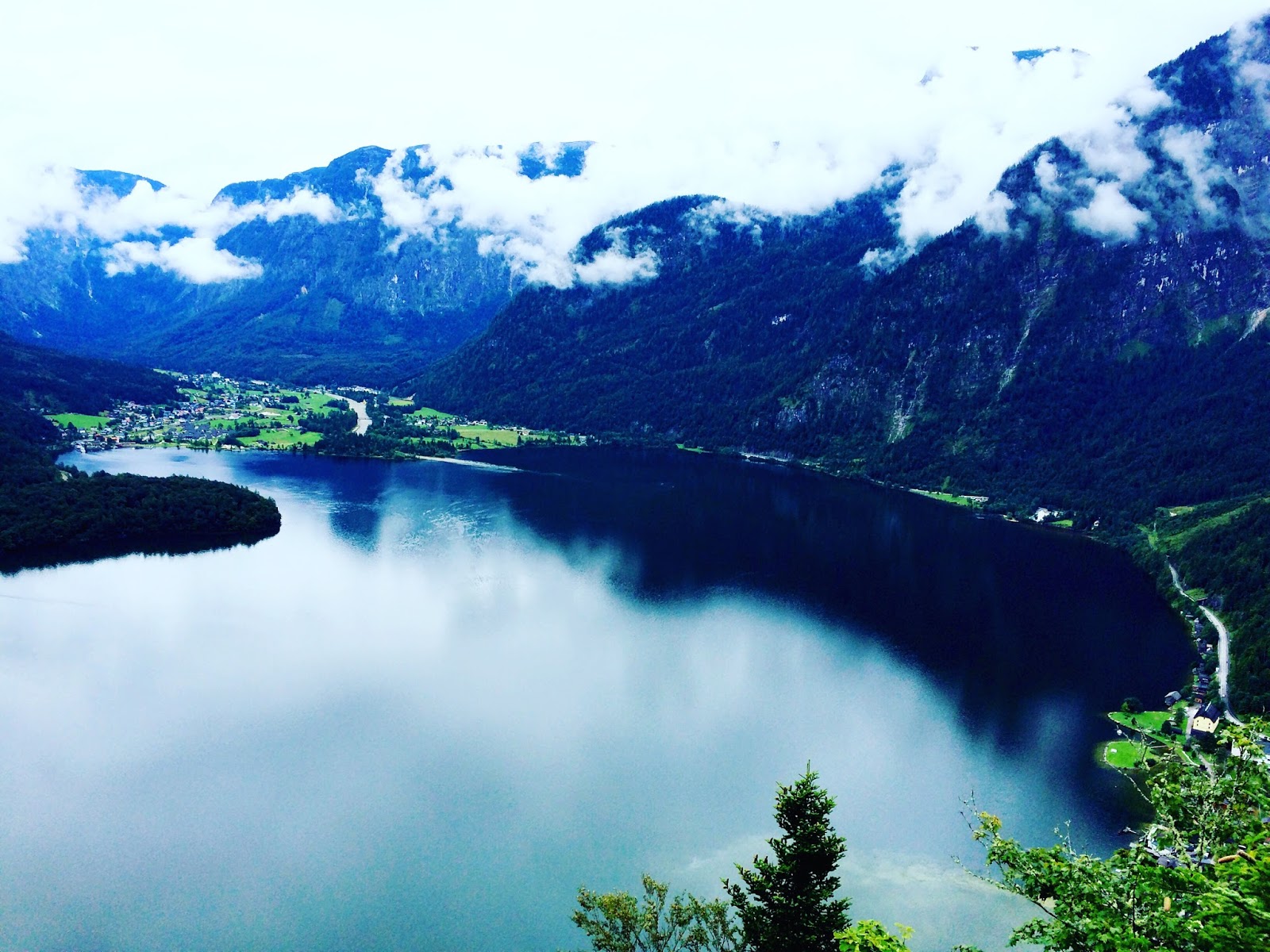 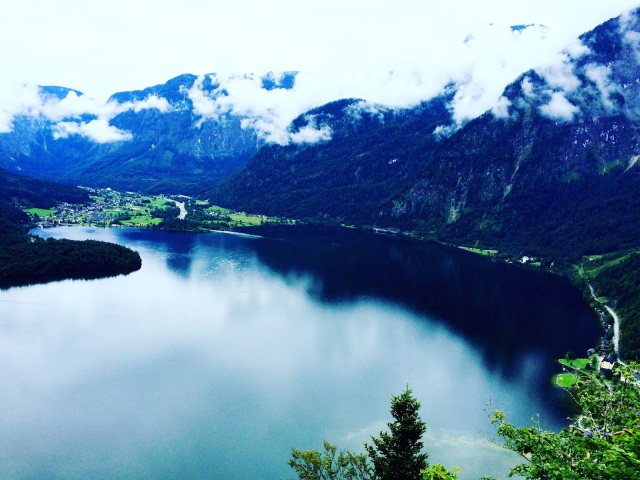 We awoke and had breakfast in our hotel, overlooking the lake. It was a pretty sight first thing in the morning!

We had a fantastic day exploring the old salt mines of Hallstatt. The history of mining salt in Hallstatt dates right back to 5000BC and the world’s oldest salt mines were absolutely fascinating to walk around. 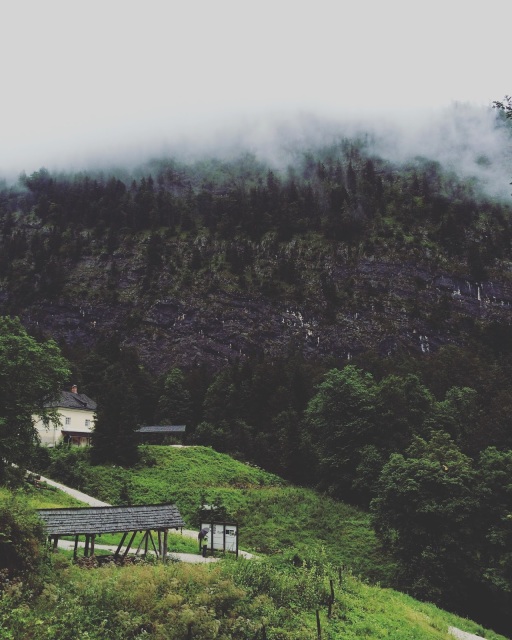 We bought the ticket for the salt mines, for 30 euros we got the cable car up and down the mountain and also a guided tour around the mines. You can’t visit the mines without the tour.

Before you enter the mines you are asked to put on an outfit consisting of some trousers and a jacket. I kept my coat on underneath because it’s quite chilly down in the mines but it did mean I was a bit uncomfortable with too much fabric stuffed under my jacket. 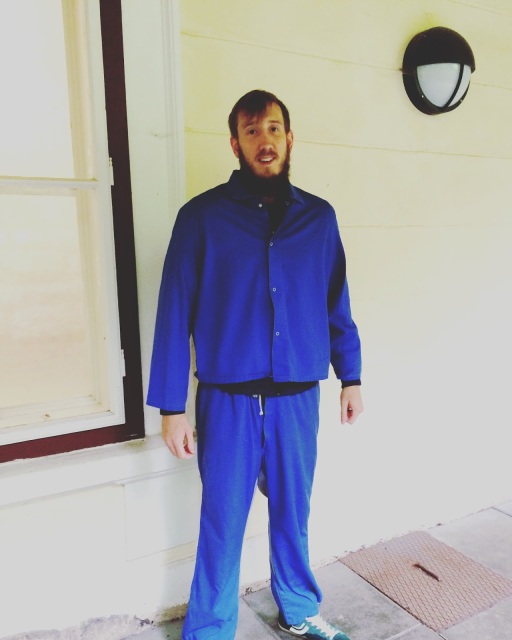 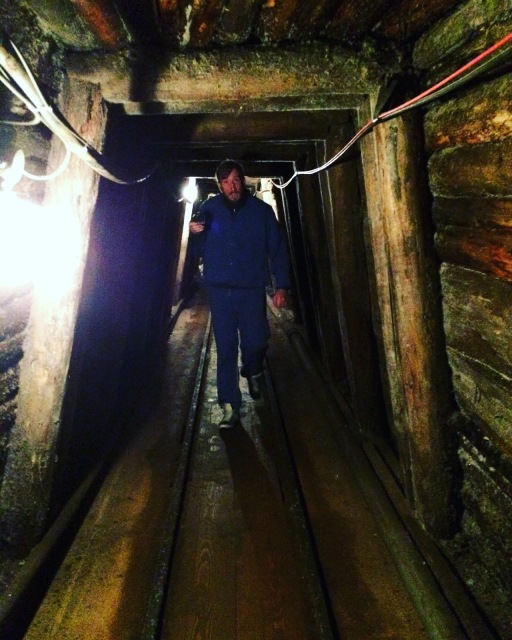 During the visit we saw the oldest wooden staircase (estimated to be from 1344BC) and watched a light show across a beautiful salt lake. We got to speed down a couple of miners slide, which was so fun! We exited the cave by a rather thrilling little train ride that took you down the most narrow of passages. I’m claustrophobic but the seemingly fast speed of the train meant I didn’t feel it at all. 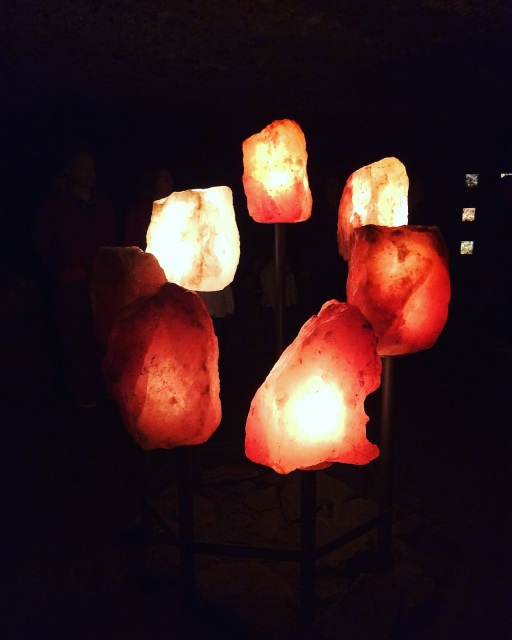 The tour was good but if I had one negative it was that it was a little harder if you were English. The tour guide spoke excellent English so that was fine but throughout the tour there were little programs shown on screens, giving some extra information. They were in German with English subtitles. The tour guide made sure that children were bought to the front but I’m 5’3 and I was left at the back, leaving me unable to read the subtitles and with pretty much no idea what was going on.

We arrived about 11am and by the time we had got up the mountain on the funicular, walked further up the valley and reached the mine it was just gone 12. We only had to wait about 15 minutes before the next tour however when we left we noticed a huge queue for the salt mines, this was about 2pm so I would recommend getting there earlier.

Also on top of the same mountain is the wonderful skywalk, at 360m up it gives you a beautiful view over the lake and the mountains. If you don’t wish to visit the salt mines you are still able to come up the mountain just to see the skywalk, either by hiking or purchasing a funicular ticket.

After we headed back down we wanted something to eat and there was a small cafe called Die Gemischtwarenhandlung am see, which was inside a little shop. I wasn’t really feeling anything on the menu and jsut ordered a bacon baguette but when it arrived it was served in a pizza style and was actually really delicious. The staff were very accommodating, there were a family that arrived when we were there with some awkward demands, and the staff did everything they could to help them.

We had a walk around the shops, they have a lot of salt shops as you can imagine, although some things are pricy. Adam did pick me up a salt lamp, like we’d seen in the mines. It’s so gorgeous, although I had to do a bit of sorting out with the cases to accommodate the several Kg worth of extra weight!

At around 5pm we caught the ferry back across the lake and caught a train to Schaldming, our next destination. The journey was about 2 hours, with a change at Stainach Irdning, and an easy journey.

We checked into our hotel, the Landhaus Tritscher. It was in a great location, just 2 minutes walk from the station and 5 minutes into the main town. We were warmly welcomed upon check in. It was very homely, we even removed our shoes at the door. The room was really big, albeit a bit dated, and had a kitchen and dining area. We had paid 75 euros per night.

We decided to set out as Adam was hungry. Walking into town we happened upon a really cute model village in someone’s garden. The town was bigger than I expected and had a lot of options for places to eat. As I wasn’t eating and we were tired Adam just grabbed a pide, which is a Turkish bread, from Stern kebabs.

It was lovely walking back and seeing all the little houses in the mountains in the distance lit up. I could tell it was going to be an amazing few days!