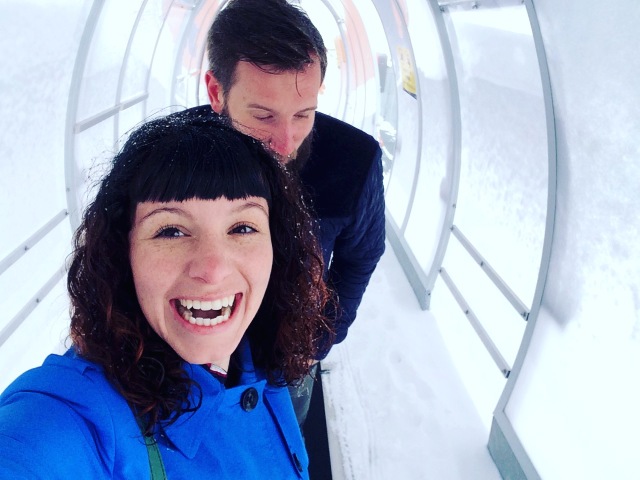 We awoke this morning and once again ventured across the road to the Billa supermarket to grab some breakfast. From there we walked onto the train station where we could catch the 960 bus which went up the Planai.

We sat on until the last stop. Whereas I’d been fine yesterday todays journey had left me feeling travelsick, I think from an attempt to try and read at the beginning. Our destination was the Dachstein mountain, which you can reach by Gondola.

There is a reservation required for the gondolas, which you can make at the gondola station, but we saved a bit of time and made them online. The gondolas were free with our sommercard. Whilst on the gondola journey it became very clear we were underprepared. Every single other person was dressed in proper climbing gear whereas Adam and I were in light clothes and casual footwear.

When it reached the 8900FT ascent we realised just how unprepared we were. There was a thick snow on the ground, in fact it was still snowing! There were snowmen happily chilling beside us as Adam questioned exactly what I had expected to find haha.

To be honest the clothing wasn’t such an issue, the main problem was our footwear. I wanted to go to the Ice Palace and the Skywalk but the entrances were only reachable if you descended a small slope. Even those with climbing shoes were slipping over. It took Adam and I a seemingly long time to get to the bottom, taking tiny steps and digging our feet into the snow.

Our first disappointment was that we couldn’t enter the ice palace as resistant shoes were a must, it was a real shame as I had been looking forward to it.

The second disappointment was the skywalk. Having researched beforehand this is what I expected…

and this is what we got…

So basically the low clouds rendered our vision useless. It wasn’t all bad though, I did laugh my head off the whole time, especially when Adam freaked out on the travelator I had found to take us back up the slope. We got the gondola back down, we’d only lasted about half an hour up the mountain haha.

After having to wait half an hour for the next bus to arrive once we got back to the hotel we were pretty cold so decided to have some warm showers and then chill at our hotel for a while, watching some stuff on the ipad.

That evening we walked into town and went for dinner at Maria’s Mexican. The food was really good, the portions were huge! We ordered a starter and main and I certainly needed to take a nap afterwards! I had a potato dish, that whilst totally not Mexican, was so yummy! It got a thumbs up from us.