So I finally gave in to the super cheap flights and booked a trip to Copenhagen. Adam was quite hesitant about the holiday, we were saving for a new car and he felt that should be our priority. Denmark is hardly known for being a budget destination so I had to prove that I could do the trip for mere pennies (ok well that’s a lie but it was still pretty damn cheap).
We found it really easy to get from the airport to the central station, by train. If you plan on travelling by public transport a lot then there is a tourist pass which you can buy that works out pretty cost effective but we were planning on walking everywhere so we just bought a single ticket which worked out about £3.50 each.

Our accommodation was right outside the station, the Urban House Hostel. I really loved staying here. It was huge and had a restaurant, bar, bike rental and even a tattoo parlour! We paid about £65 a night for a private room with en suite. They had an interesting check in routine where you paid and sorted everything out via email before you went and then you were text and emailed a code to allow you into your room on the check in day. It also meant not having to worry about losing the key! They had good wifi, lockers to store your luggage and was just a really funky place to stay, I’d certainly recommend.

After dropping off our luggage we walked over to Sroget, a pedestrianised shopping street which is one of the longest in Europe! It was a nice stroll and we discovered that Copenhagen has some of the best public toilets we’ve ever seen in our life (and free!). Our favourite shops were the Tiger shop (huge!) and the Lego shop which had some amazing set ups.

We were pretty excited to see a number of 7-11’s, it reminded us of our Japanese travels, and we headed in for a look around. It was easy to see that Copenhagen was a very health conscious place from the kind of food available, but we were also able to pig out on some very affordable fresh bakery bits.

Now full we walked over to the Round Tower (or Rundetaarn), the oldest functioning observatory in Europe. It had a very interesting ‘staircase’ as it was designed for horses to be able to get to the top and therefore is a spiral ramp, fun to run down! Of course the tower offered some stunning views over the city. There were some rooms in the tower which had small exhibitions in too. The entry was 25DKK (Approx £2.80). 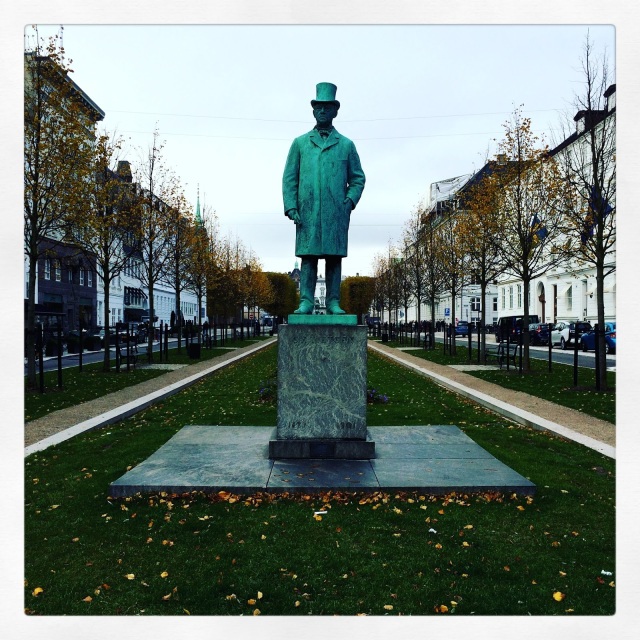 Walking around bought us to some pretty cool places, such as the City Hall square, which has some interesting buildings and fountains in. We also happened upon the Amalienborg Palace Courtyard, which gave us some stunning views of the Marble Church. We took some time to watch the armed guards marching too.

We also visited one of Copenhagen’s most famous areas, Nyhavn. It’s a beautiful 17th century waterfront lined by brightly coloured townhouses. I’m not sure there is any way to take a bad picture of this place. It is lined with restaurants and bars that can be very expensive but we just strolled along and looked at the boats.

We carried on past Nyhavn and walked up to see the Little Mermaid, continuing along the waterfront. The view across the water was pretty industrial but there was something so beautiful about it on that winter morning. We reached the Little Mermaid statue, based on the fairytale by H.C Anderson, a Danish author. There were a few tourists there but nothing overwhelming.

By this time we were pretty exhausted, having been up since 4.30am and having walked around 26,000 steps so we abandoned plans to go out for dinner and instead grabbed some bits from the nearest 7-11 and retired to our room. Already I felt like we’d seen so much of this beautiful city!