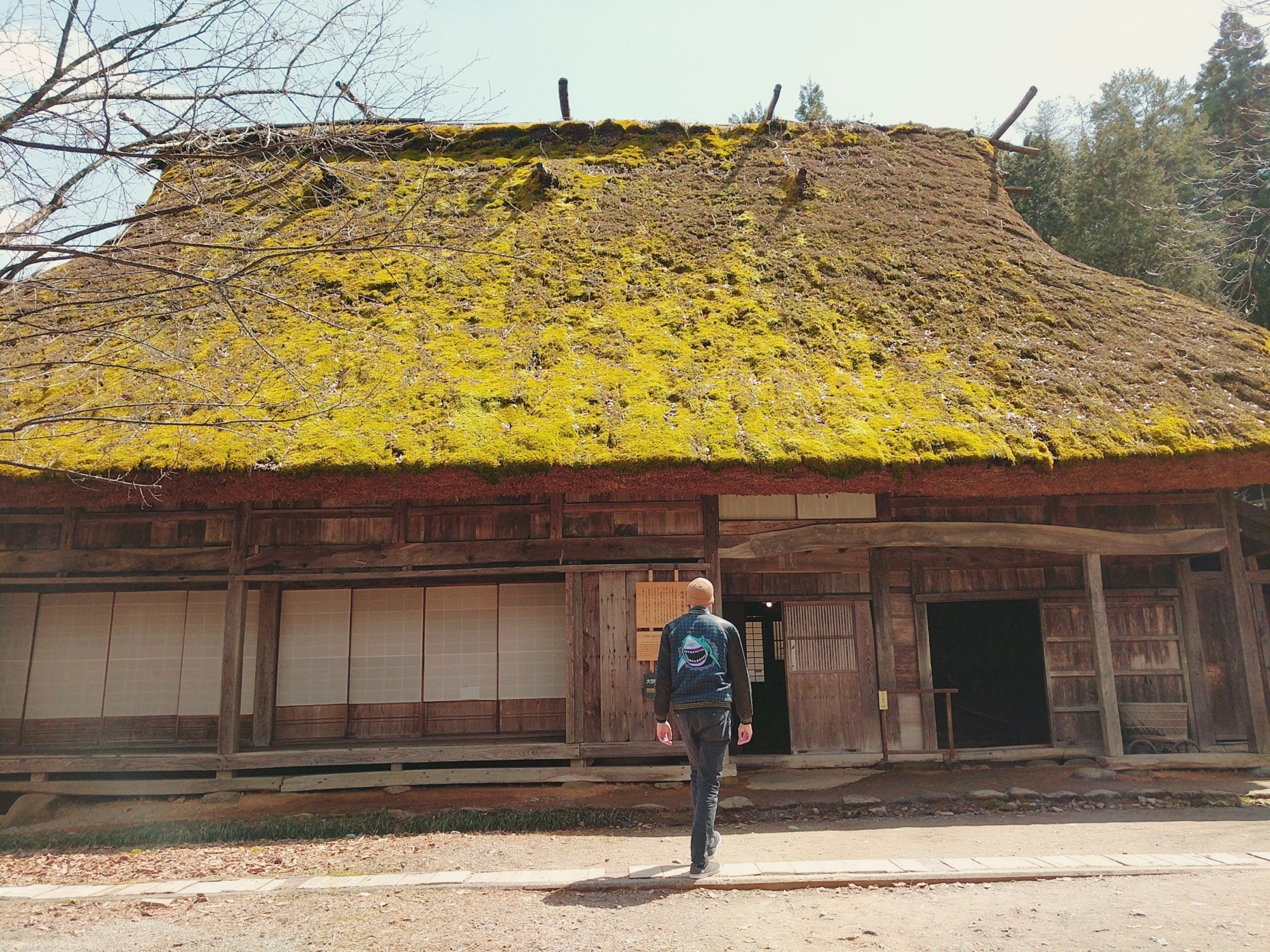 We woke up early so we could visit the Miyagawa morning market. This is a daily market, set alongside the river, where the locals sell their goods. I was shocked at how cold it was when we woke up, just 0°c, which I was absolutely NOT prepared for. Thank goodness Adam had packed a spare jacket! 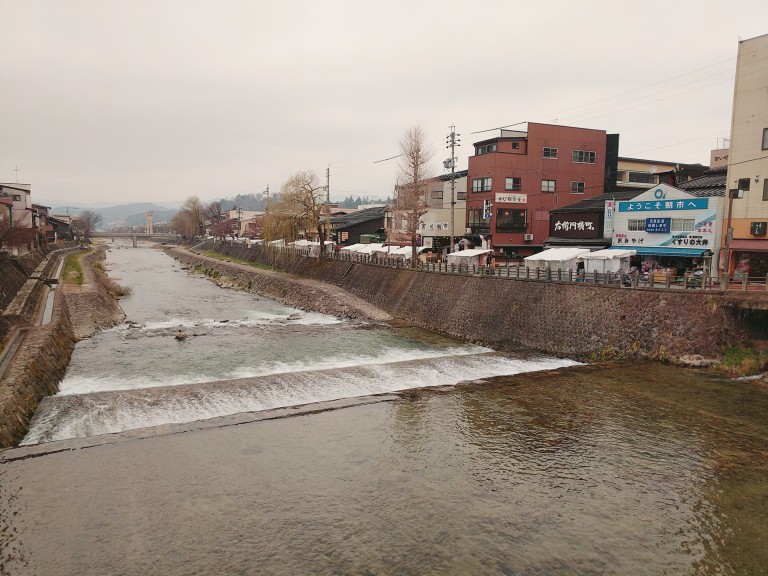 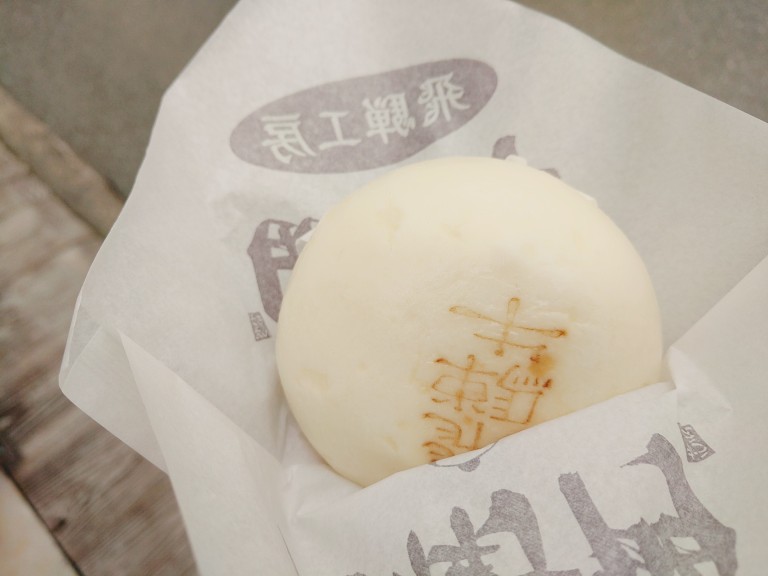 There were a few local stalls, though not as many as I had expected. However the shops which occupied the same street were very good and we ended up picking up a few things in them. It was certainly the place to pick up chopsticks and they had some good food places too. Adam and I picked up a Hida beef steamed bun for 500yen (£3.50) in the hope it would warm us up.

As we walked around we came across the Karakuri museum. I say came across it, I mean a Japanese man persuaded us to come in, the first time we’d ever experienced that kind of selling in Japan. We paid 600yen and walked into a relatively small room, mostly full of lion masks. Lions, or shishi as they’re known, are magical creatures that protect from evil spirits and stand outside a number of Japanese Buddhist shrines. 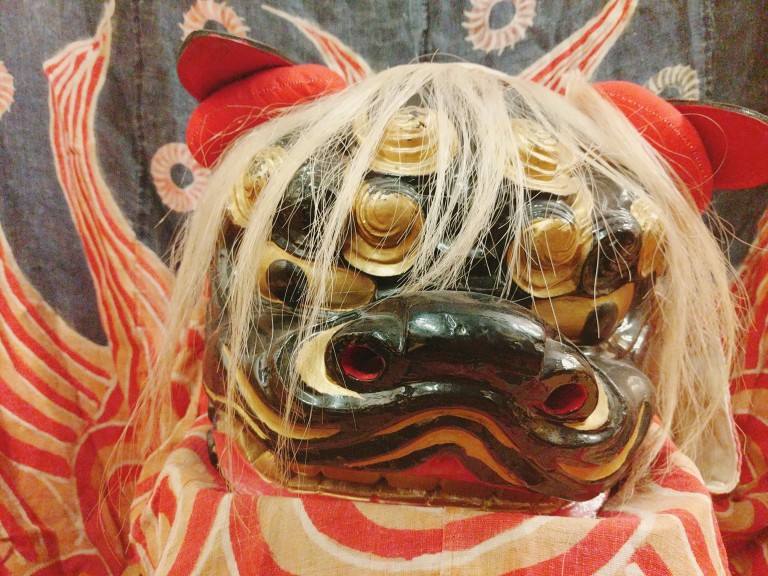 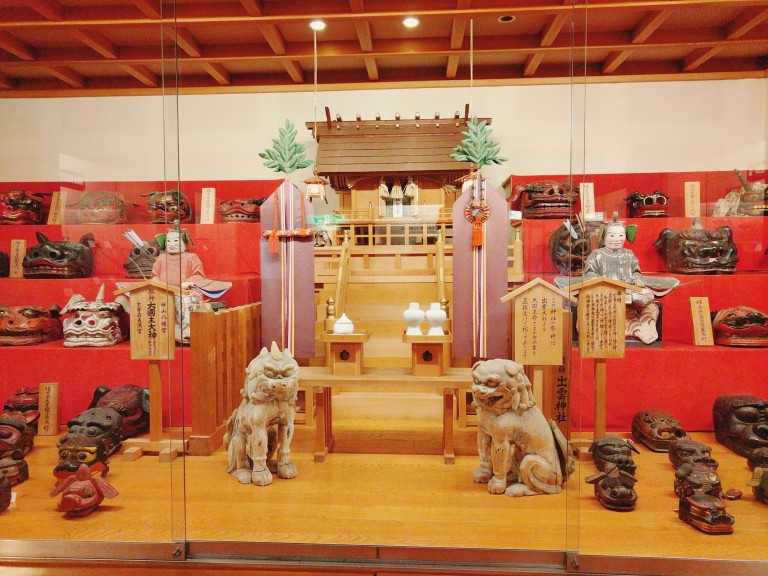 The other half of the museum was a stage, full of Karakuri puppets. The puppets are traditional mechanical puppets, originally made from the 17th-19th century. We watched a show and it was very impressive, especially considering the age of the puppets used. You can imagine the wonderment that would have been felt all those years ago when the puppet started to move, seemingly by itself.

My favourite moment (possibly of the whole year) was when a woman walked on stage with a large mug of green tea. Adam and I absolutely detest the stuff and spent most our efforts in Japan trying to avoid the concoction which the Japanese seem so eager to give away. There were only 6 of us in the audience and as soon as Adam saw the tea he whispered “oh no, what if she’s going to give the tea out to us all!” 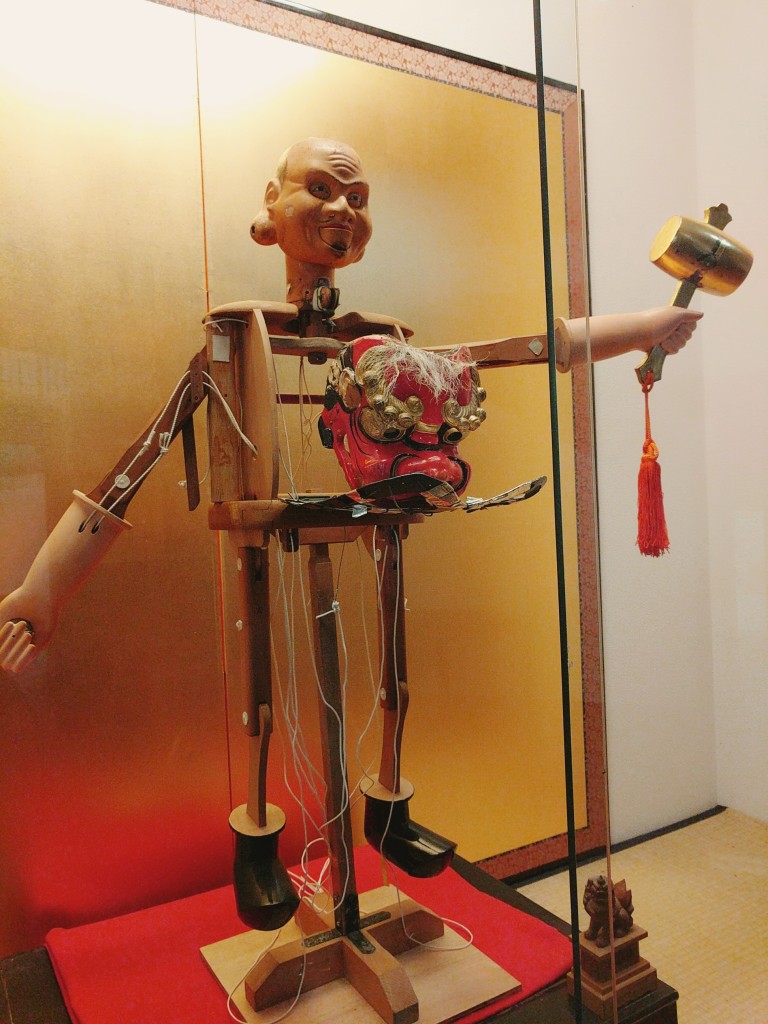 However a zashiki Karakuri robot soon followed her out. This is a traditional tea serving robot that moves when a cup of tea is placed on its tray. It moves for a set distance and then stops and serves the tea. “Ah thank God, the tea is for the robot,” Adam whispered.

Just then the woman gestured towards Adam to get up on stage and proceed to drink the tea that the robot was serving. I totally got the giggles as I watched Adam take a small sip and offer the tea back and the woman gestured he had to finish the whole thing. He wasn’t pleased haha.

From the museum it was only a short walk into the Hachiman shrine. The shrine dates back from the 5th century and is a beautiful place, set in a lovely wooded forest. It has some steep steps so it’s not for everyone but it was worth the visit otherwise. 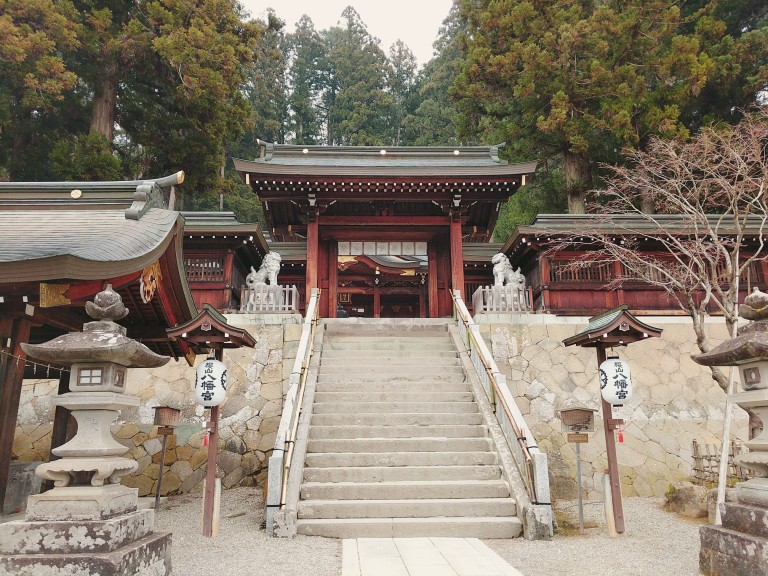 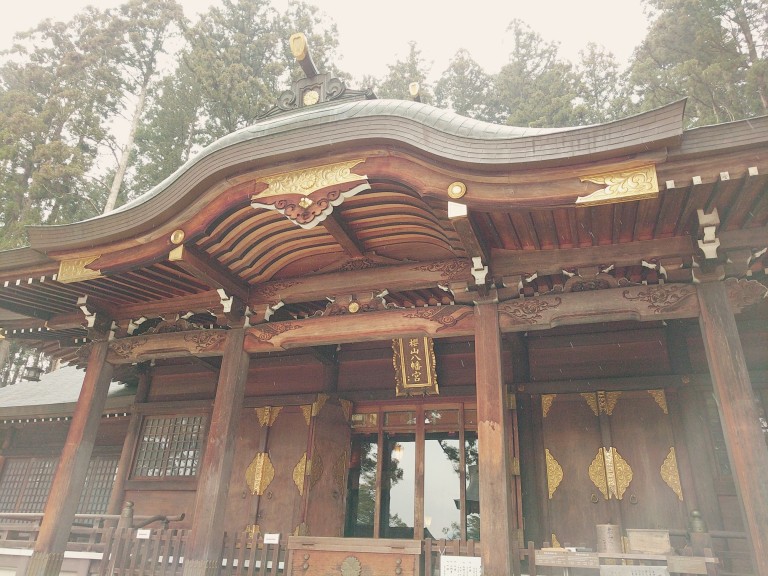 On the grounds of the shrine also sits the Matsuri Yatai Kaikan, which is a float exhibition hall. For 900 yen you can view 4 of the floats from their autumn festival. They’re incredibly impressive, they stand so tall and they’re so beautiful in their intricate details. It was amazing to see these floats, which are several hundred years old, so close. 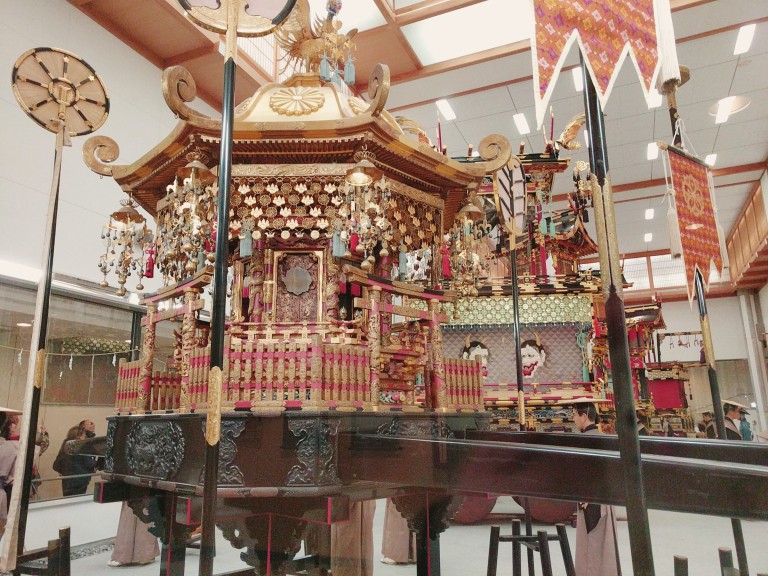 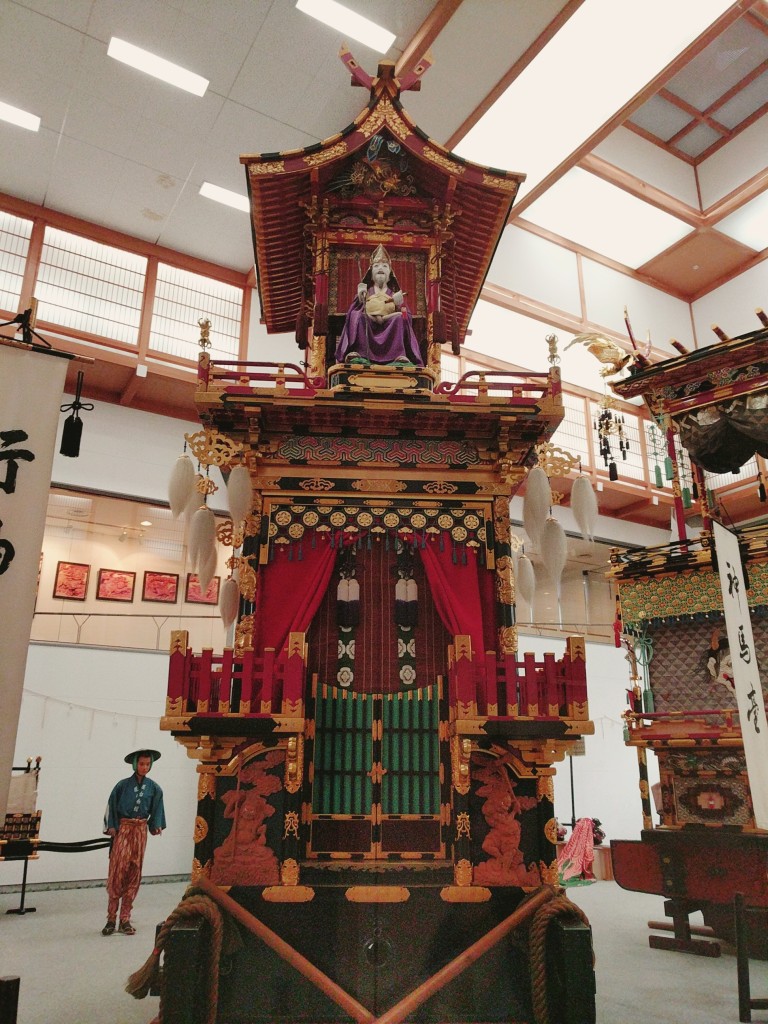 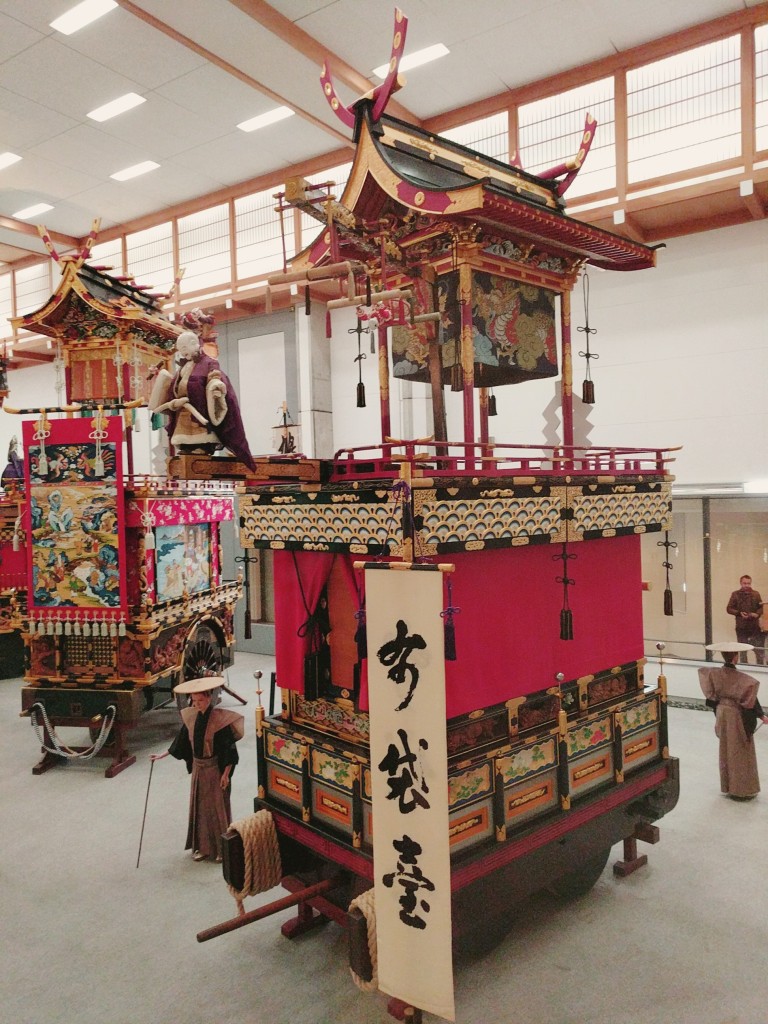 Included in the ticket to see the floats was a ticket to see the Sakurayama Nikkokan, which was housed next door. You know those model villages we’re so found of in England? Well this is a model temple! The Toshogu shrine in Nikko to be precise. The detail was amazing and the fact we had actually visited the temple ourselves on our previous visit to Japan made it that much more enjoyable. 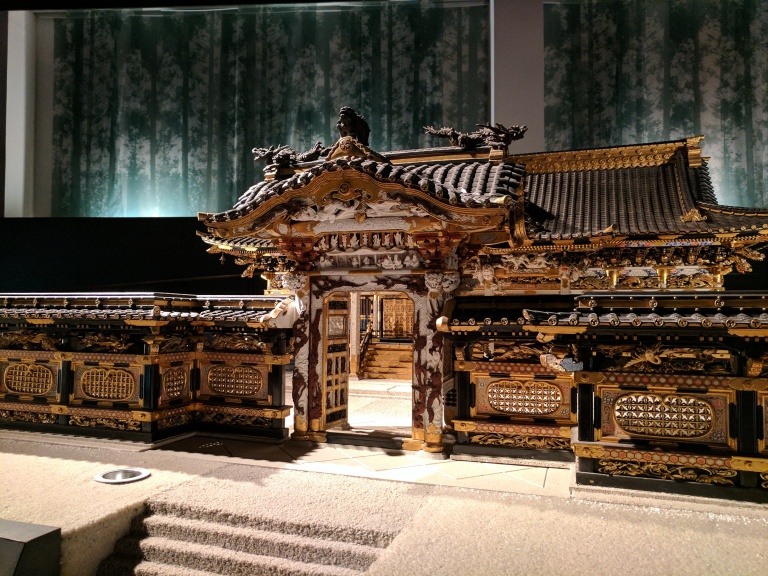 We then walked onto the Hida folk village, it was about a 25 minute walk and so worth it. We did it at a nice strolling page as it sloped gently uphill. I think there is an option of a bus but I would recommend the walk, we saw some interesting houses and got some beautiful views on our journey. 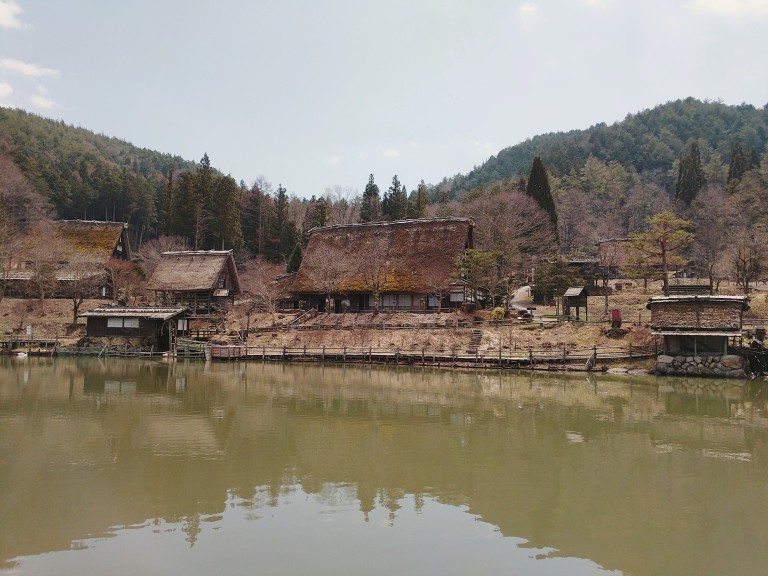 The folk village is an open museum showing traditional houses from 1603-1867. Many of the buildings were moved from their original site in order to preserve them. We paid about 700 yen entry and entered the village of approximately 25 houses. The previously chilly morning had given way to a very beautiful afternoon and it was such a joy to walk around. 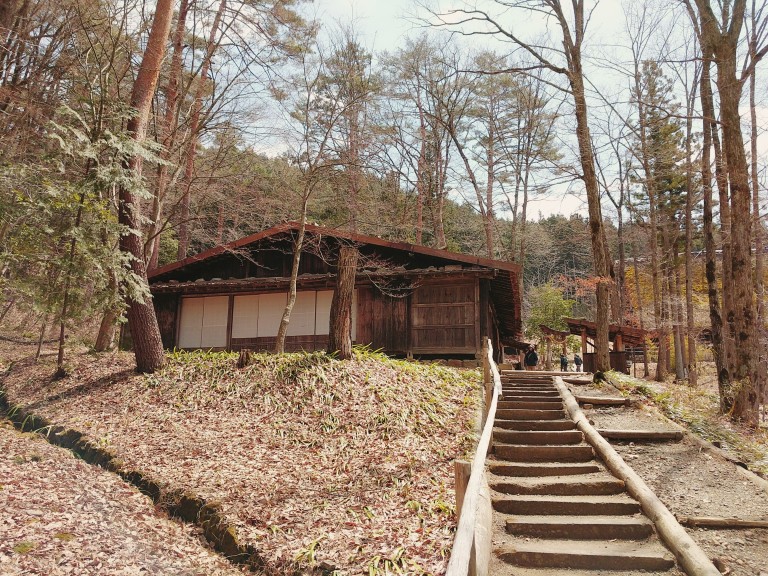 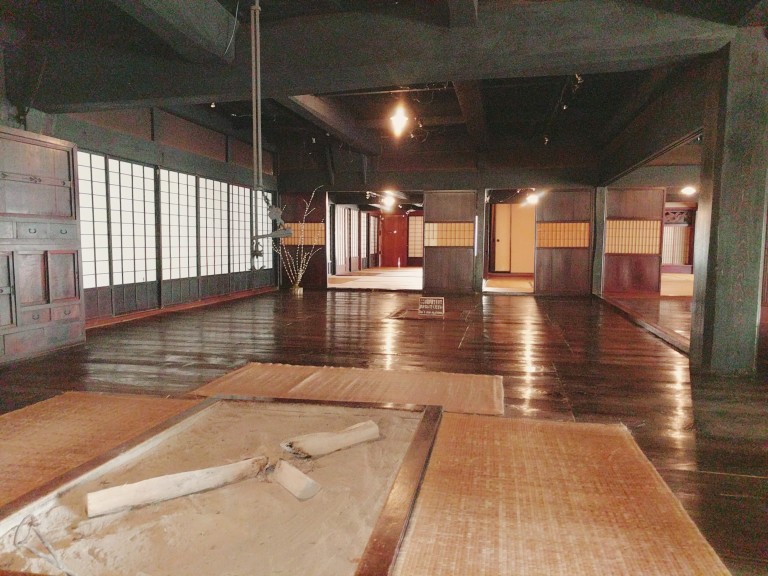 Many of the houses you could enter and see relics of past lives, traditional cooking utensils, silkworm cocoons, weaving tools. It was all very interesting. 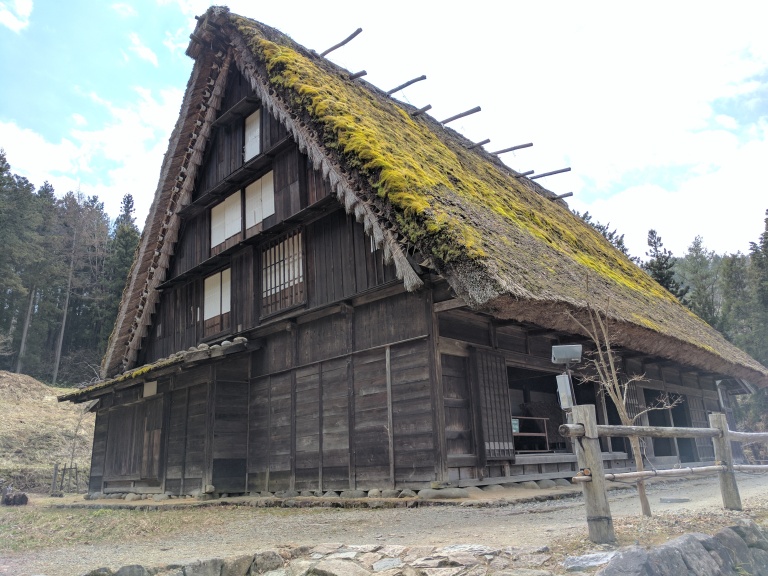 We walked back into town to Sannomachi street. It’s a traditional street with old merchant buildings and is known for its abundance of sake breweries. Unfortunately despite trying I do not like sake so we didn’t indulge in any tastings (of which there was ample opportunity) and instead strolled along, taking in the atmosphere. We also picked up some traditional rice crackers, cooked straight in front of you for 100 yen. 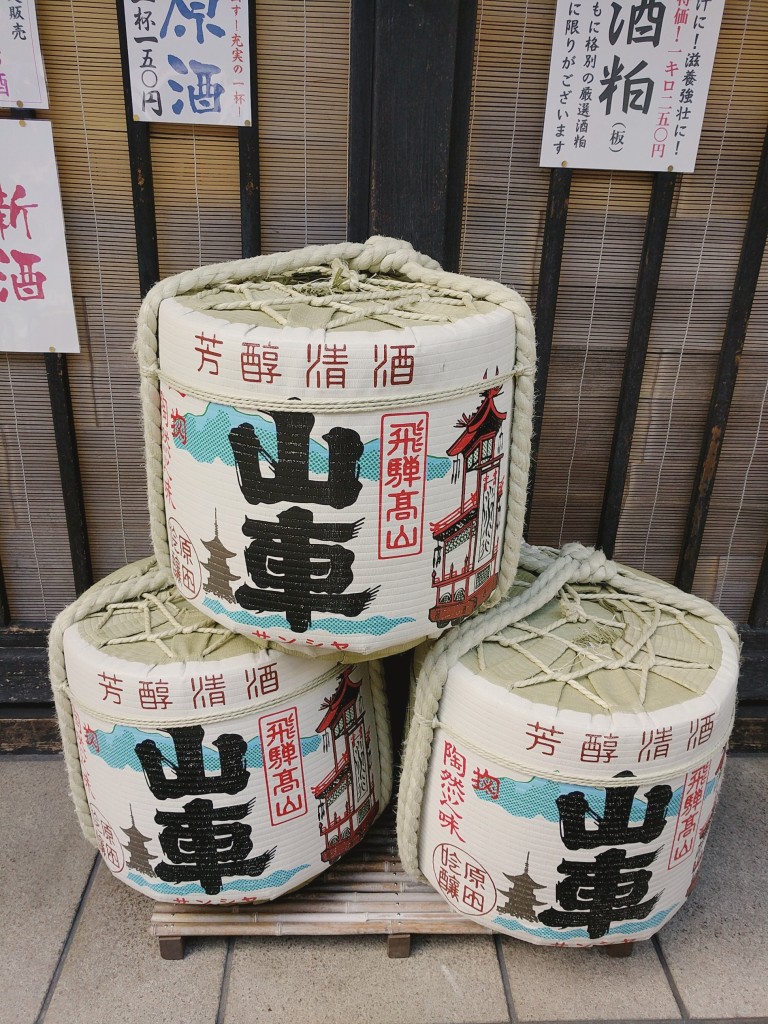 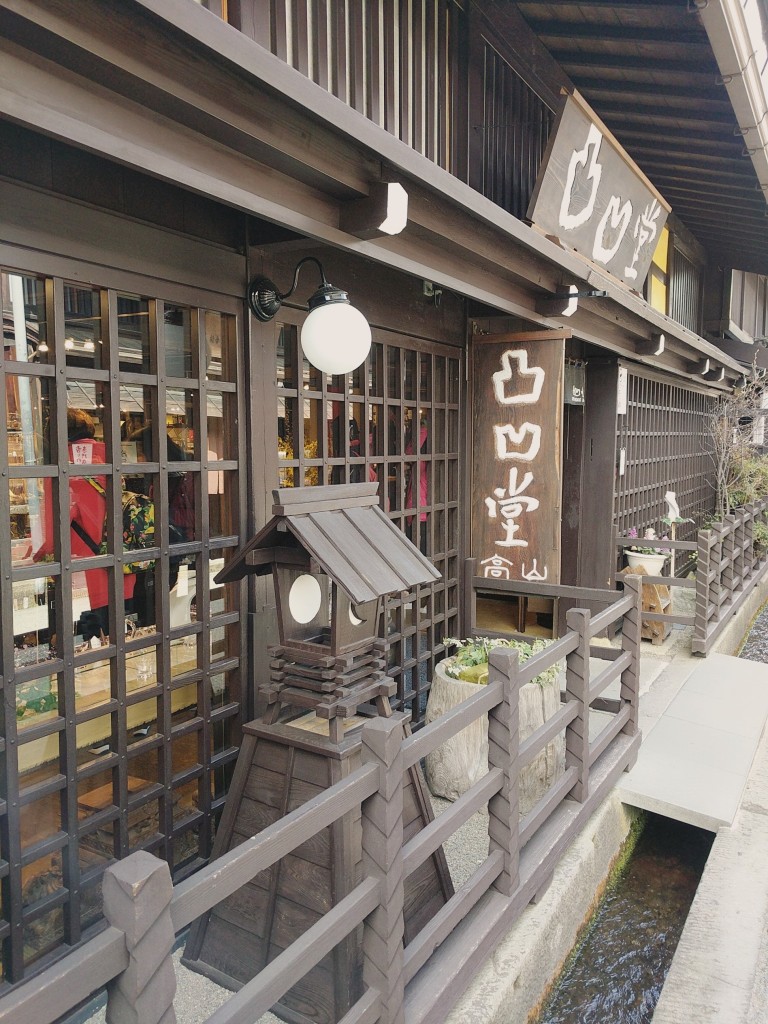 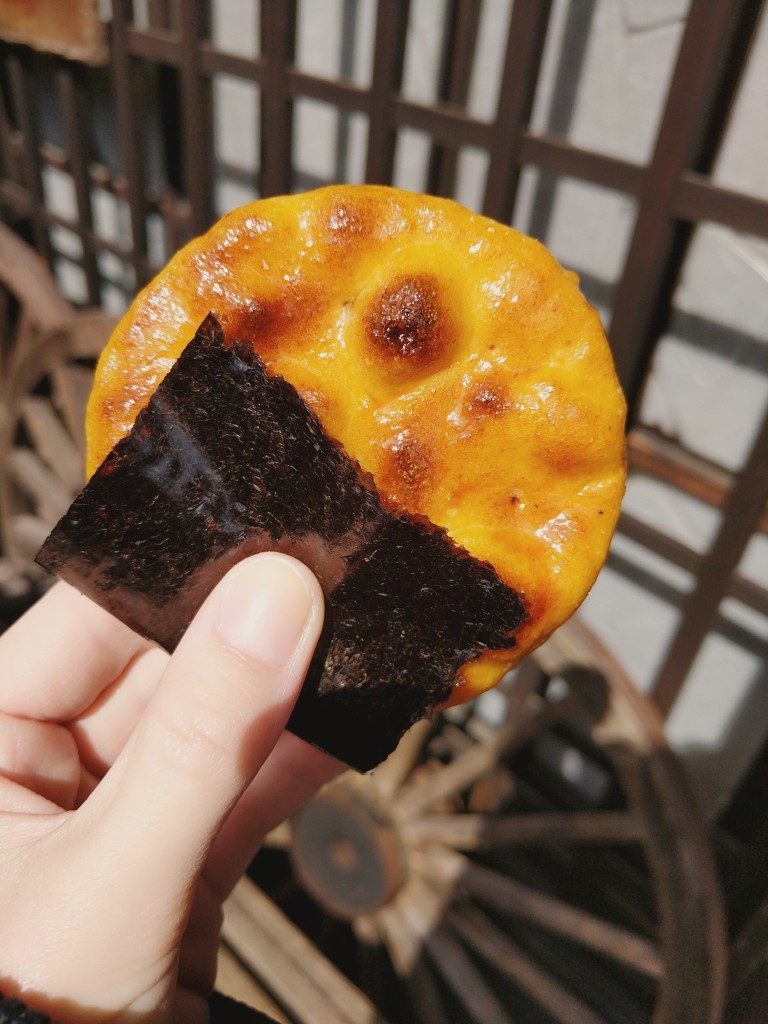 We stopped at a restaurant right by our hotel for some ramen. For 1000 yen (£7) I had some ramen and a roast pork bowl. Adam had an Italian inspired tomato ramen, which was quite different. I also tried some of the locally brewed peach liqueur, a replacement for not trying the ramen. It was all rather yummy! 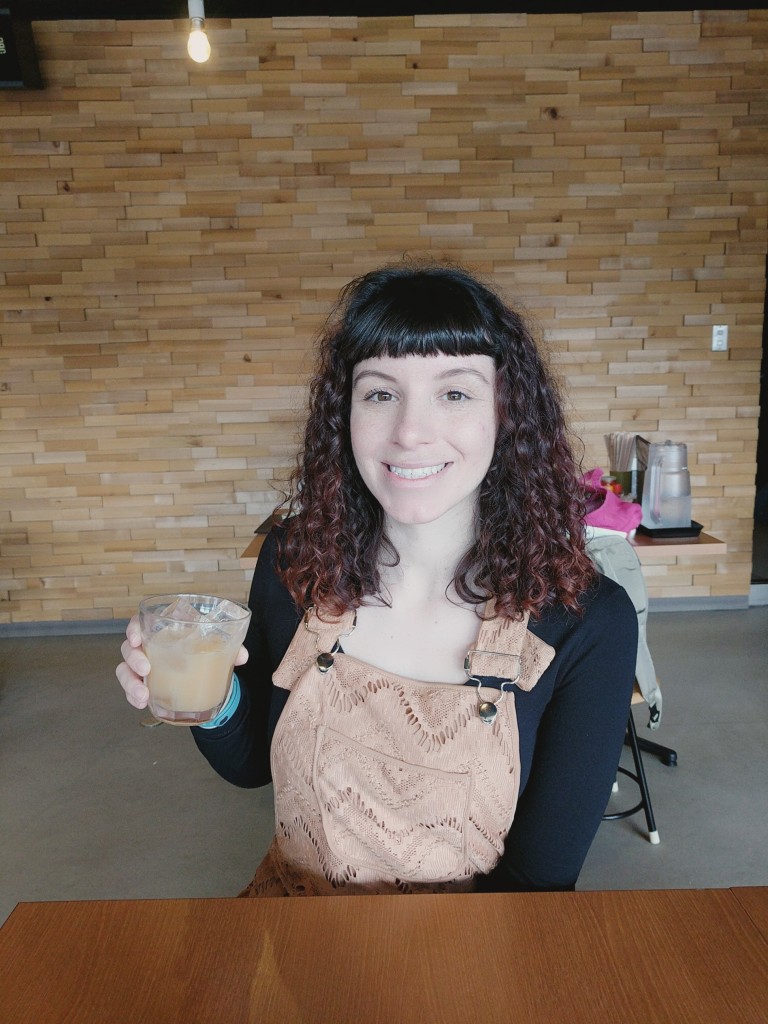 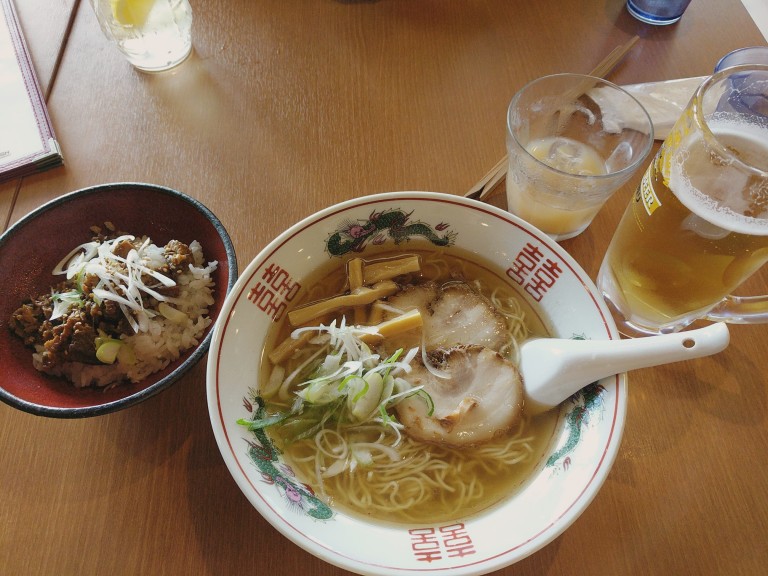 It was only about 5pm by this point but we were sooooo tired. As you can see from this post we’d already seen so much in that time so we went back to our hotel and napped! We woke up a while later, went to the convenience store that was underneath our hotel and then returned back to bed!