We awoke this morning to a downpour, so typical for the Scottish summer! Luckily we had prepared for this and I had my rain mac at the ready. We were out by 8am as we’d booked a tour to see the lochs with Rabbies Trail Burners. The 10 hour tour was going to cross off quite a few things we fancied seeing and at £35 each we felt this was good value.

We met on George Street, which was centrally located, although thanks to Adam insisting he’d heard a man tell us to wait in one place when we were really meant to be waiting at another, we were nearly late. It was a small group tour, only about 10 of us, although due to our lateness Adam and I weren’t able to sit next to one another.

Our first stop on the tour was Tarbet, a small village, where we got our first glimpses of the beautiful Loch Lomond. Loch Lomond was what first inspired this whole trip for me, the breathtaking pictures of the loch surrounded by mountains and trees, it looks so idyllic. 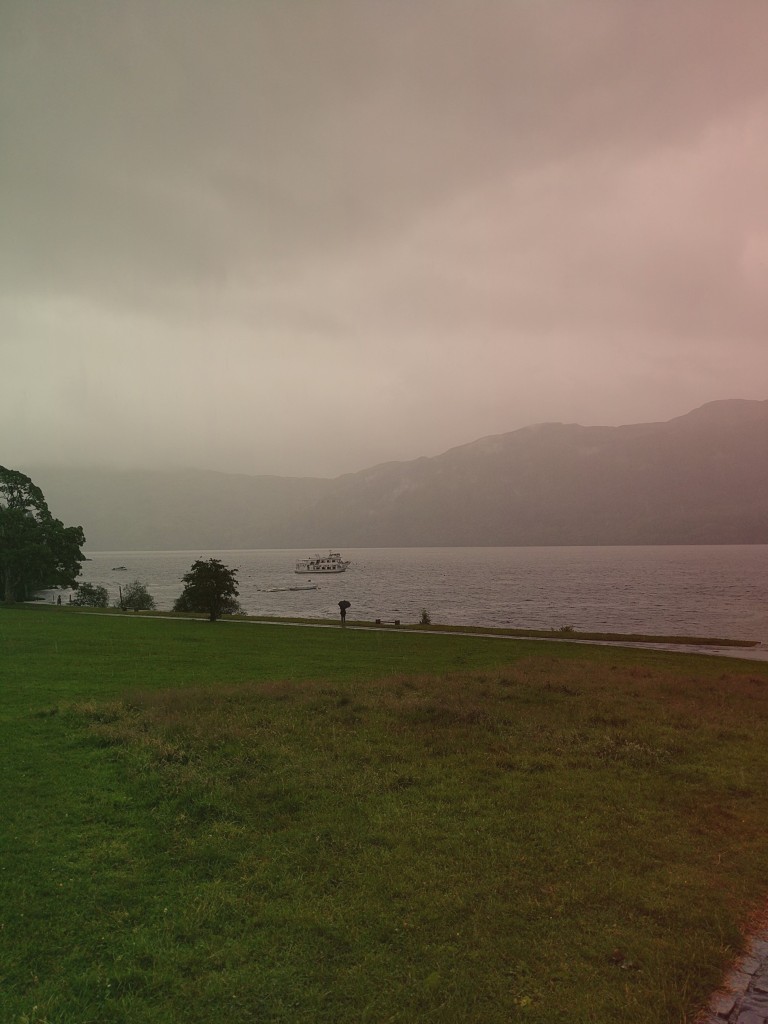 The heavy rain continued through the morning as we drove through the ‘rest and be thankful’ mountain pass. The scenery we passed was so pretty but unfortunately I was unable to get a good picture through the raindrops.

We briefly stopped at Inveray Castle, a castle housed on the shores of Loch Fyne. The guide gave us the option to enter the castle, which featured a collection of muskets and swords, or stroll through the town of Inveray. The majority voted for the town stroll so we headed over.

Inveray was a very quaint town with Loch Fyne sitting at the base of its high street. Our half hour stroll of the street was very successful. We were able to grab a Christmas decoration (our standard holiday souvenir) from a shop there, buy some jewellery for a birthday gift and visit a whisky shop for a tasting too! The locals were all so friendly too, something we found the norm in Scotland. 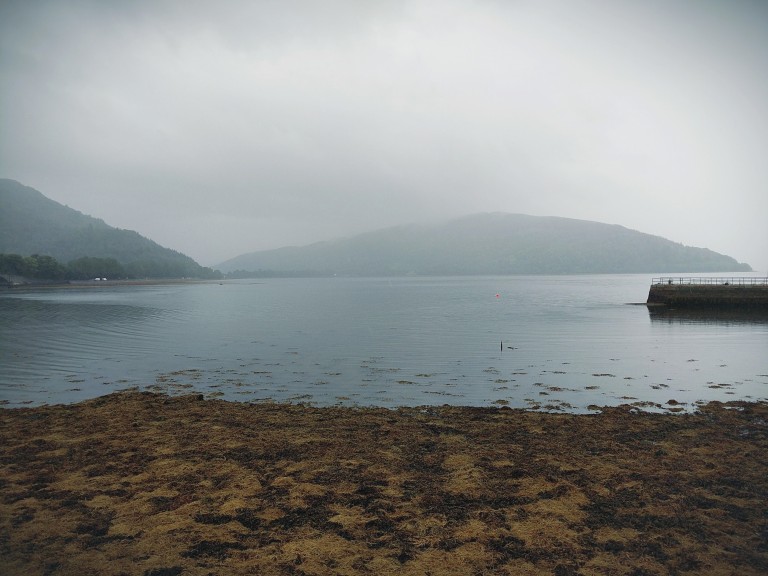 We were soon back on the bus and drove past Kilchurn Castle, the ruins of a 15th century castle which sits on a rocky peninsula overlooking Loch Awe, before stopping at St Conan’s Kirk.

St Conan’s Kirk is a church overlooking Lake Awe, tucked away amongst honeysuckle and roses. Inside the numerous windows made the most of the sunshine that was struggling with the clouds outside. 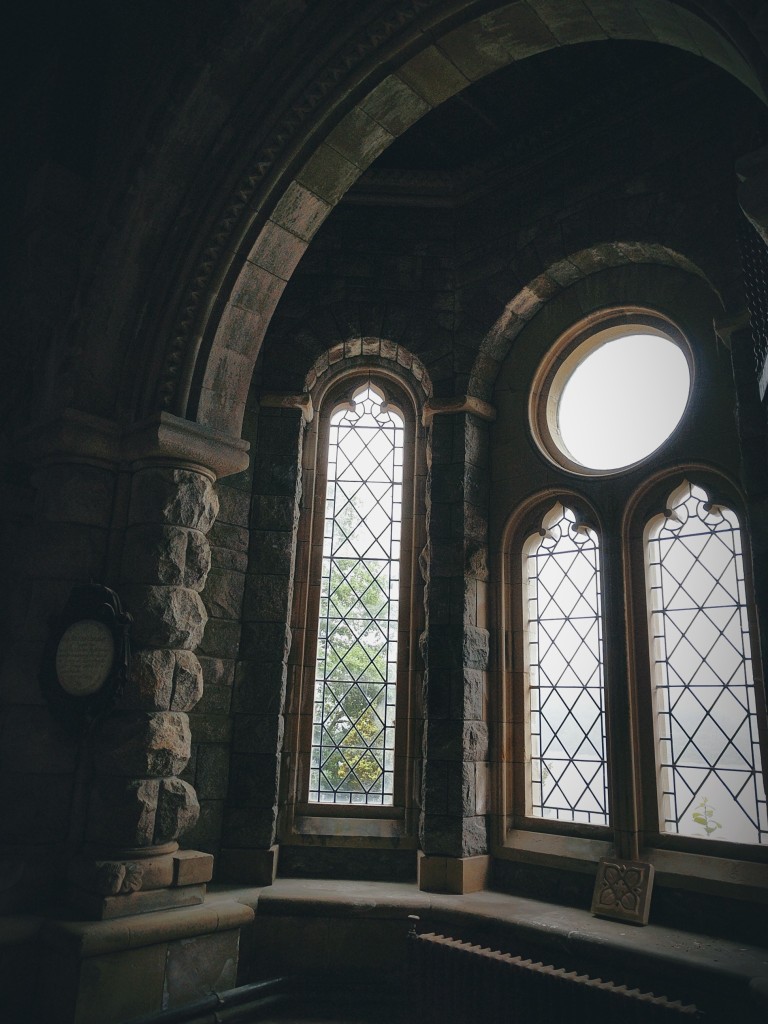 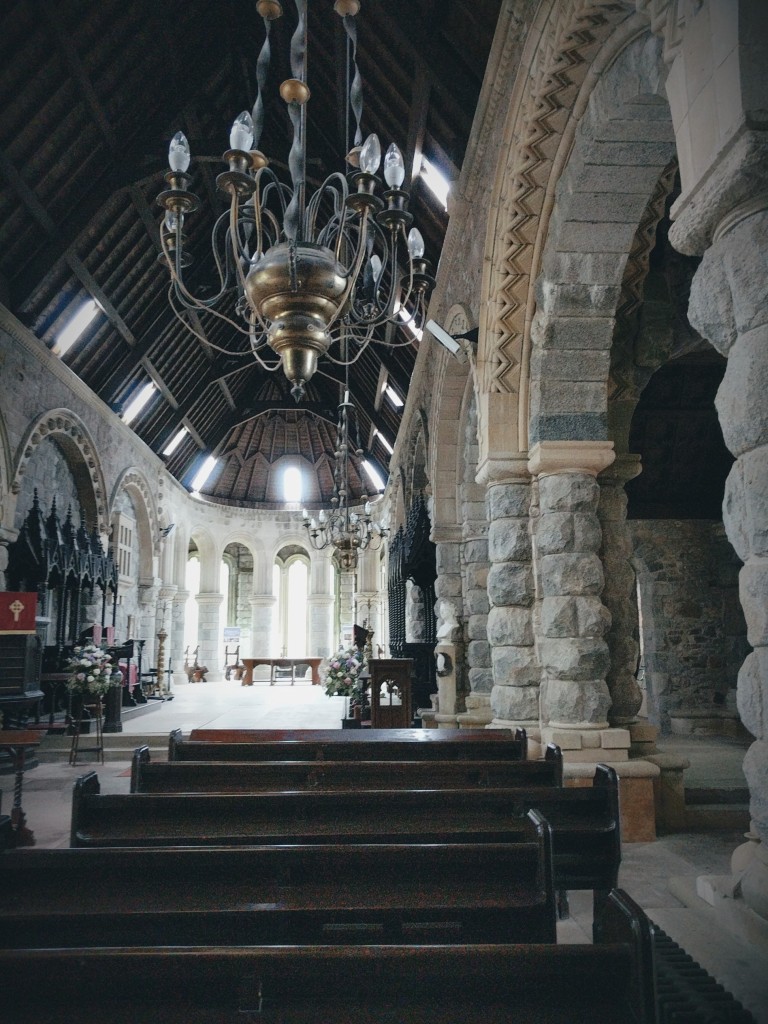 My favourite part of the church was the bone fragment, supposedly from Robert the Bruce. That’s my dads name and I had found it very interesting finding out all about the Bruce clan whilst driving through the countryside. 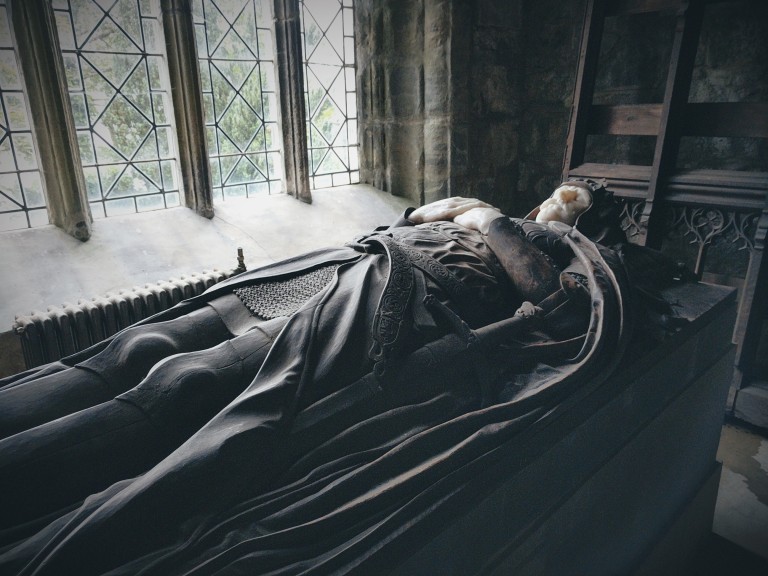 I wandered out the back of the church, which faced the loch, and found it very atmospheric as the rainy mist sat over the lake. I was the only one who had managed to find the back door so there was an eerie silence as I stood alone on the balcony.

As we drove over to Oban, a resort town with a gorgeous horseshoe bay, the rain subsided and although still cloudy, we were able to depart the bus without our hoods up. We were given two hours to explore the town so we first walked the length of the harbour before deciding on a lunch spot. 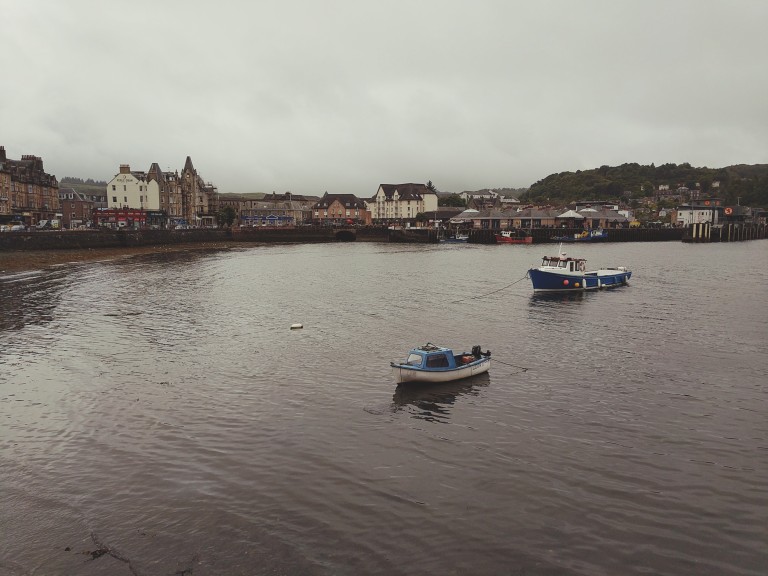 After browsing a few places we decided on Cuan Mor, which drew us in with its traditional Scottish fare and its very reasonable lunch menu. Adam went for fish and chips, a choice from their lunch menu whilst I decided I really wanted some scallops and splashed out from the A la carte. Both meals were absolutely delicious, the scallops were probably the largest I’ve ever had.

We had a little stroll around Oban after lunch, enjoying the harbour and I was also excited to find the worlds smallest whiskey. Things are just better in miniature! 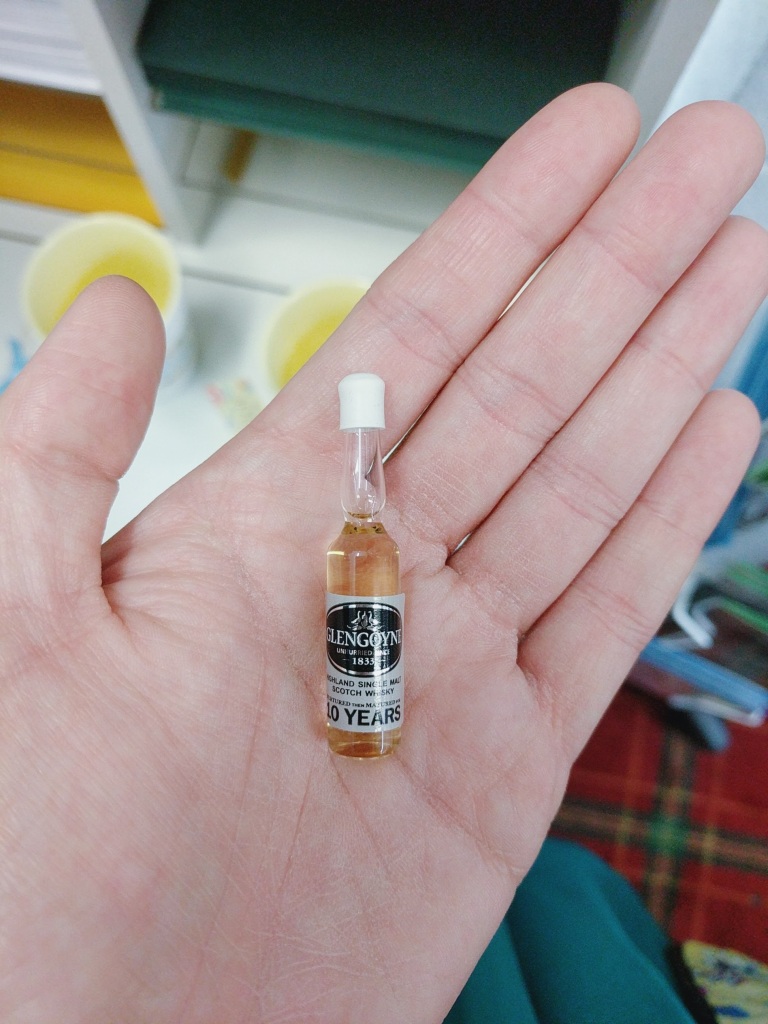 After getting back on the bus a sudden heavy rain downpour started and soon ruined any photo opportunities of our next stop, the Castle Stalker, a four storey keep which sits on a small island in Loch Laich. It was in such a picturesque setting, surrounded by mountains and is one of the best preserved medieval keeps in Scotland. I feel like a return journey to the lochs is needed! 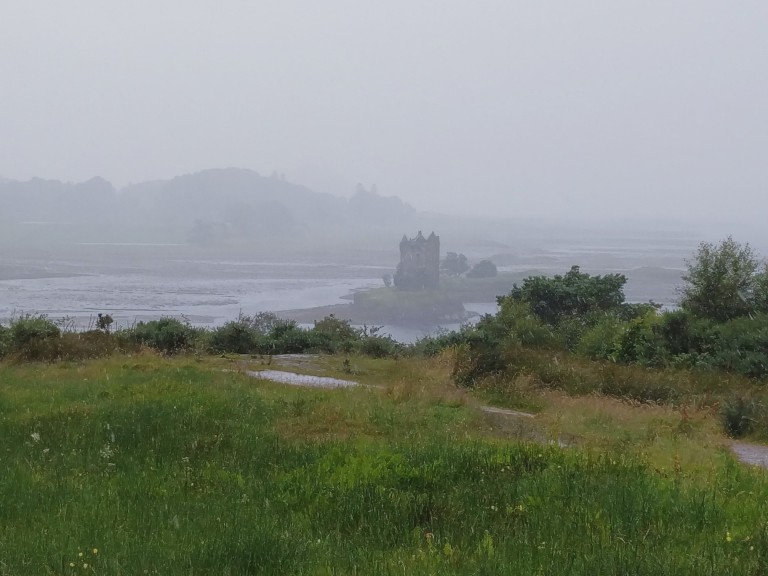 We were done with castles for the day and headed into the countryside. We were able to see Buachaille Etive Mor, a mountain at the head of Glen Etive, one of the most recognisable mountains in Scotland and then drive through Glencoe, where the three sisters (three large ridges) sit. Due to the rain everywhere we looked there were small waterfalls trickling down between the mountains, it was pretty magical. The rain was pretty light at this point, just a mist, and it really turned the countryside into something mystical.

As we started approaching Rannoch Moor the sun really came out and we were blessed with some of the most beautiful views of the moorland. Scotland really does have some of the most stunning countryside in the world. Our guide stopped on the roadside and we went for a 20 minute walk along the moors, it was windy but warm and was a real highlight of the day. 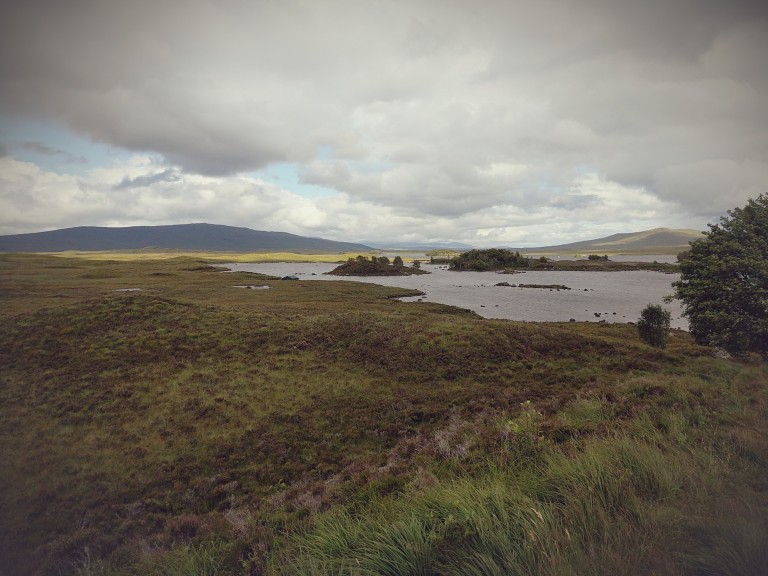 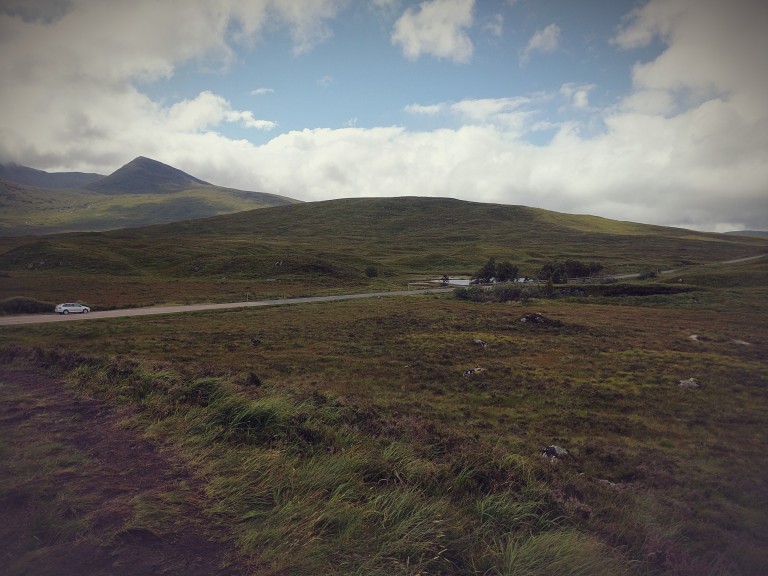 Our guide also treated us to a stop at the Falls of Falloch, a waterfall just along the road. It was quite impressive and unexpected. You pull up to a little car park and this huge waterfall is hiding just behind it.

Our final visit of the day was the town of Luss, where we could spend an hour. By now the sun was well and truly out. Luss sits right on the shores of Loch Lomond and the day’s weather had cast a gorgeous rainbow over the water. 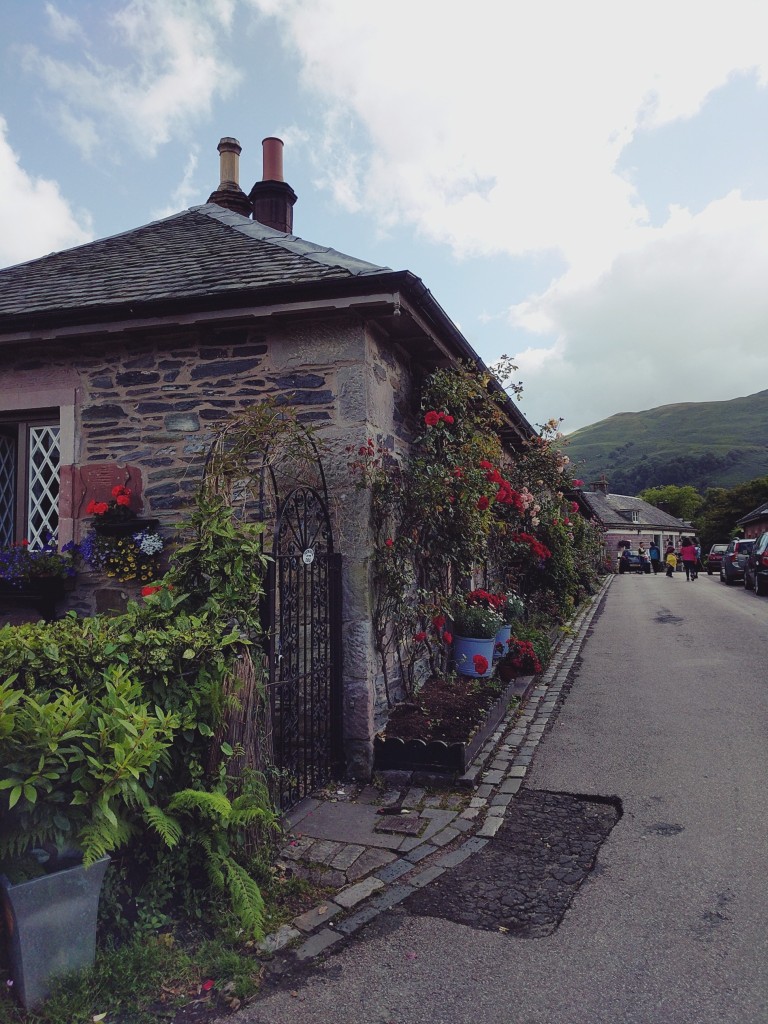 Luss was such a charming little village with cute cottages, lots of flowers and the most gorgeous views of the Loch. It had been a long day, by this point it was about 6pm but we’d had so much fun and seen so much. The tour was so informative, our guide was so great and we were never bored. 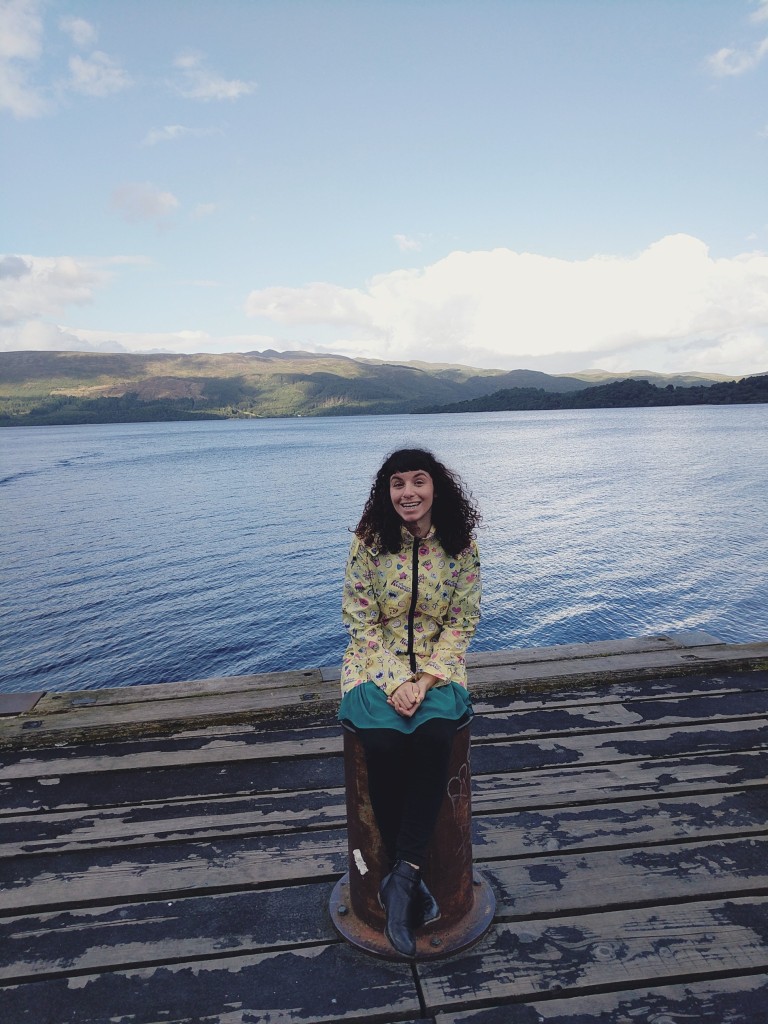 We were soon back in Glasgow and around 7.30pm went for dinner at the Corinthian. It was a gorgeous restaurant which ran a fantastic pre theatre menu where 3 courses were just £15.95. The venue was beautiful and the service was so friendly. The food? Absolutely delicious!