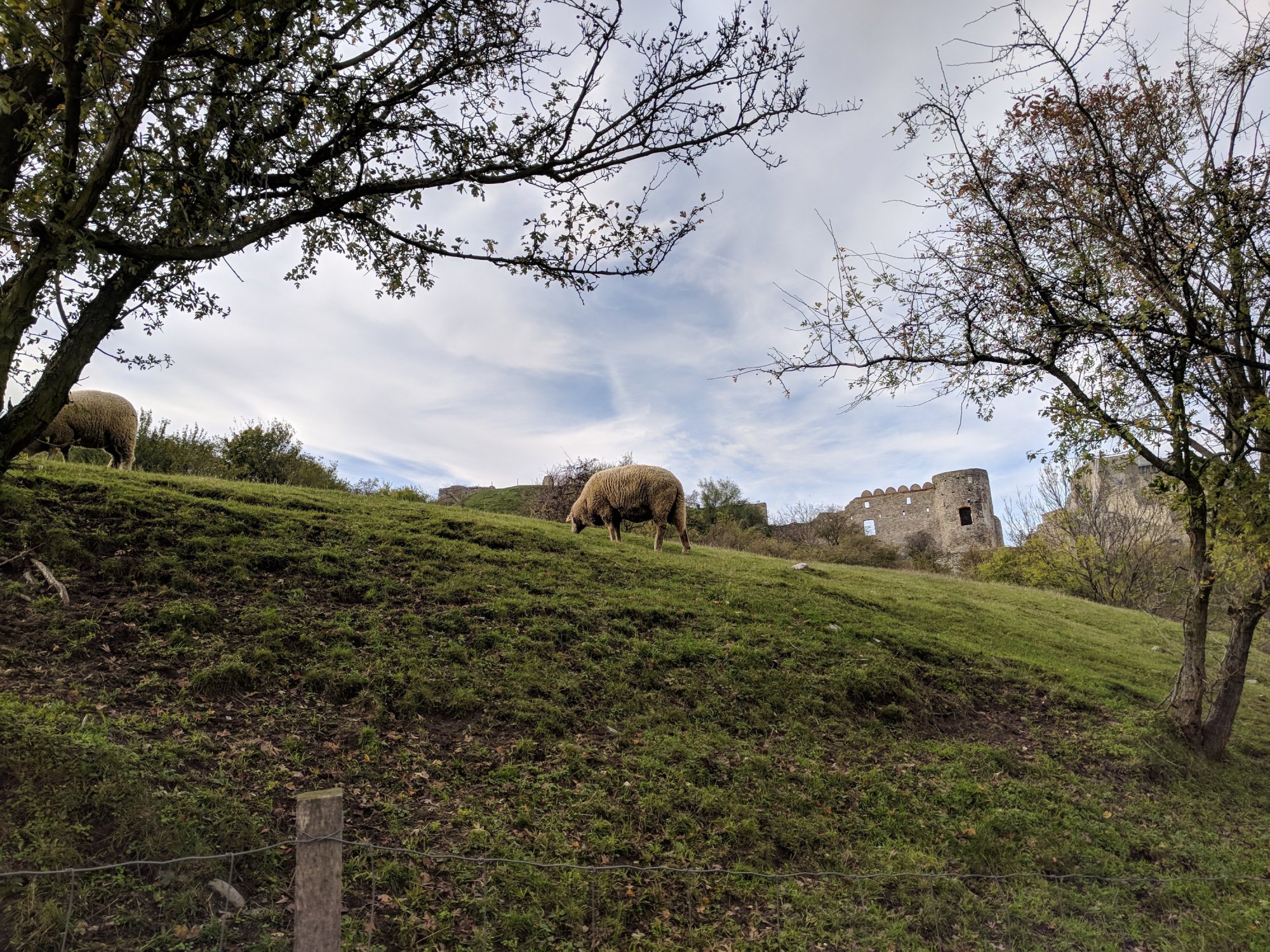 Another morning, another lie in and we were soon walking to the ‘Most SNP’ stop to catch a bus. We were catching the number 29 bus for our trip to Devin Castle, something that I’d read again and again was a perfect day trip from Bratislava.

The number 29 left from underneath the bridge and the 20 minute journey cost a very affordable 1.10 euros. We caught the 12.10pm bus however we got a bit confused which stop to get off at. We ended up getting off too early after we made the decision to follow a school group that we assumed would be going to the castle…they weren’t.

I have absolutely no regrets about our actions as we were about 20 minutes from the castle, with the walk taking us alongside the beautiful Danube river. It was so incredibly peaceful and we had lucked out with another sunny day. 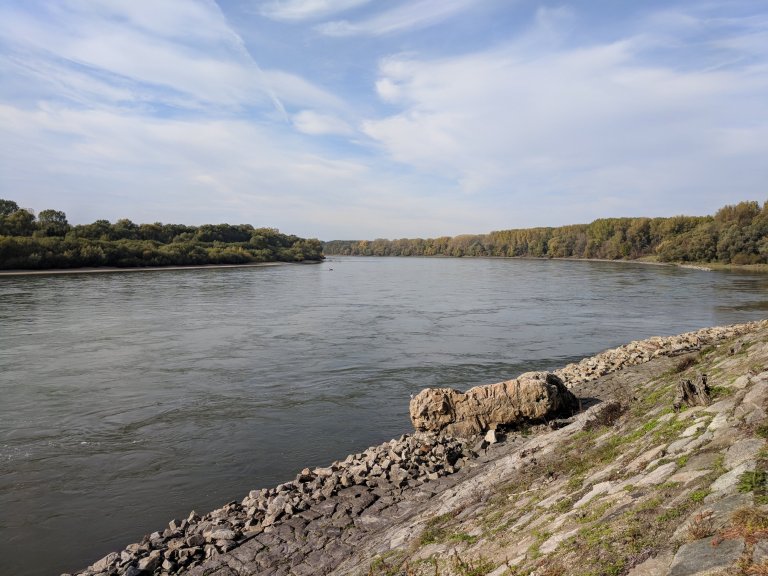 From our walk we could see the lone maidens tower, a place that legend tells us a bride used to throw herself to her death after her family killed her groom. How true that is I don’t know but it was certainly impressive to look up at! 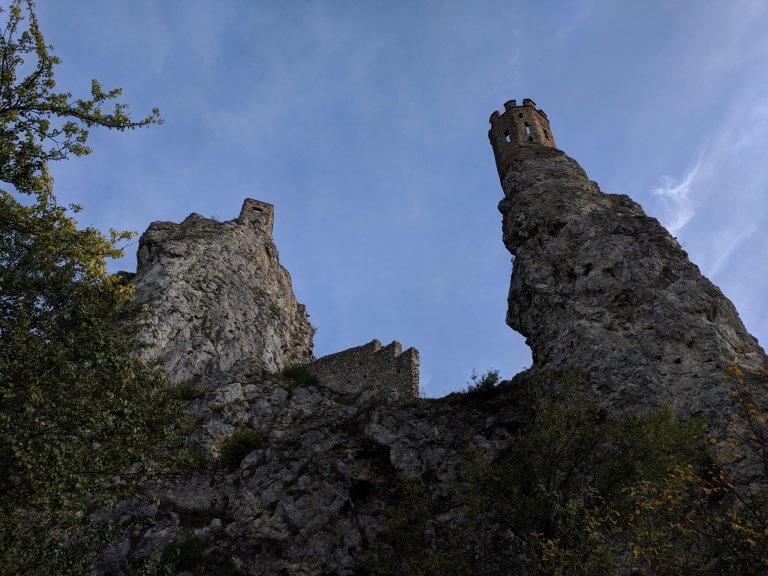 Devin Castle is one of the oldest in Slovakia and has become a national monument but was left in ruins after Napoleon decided to blow it up in 1809. Restoration is going on at the upper castle, which I believe is meant to be completed any time now. 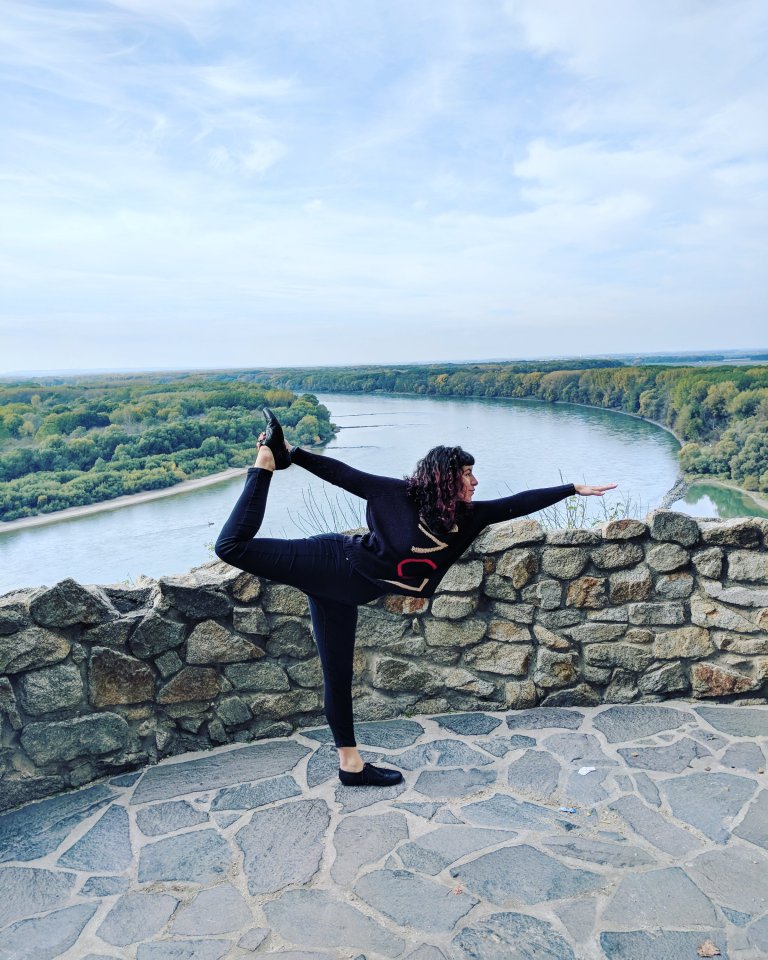 Aside from the castle there is a few things around to see, from foundations to sheep, historical gates to statues. On a lovely day, such as the one we had, it’s certainly a nice place to spend a bit of time. 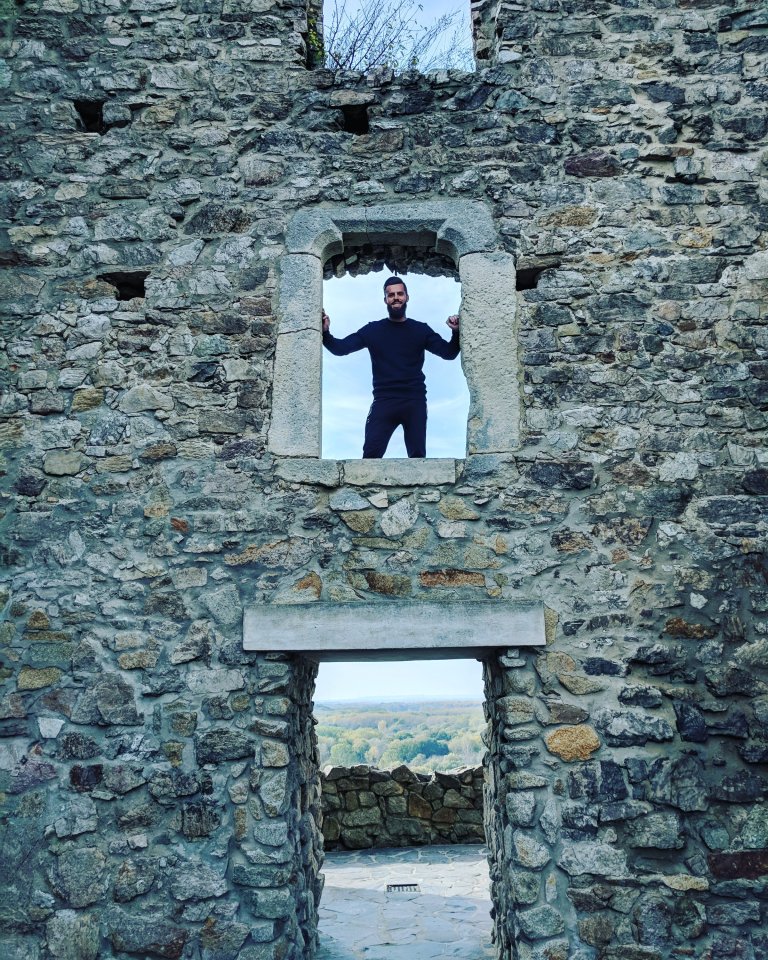 The castle sits 212 metres above ground, ensuring amazing views and that’s the real selling point of Devin Castle. The ruins are incredibly picturesque and fun to explore. Visiting in ‘off season’ meant there was hardly anyone around. 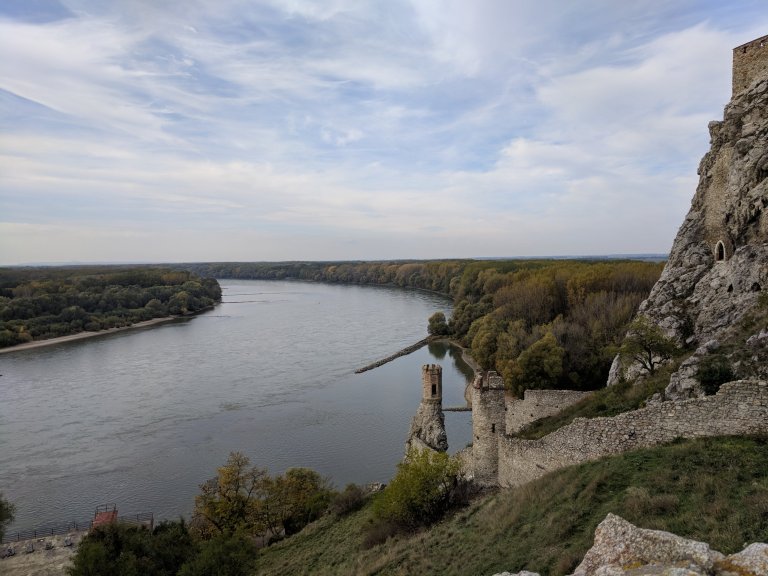 We spent about an hour and a half looking around before getting the bus back. There was no ticket machine at the stop we left from and the bus driver didn’t seem to be able to sell them to us so I was a bit confused over what to do in that situation?

When we returned to Bratislava the first thing on our mind was food and it was certainly time for lunch! We popped into re:fresh, a restaurant just around the corner from our apartment. 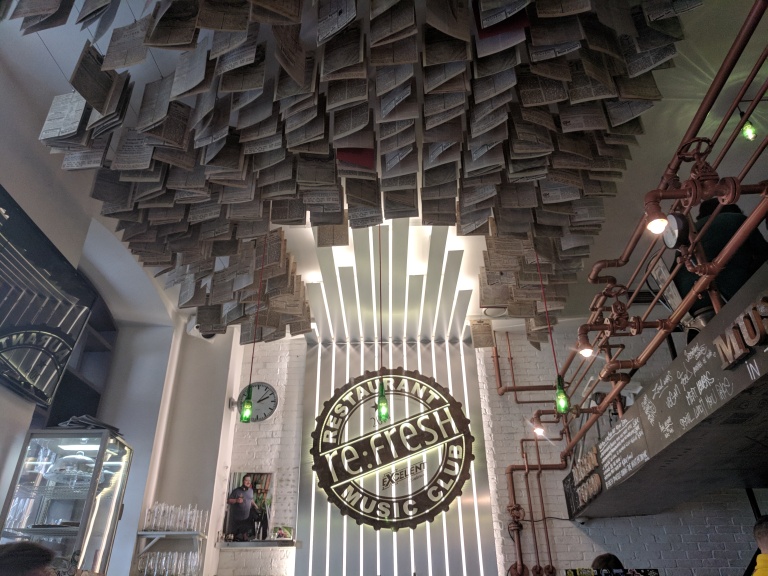 The decor was pretty funky and they had an amazing lemonade selection, which I took advantage of. I chose a pulled beef stew, which was absolutely delicious, and we left feeling very satisfied. 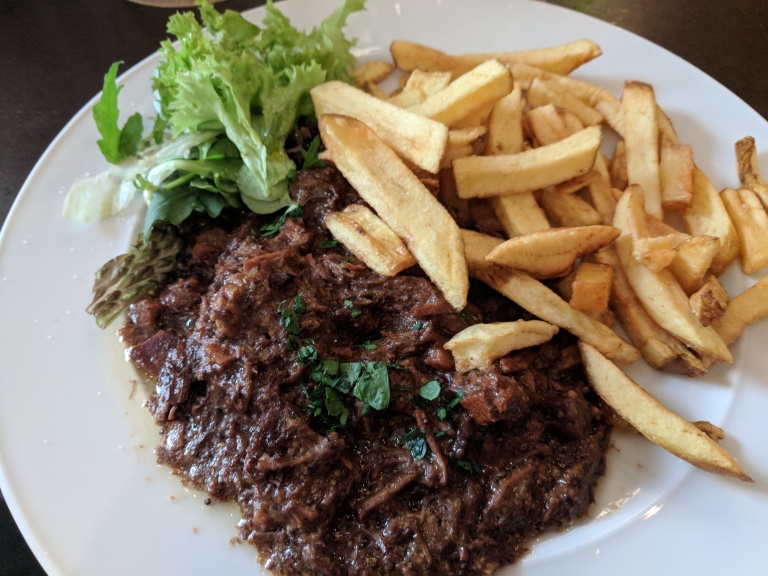 We had a walk around the town, happening upon a little honey shop called cera-mel, where Adam and I purchased some beeswax candles, which smelled divine when we lit them later on once home. 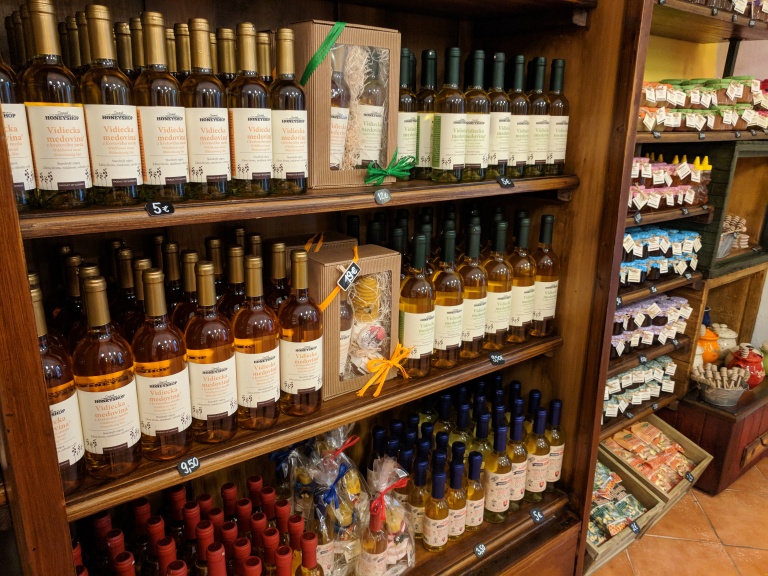 Strolling around Bratislava is wonderful, every side street will take you to a hidden tower, a secret church, a gilded balcony, a funky shop. It really is a treasure trove of a place! 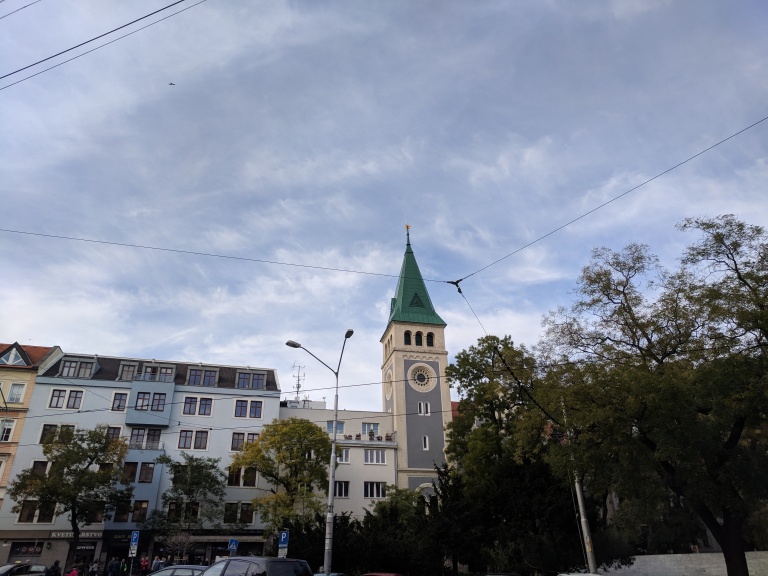 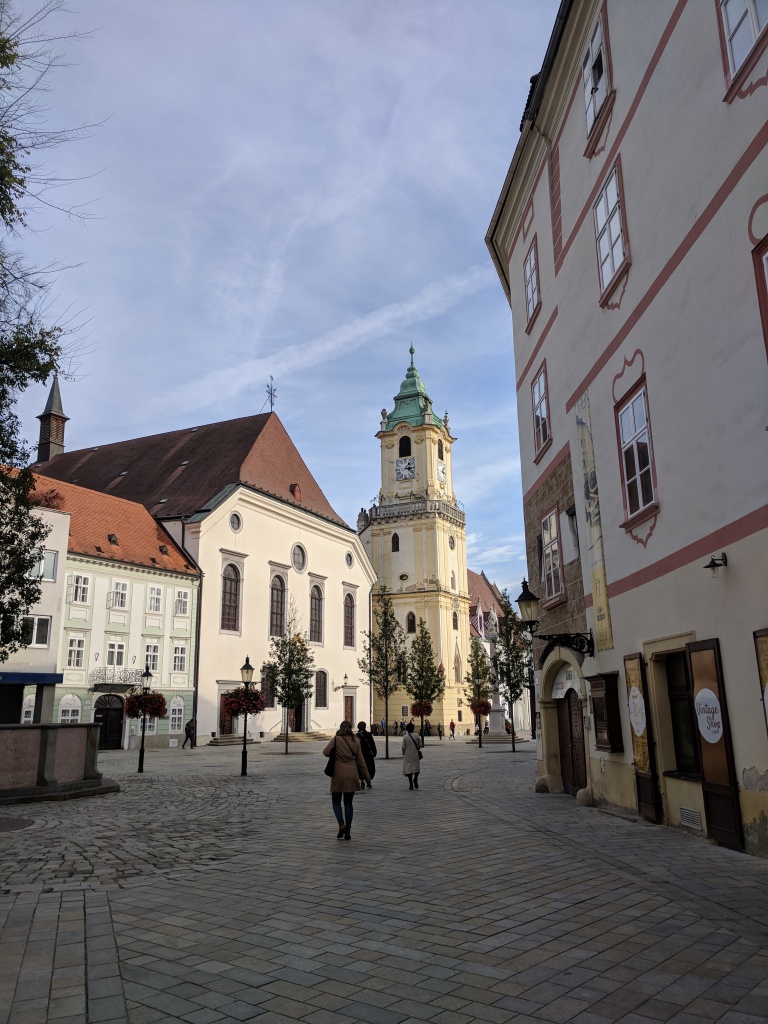 Our walk also took us past Primates Palace, a gorgeous pastel neoclassical palace built in in 1700’s. It is open to the public although unfortunately we didn’t have time to delve inside so admired it from outside instead. 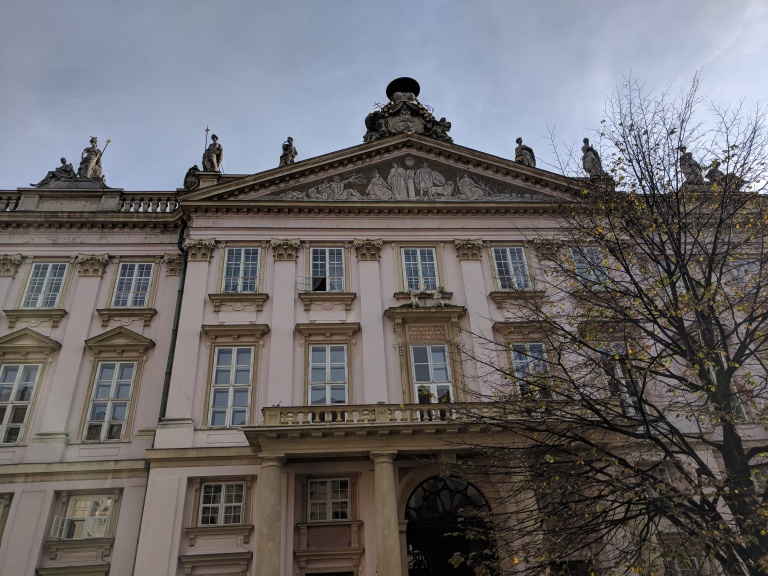 So what were we in a rush for? My mum and I had a reservation for a hot date with 100 of Slovakia’s finest wines! The National collection of wine is a wonderful place where you can try any of 100 amazing wines from 40 different wine makers. We left the boys at a bar and went to check it out!

There were a few different packages that were offered but we thought ‘in for a penny’ and went for the full 100 minutes, 100 wines. This was priced at 18.99 euros and I have to say it was insane value. 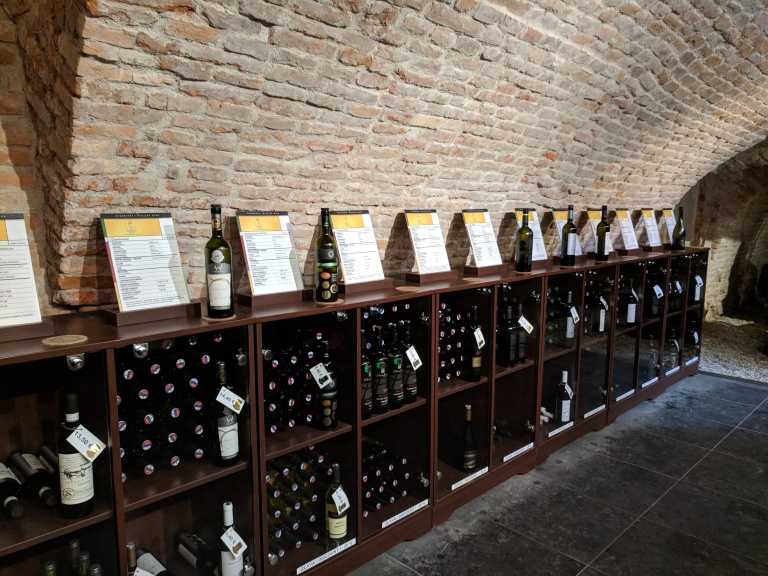 I couldn’t quite believe just how much freedom we got given, we were handed a wine glass each and totally left to our own devices. Even better than that we were the only ones there! The collection is housed in a cellar and it’s a lovely atmosphere, the man who was helping us let us know where he was and then totally left us to it. 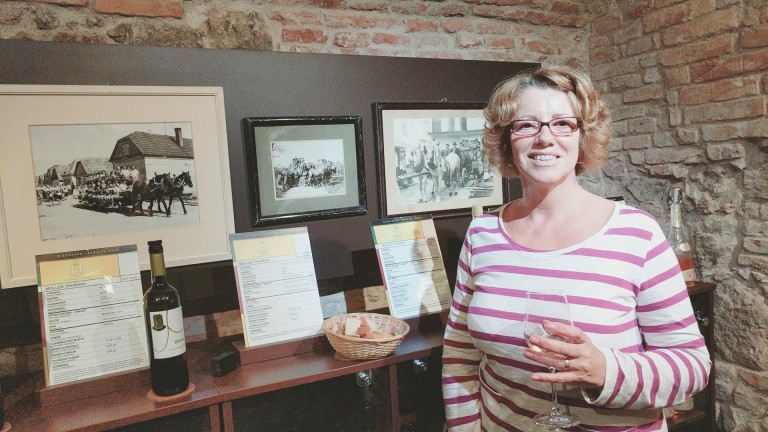 The collection was more white heavy which suited me perfectly, although my mum soon found the ‘red’ room and hid herself there for the duration. We were supplied with bread if we needed it and we ended up sampling 36, not bad considering we were pouring quite generous measures! 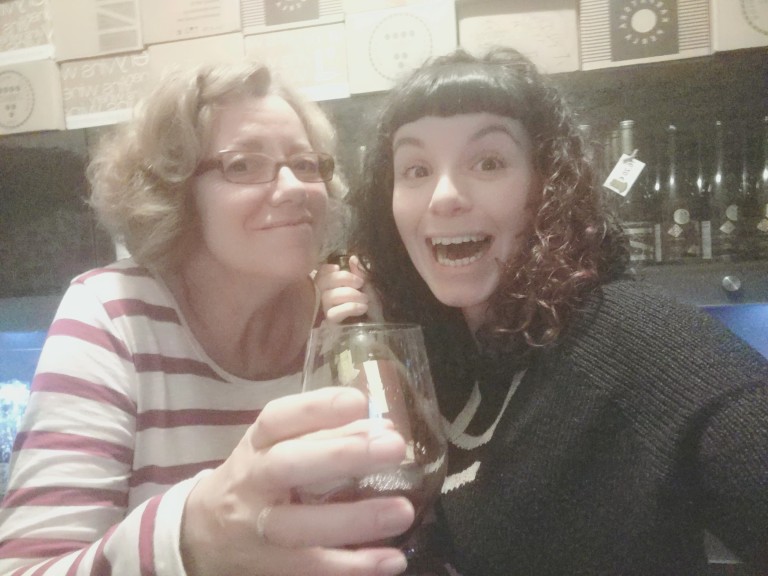 We met up with the boys and the combination of wine and fresh air sent my Mum giddy so my Dad had to take her back to the apartment whilst Adam and I went on to explore the Blue church. I’m just gonna go ahead and say this, the blue church is officially my favourite church in the whole wide world…ever. It’s the prettiest thing and I’m so glad it was also open so we got to see it’s equally adorable interior. 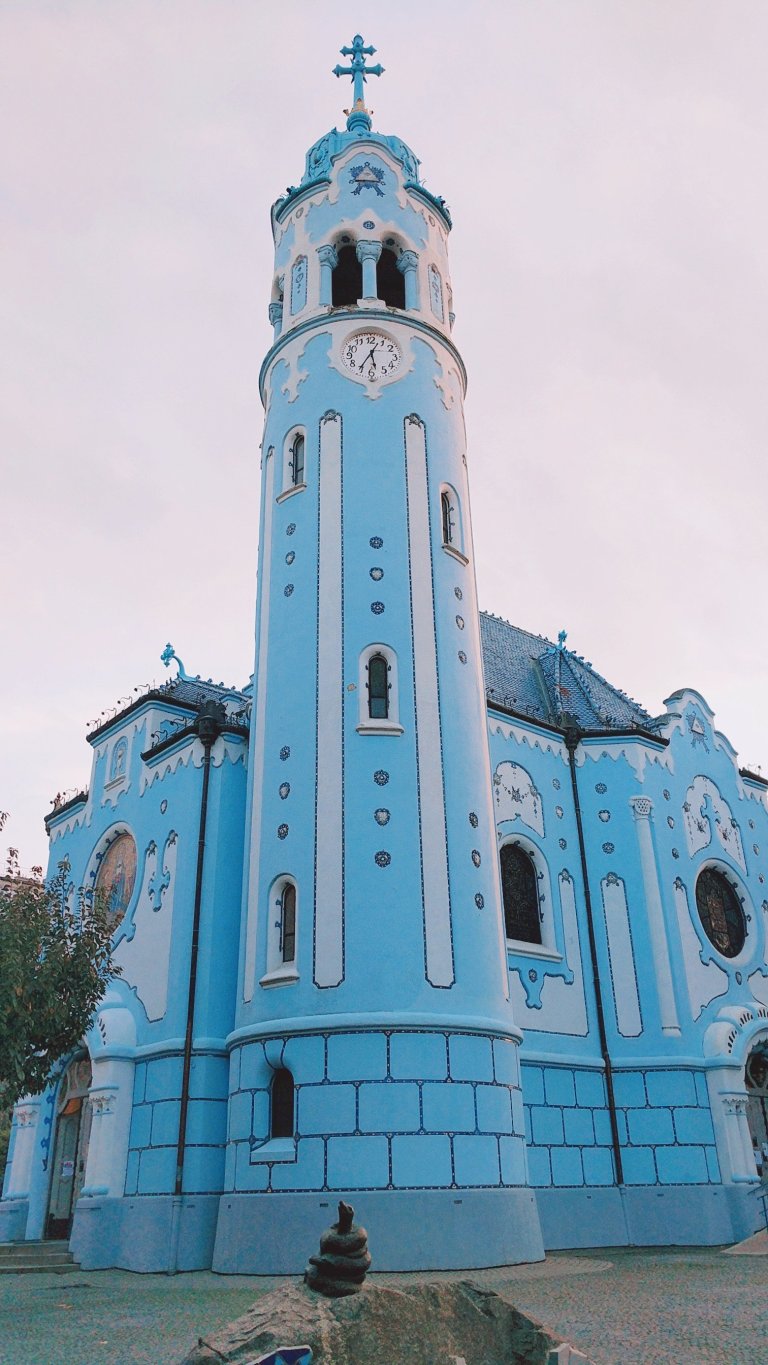 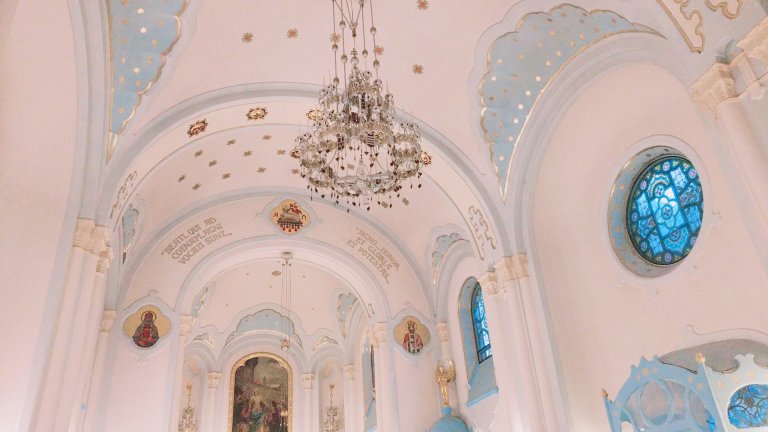 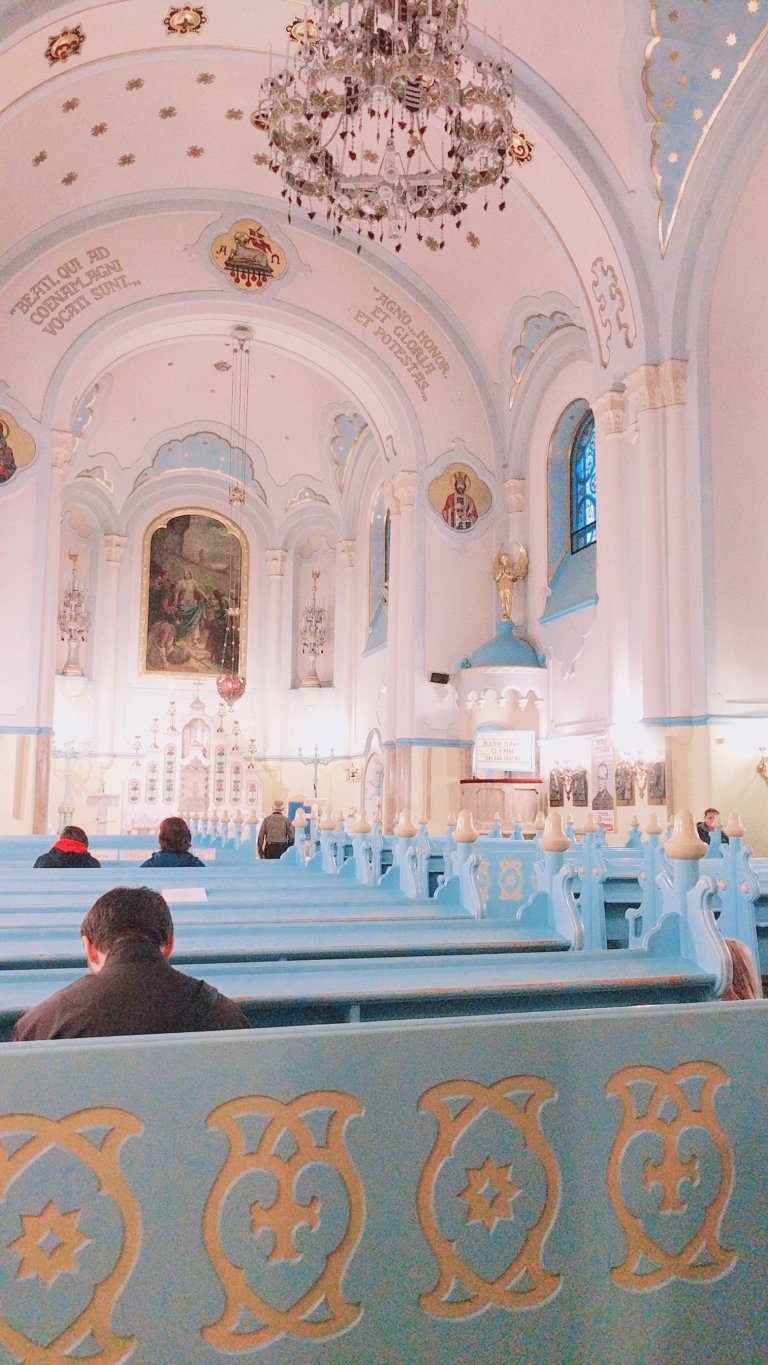 After returning to the apartment to collect my parents we headed to the Urban House for a chilled out dinner. Urban House is a pretty hipster place, it’s a huge space and has an eclectic collection of chairs and tables where you’ll find people eating, drinking or just hanging out on their laptop. 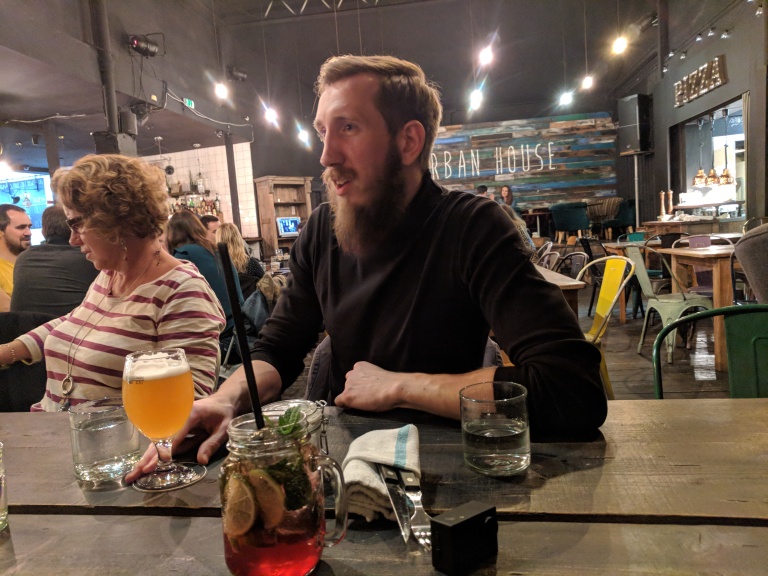 Our drinks were served in mason jars of course and we all went for a pizza option. I actually just went for some pizza sticks and dips but we were all very happy with our choices.

We then went over to Lemon Tree, a Thai restaurant and vodka bar that boasts a pretty amazing view. We’d made a reservation for 10pm, which was absolutely essential as many people were being turned away at the lift as we went up. 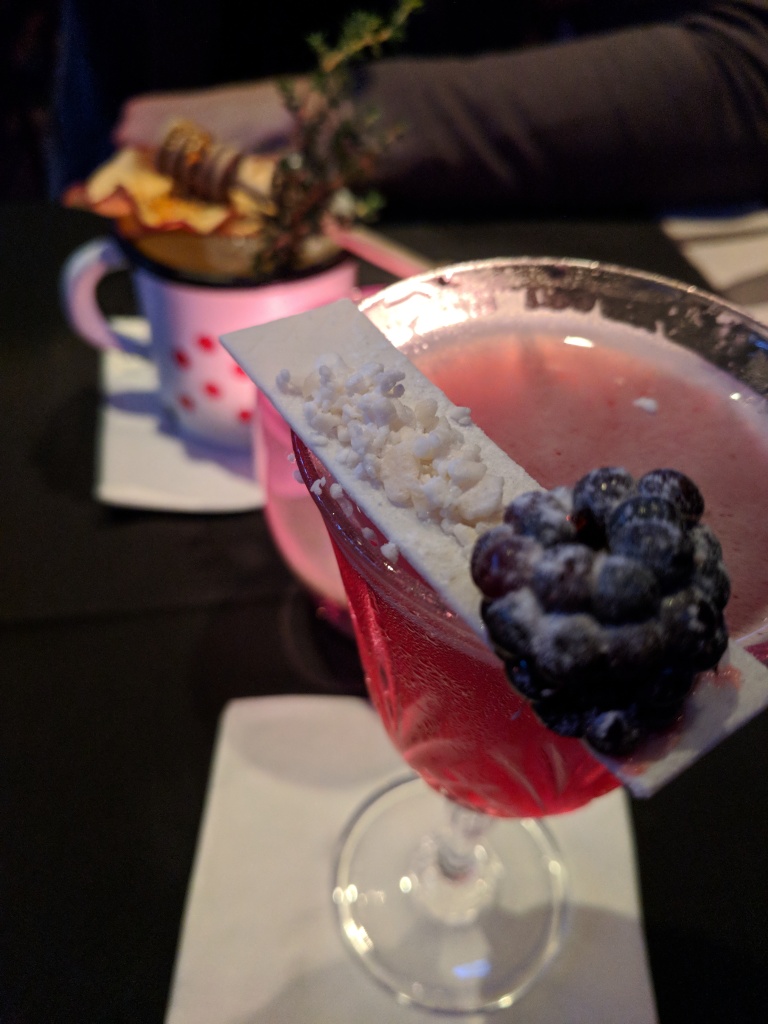 Unfortunately we got seated away from any windows and didn’t get to enjoy the view but the cocktails were absolutely divine. They’re more expensive than you’ll find in most other places in the city but I really enjoyed them.

Finally we retreated to bed, about 11pm, feeling tired after a full on day of drinking and eating! Another wonderful day in Slovakia!