Whilst doing my Cuba research it was clear that Vinales was a must see destination so I started doing resarch on the best way to travel the 115 miles required to get there. Eventually we decided a group excursion would be the way forward and booked an all day tour with Gaviota Tours. The tour was £58 each for a 12 hour day which I felt was good value.

Our day started early, being picked up from the Hotel Inglaterra at 7.30am. The coach turned up half an hour late but it was ok, we were enjoying the gorgeous morning light and chatting to a couple of newlyweds who were also waiting for the tour.

It was a beautiful drive to Vinales and soon we were at our first destination, ‘Mural de la Prehistoria’, an amazing mural on a huge scale. It’s not quite prehistoric, having only been painted in 1961 but it symbolises the theory of evolution. 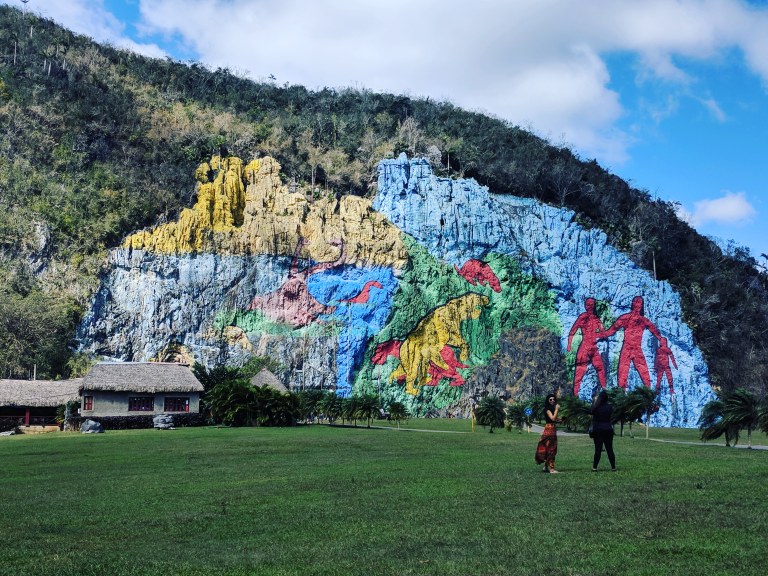 The painting was impressive and I enjoyed that you could go right up to it. There were bars and a gift shop there but we skipped them to hang out with some goats I spotted (I’m a huge goat fan!). As we were approaching the goats I spotted some cats coming out of the nearby woods however closer inspection revealed they were actually piglets! 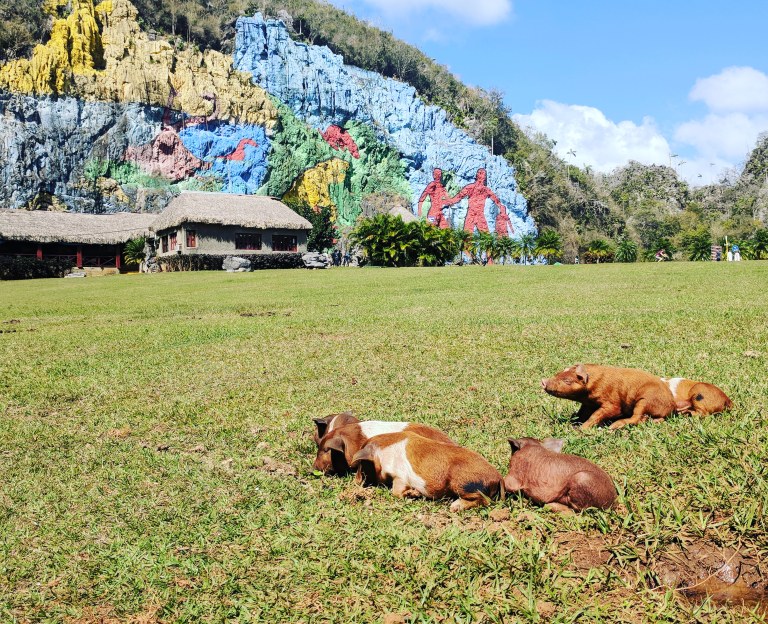 I was a bit nervous there would be some big Mumma pig following them but it was soon apparent that they were alone. I was able to get right up to them and get some gorgeous pictures and even managed a little stroke before they waddled away.

As we were stalking the pigs a man rode past on a cow with the shinest ever horns, only in Cuba! He looked pretty pleased with himself as he trotted away.

Our next stop on the trip was a visit to a tobacco farm, the very thing that Vinales is famous for. Personally I’m not a smoker and neither is Adam but when in Rome right? The farm was ran by a young Cuban who spoke amazing English and his Grandad.

We had a tour around the farm and was talked through the the process and cigar etiquette, for example you never put the cigar out, you let the cigar die by itself to show it respect. It was very interesting. 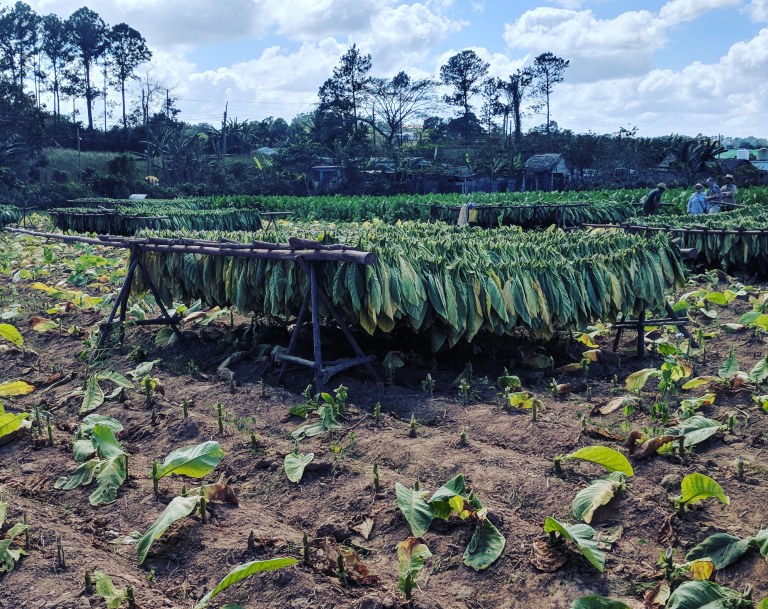 At the end of the visit we were all given cigars, it was amazing to smoke something that was so natural and chemical free and they even stripped the nicotine from the leaves before rolling them. They were selling the cigars for 4cuc each but we got 12 for 50cuc and they came in their own humidifier. 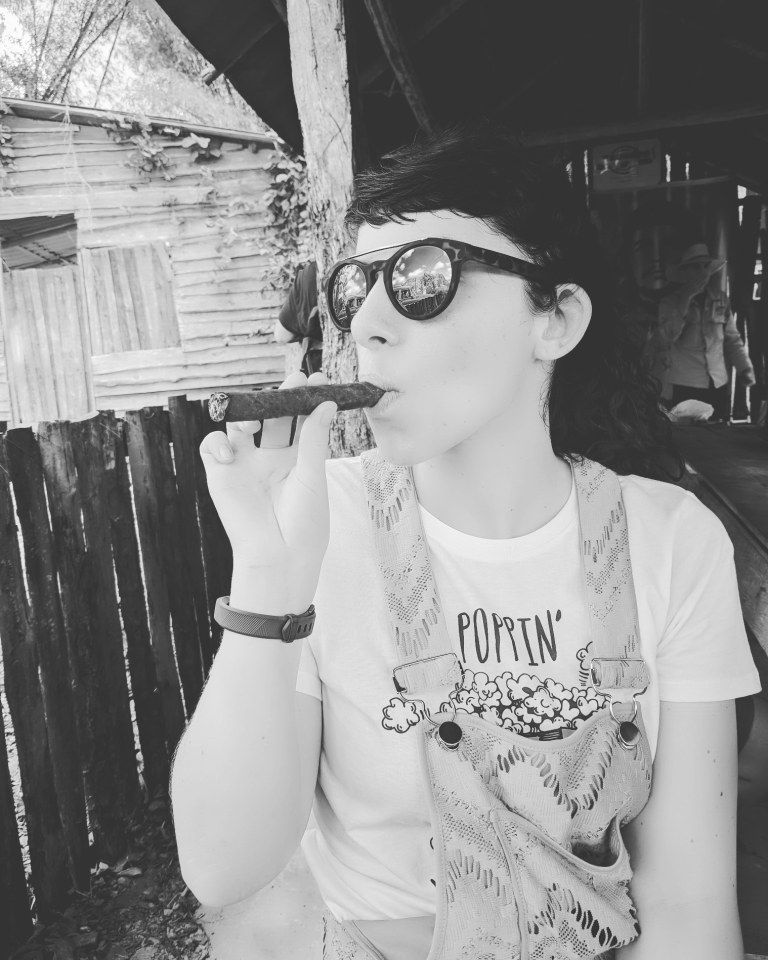 After leaving the farm it was time for lunch, which was included within the tour price as were beers. The table was laden with meat, rice, potatoes and salad and it was all really tasty, leaving us very satisfied.

Right next to the restaaurant was the Cave of the Indian, we entered a small cave which you walked through for about 5 minutes and then we queued for about 20 minutes to take a short boat ride through the cave. It was very atmospheric with some interesting rock formations.

Emerging out of the cave was so beautiful, Adam noted that it looked like we were in Jumanji. There were some little gift shops on the other side as well as a man with a cow (standard!).

As we rode the coach to our final destination of the day the sun got lower and I caught some beautiful shots from the window. Despite the long day I couldn’t sleep, Vinales is such an interesting place to watch, there is so much to see. 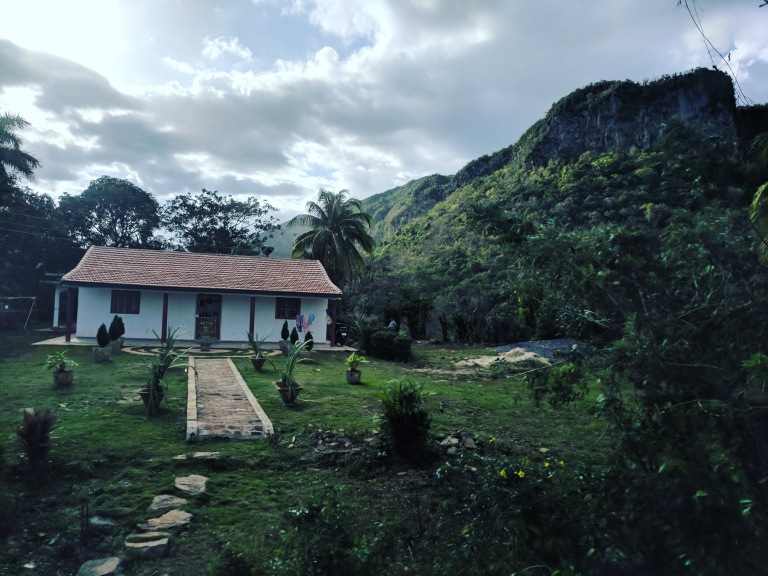 We ended the tour at the Hotel Jazmine viewpoint. The hotel itself is beautiful, it’s bright pink and has the most amazing stained glass windows! Right next to the hotel is a viewpoint where you can look right across the valley. Oh and there’s a man with a cow.

Our coach back ended being an hour late back and when we got back to central Havana, at 8.30pm we were pretty exhausted. We wanted to grab something quite quickly and ended up back at Lamparilla Tapas, where we’d had such a good meal on the first night. We ended up with a sharing platter, 2 tapas, 3 cocktails and this time went for desserts too. It was all absolutely delicious! 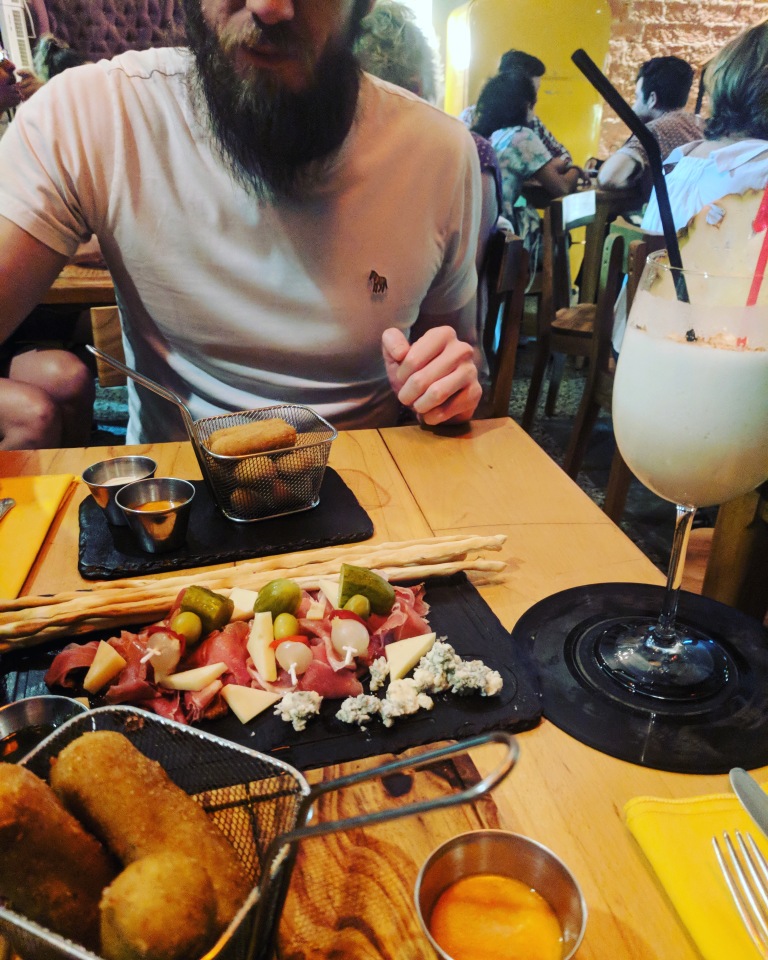