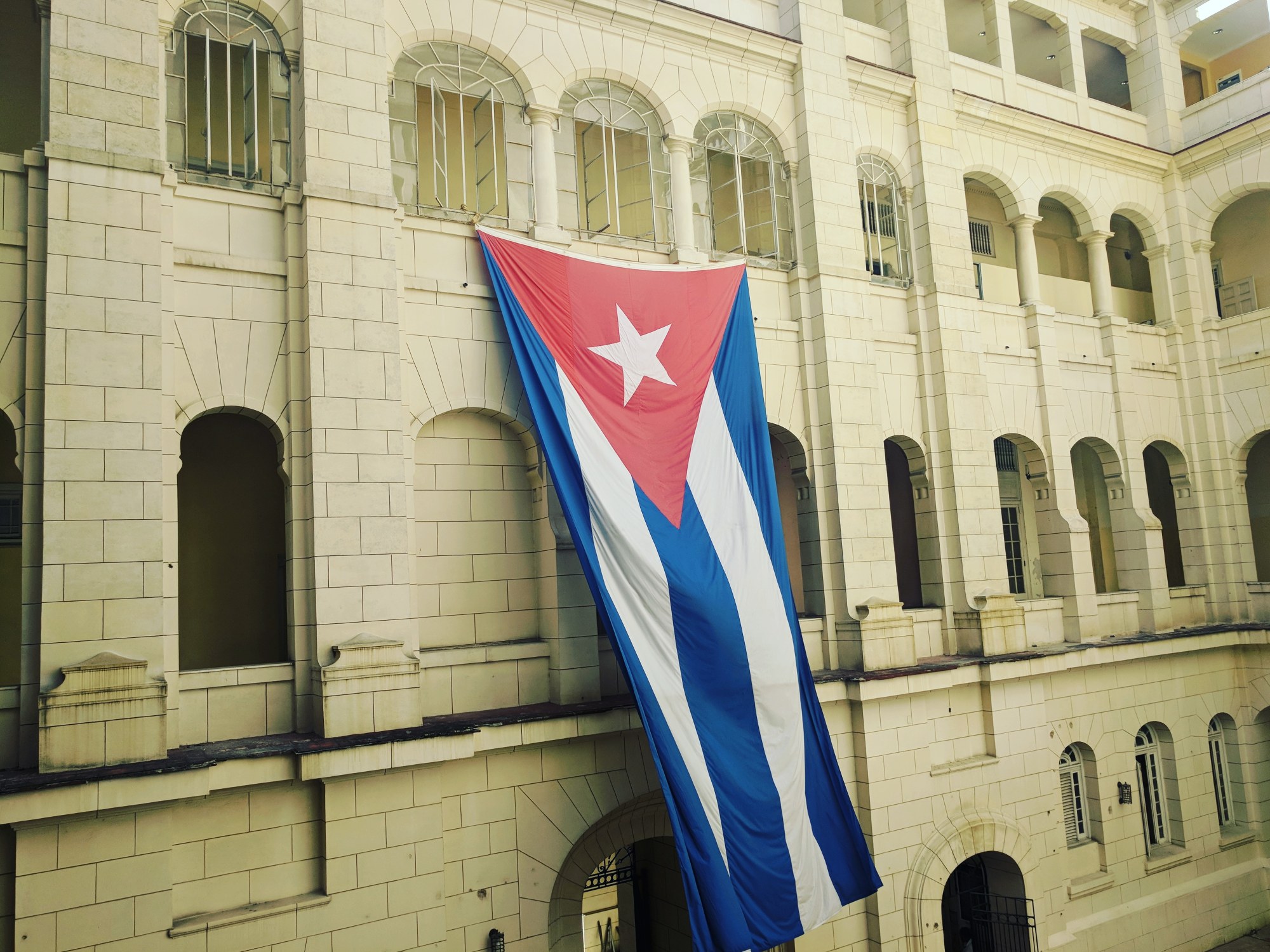 We decided to spend our morning at the Museum of the Revolution, a museum dedicated to one of the most important moments in Cuban history. On the way over we walked past the Barcardi Building, an art deco building that looks so much more beautiful in real life than I could ever capture in photos. 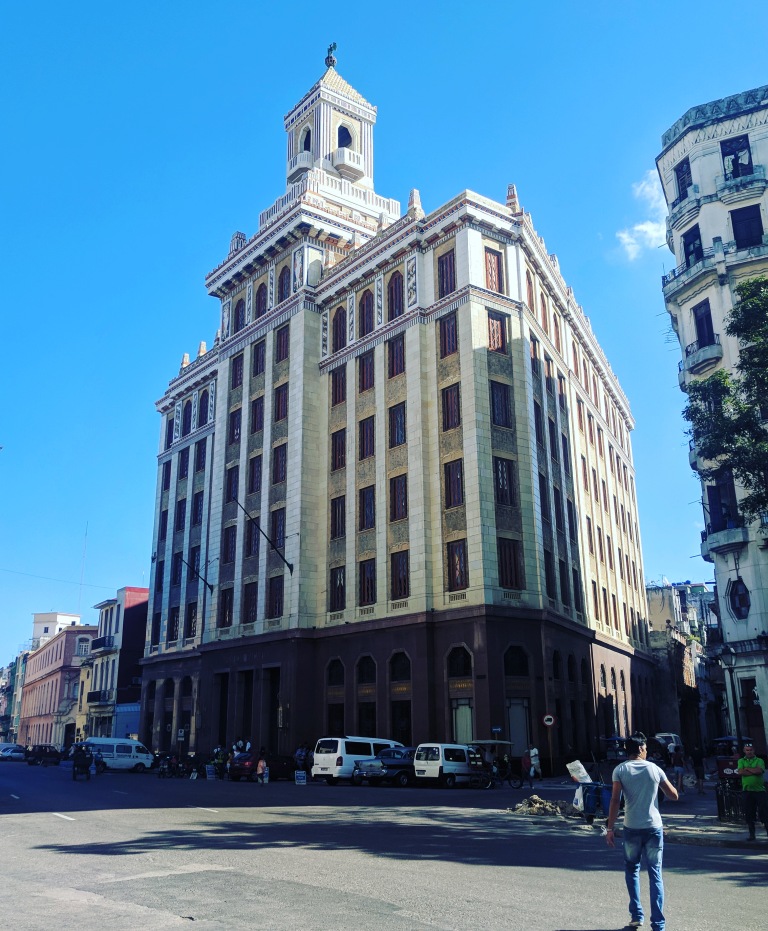 At the time of building it was the largest building in the city but after the revolution the rum company had to leave behind their headquarters after the Government confiscated their assets.

We arrived at the museum and paid our 5cuc entry. The museum is housed in the old Presidential Palace and has some beautiful neo-classical elements. It was even decorated by Tiffany’s! 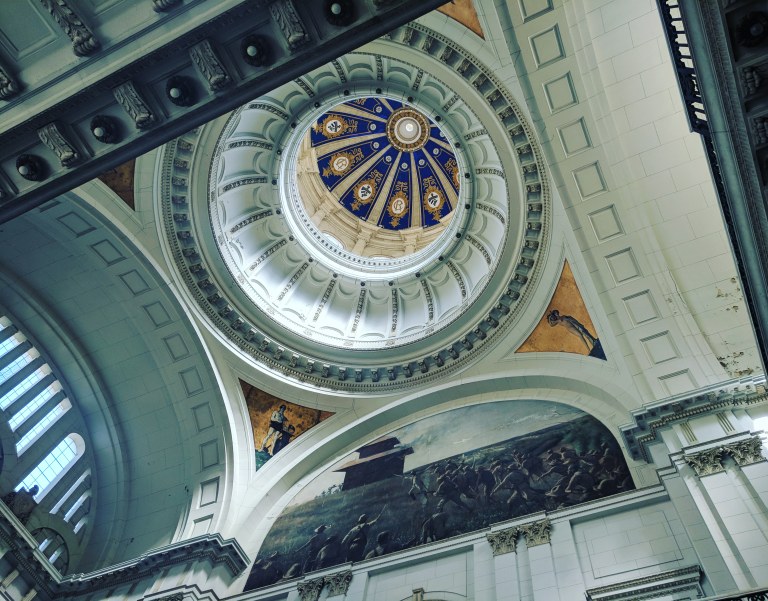 There was definitely lots to see and we spent about 2 hours making our way around. It was very interesting reading about the revolution and the timeline of events. Although we’d had to queue to get in once in the museum didn’t appear busy at all. 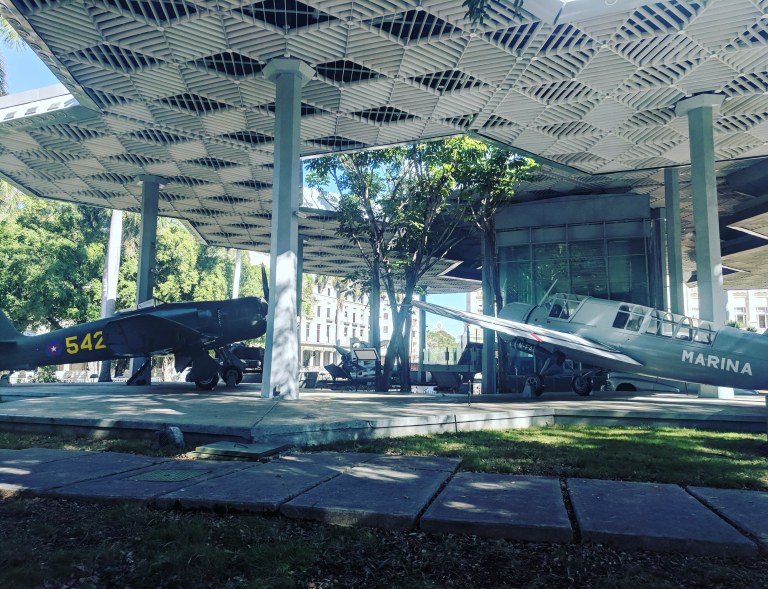 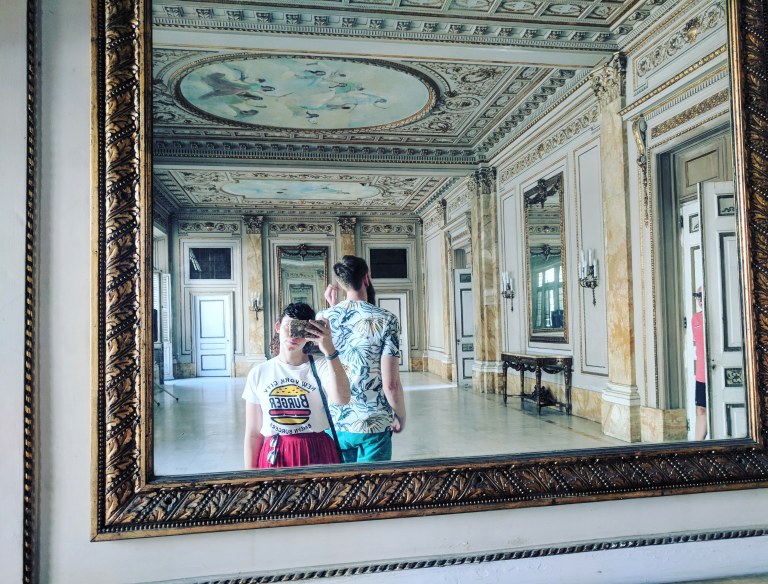 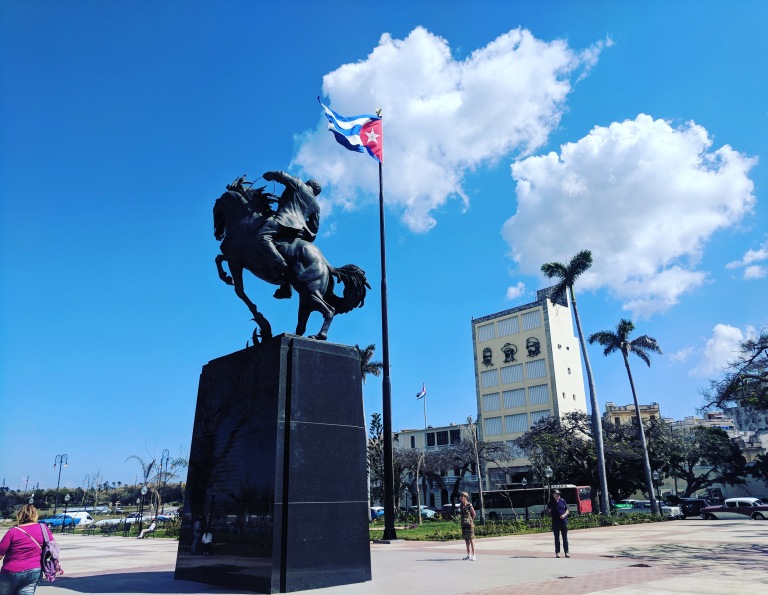 Our next stop of the day was the Palacio De La Artesania, which is one of the most beautiful shopping centres I have ever seen in my life! It’s only a small place filled with a few craft shops but certainly worth a stop just to see the building. We had hoped to get a drink but the waitress seemed unwilling to serve us which was a bit strange?! 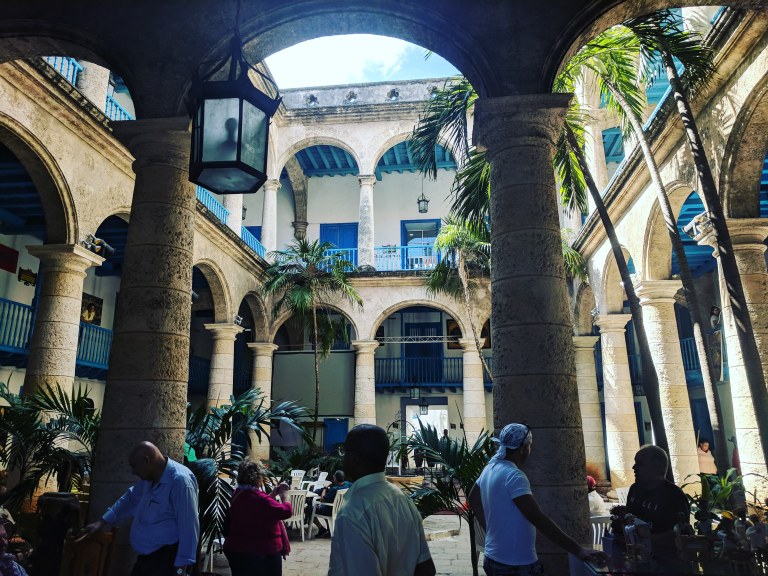 Our lunch stop was the magnificent Donde Liz restaurante. The service was amazing, our waiter was so friendly and spoke such good English and the food was beautiful. We had a sharing platter that had chicken, pork, beef, lobster, prawns and octopus and we also had a side of rice and black beans. Along with 4 (strong!) cocktails and 2 (delicious!) desserts it came to 45cuc. Great value for such a great meal. 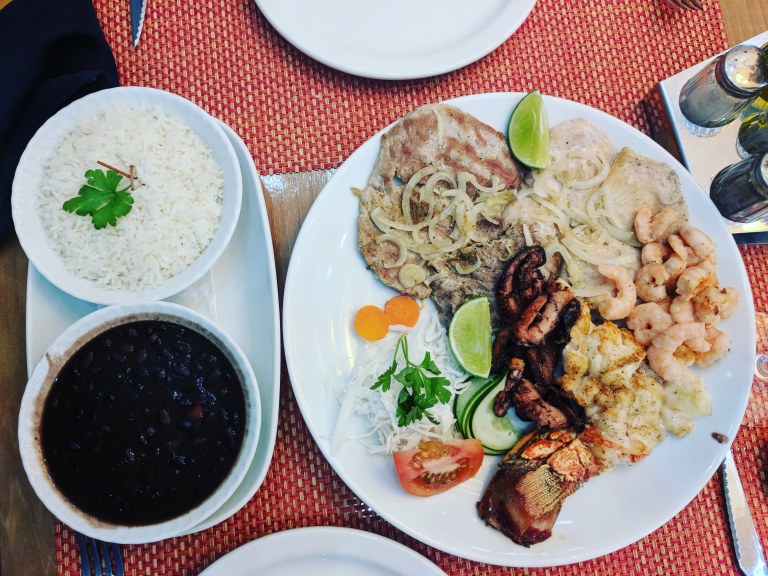 Walking your lunch off is always such an enjoyable task in Havana as alluring buildings grace every corner. One of the things I miss most about our holiday is taking those casual strolls, filling my camera memory with gorgeous pictures. 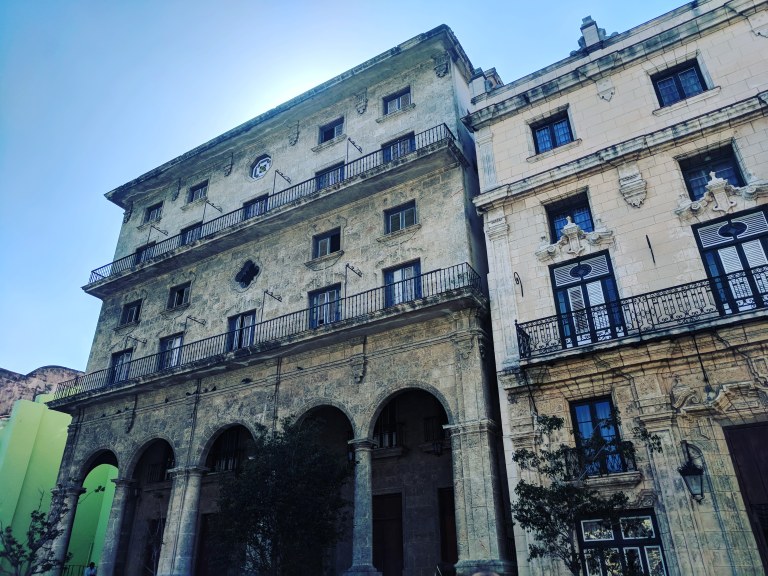 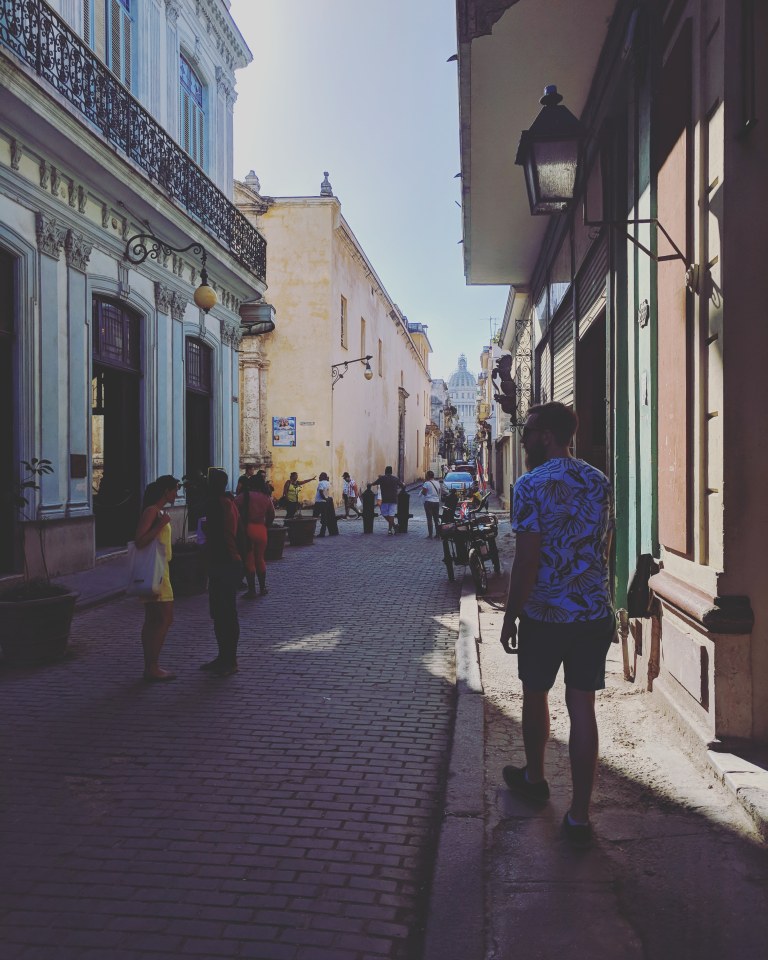 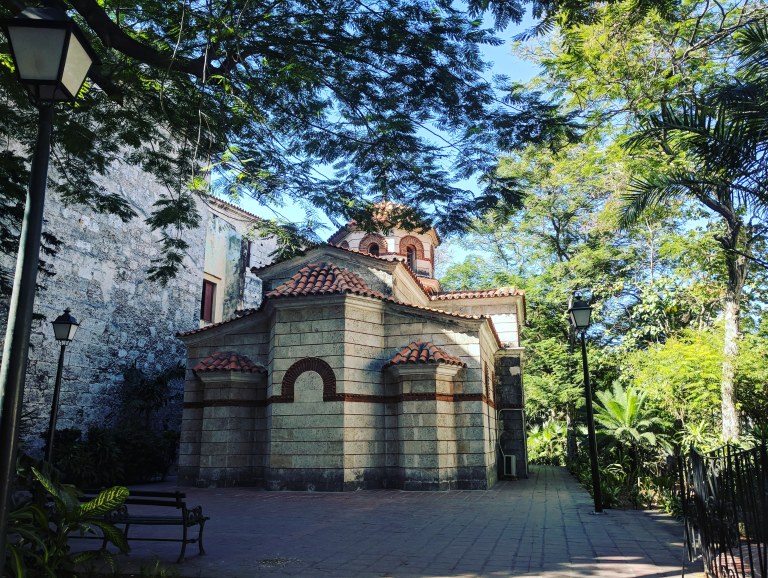 Somewhere to capture beautiful views of Havana is from the Castillo De La Fuerza, a fort considered to be one of the oldest stone forts in the America’s. It was originally built back in the 1500’s to defend against pirate attacks but was too far set back in the bay to be effective. 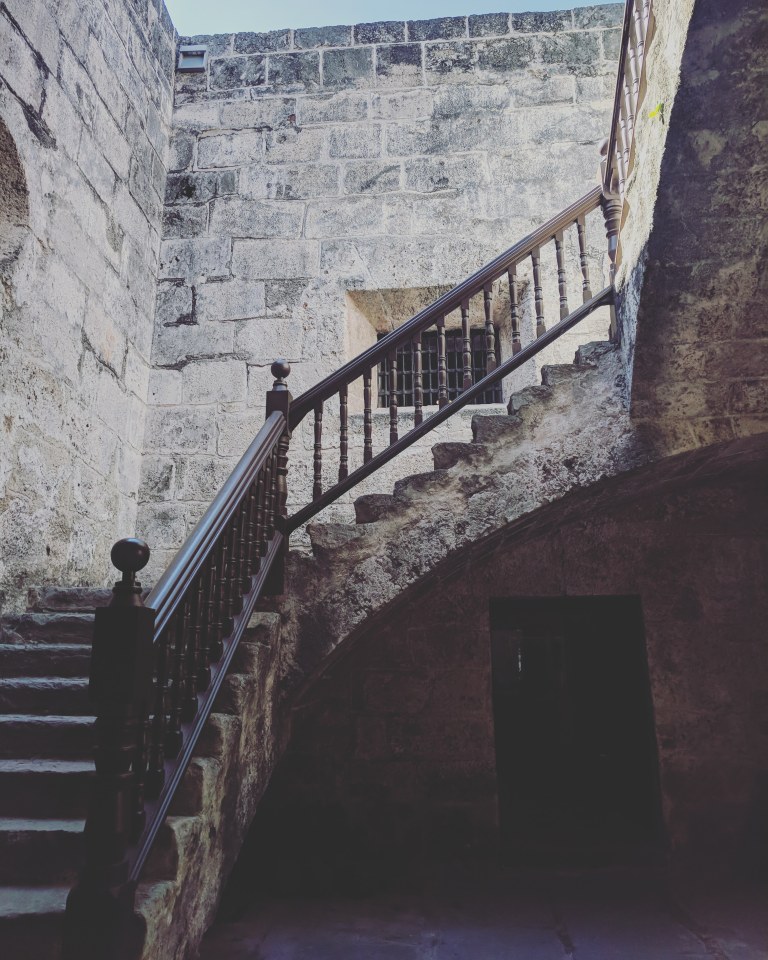 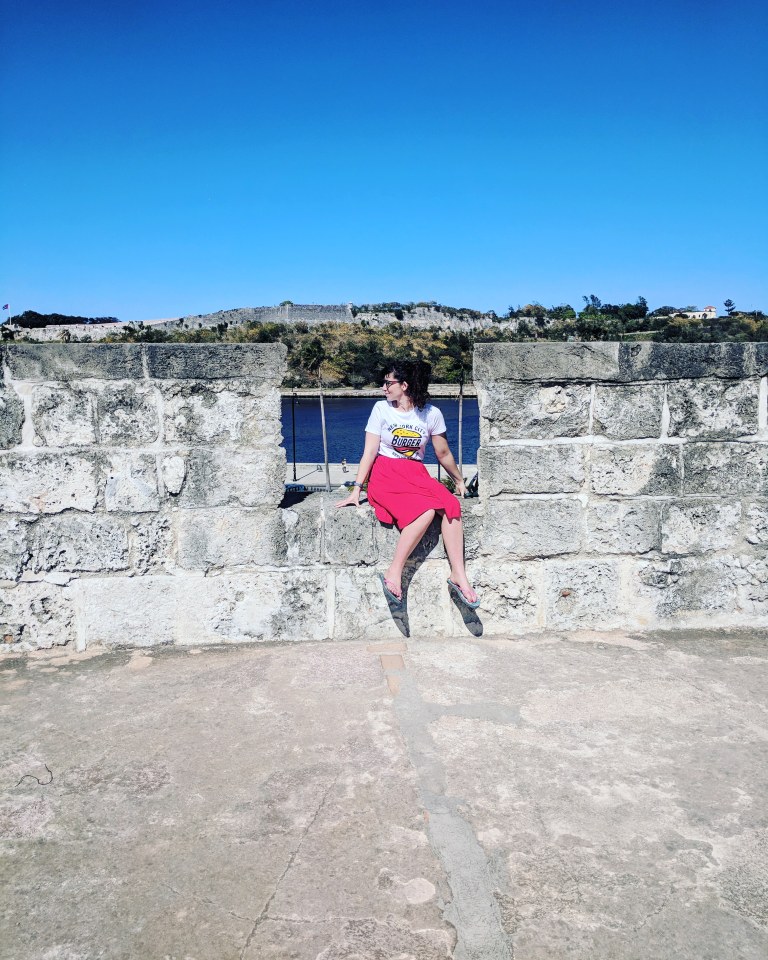 The entry is 2cuc each but it cost us a bit more than this after a woman on the staff grabbed my phone, weedled Adam and I into a photoshoot and then asked for money for herself and some other staff members. I’d been aware to look out for these kind of scams but this was the only time we fell victim to such a thing and it was only 2 dollars at the end of the day and we got some photos the two of us out of it! 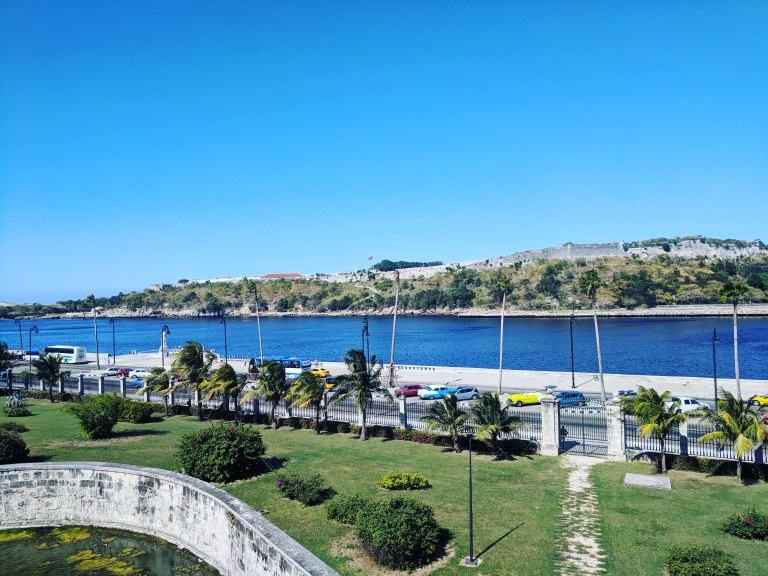 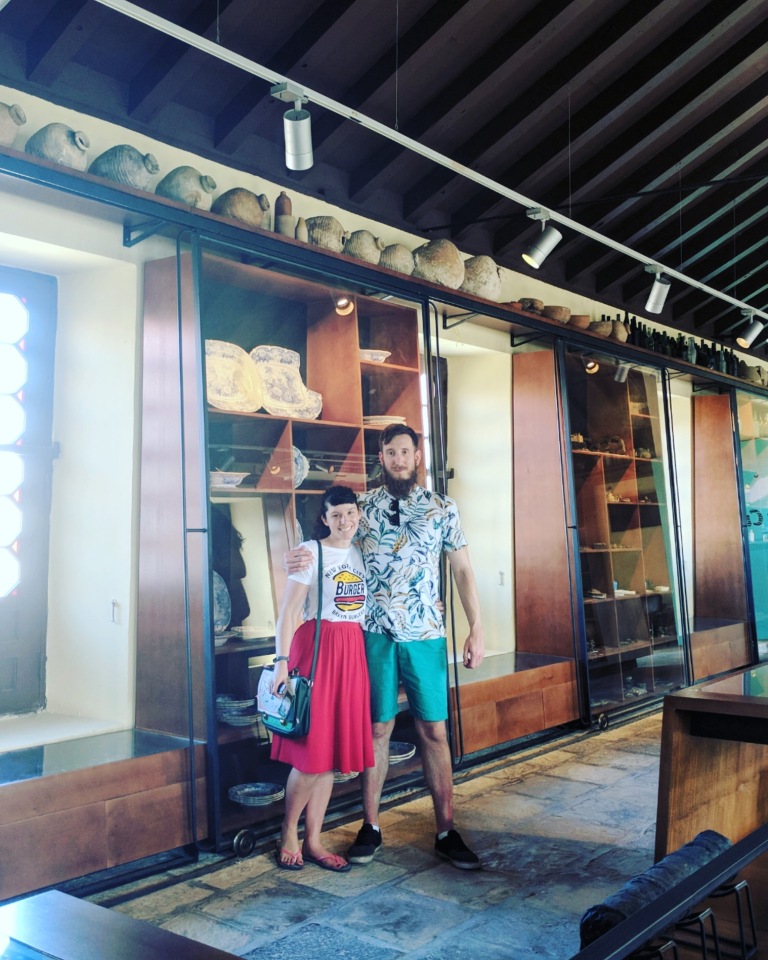 We took a walk through the San Francisco De Asis square which faced the harbour and came around in the 16th century when galleons would stop by on their way to Spain. It may be small but it’s so worth a visit. 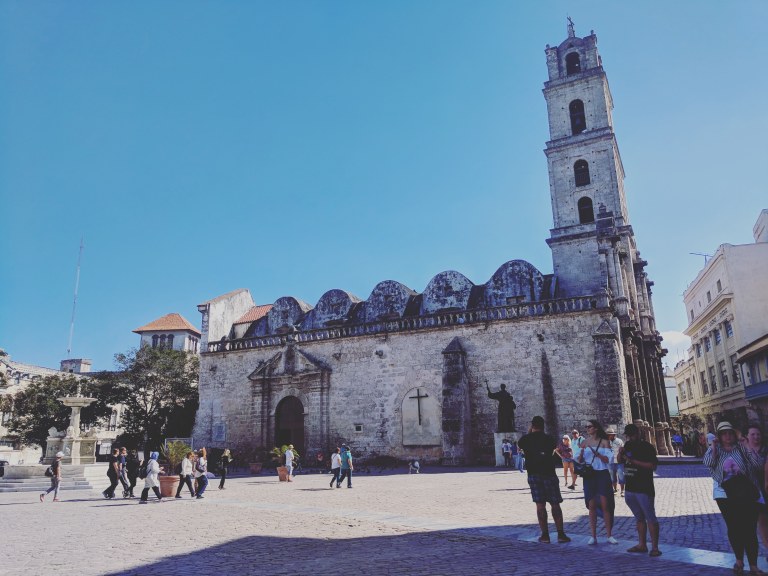 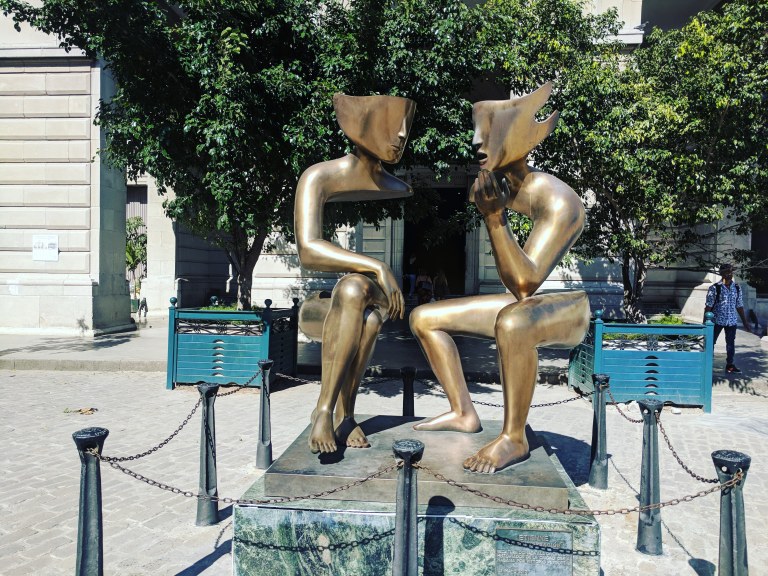 The square also houses the Basilica, used by the English in the year they ruled Cuba. When it was returned to the Spanish they didn’t use it as a church and instead used it as a concert venue. 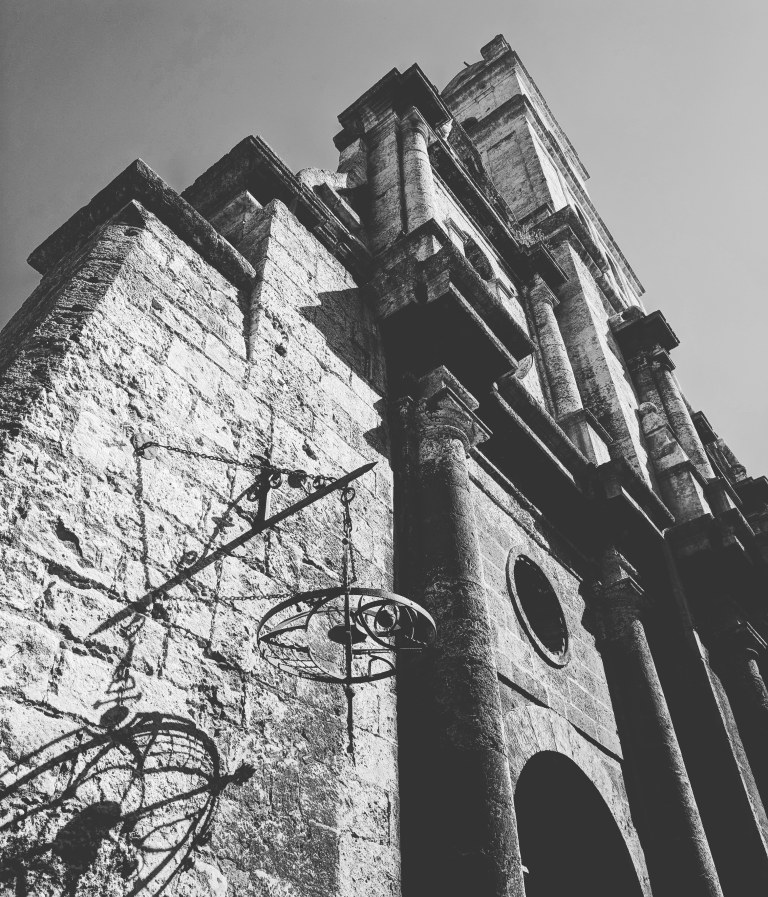 Another beautiful square was Plaza De Armas, the oldest in the city. Once named after the mayor it was renamed to the Square of Arms as it was used to conduct military exercises. 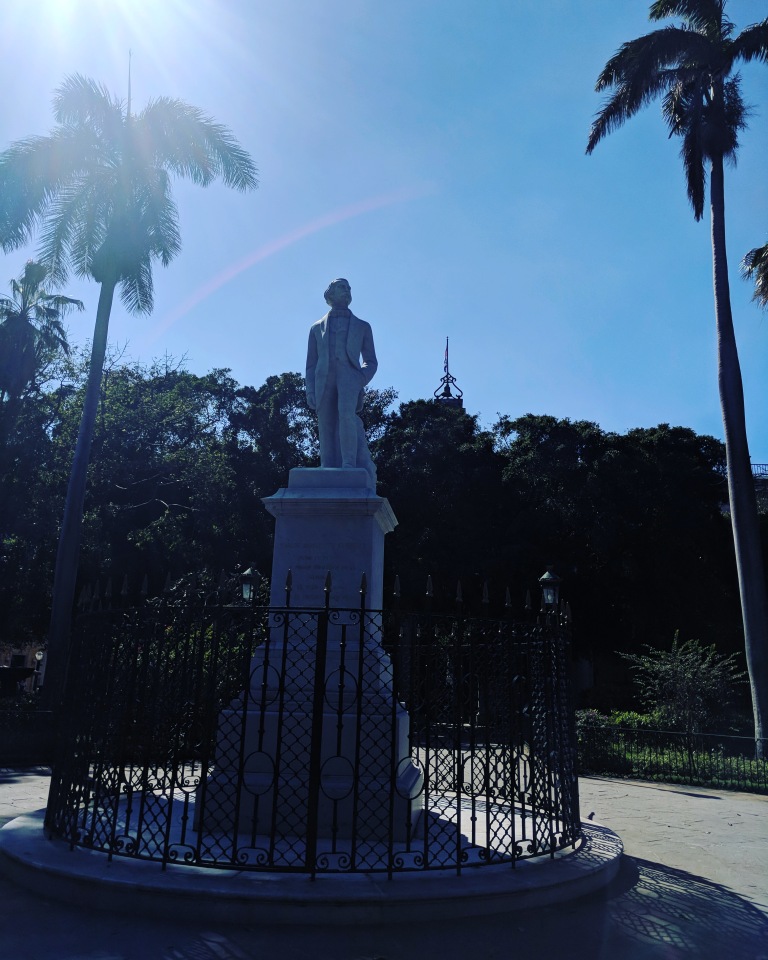 It was the day of squares as we also visited Plaza Vieja. The square was surrounded by typically Cuban buildings, in their gorgeous pastel colours. 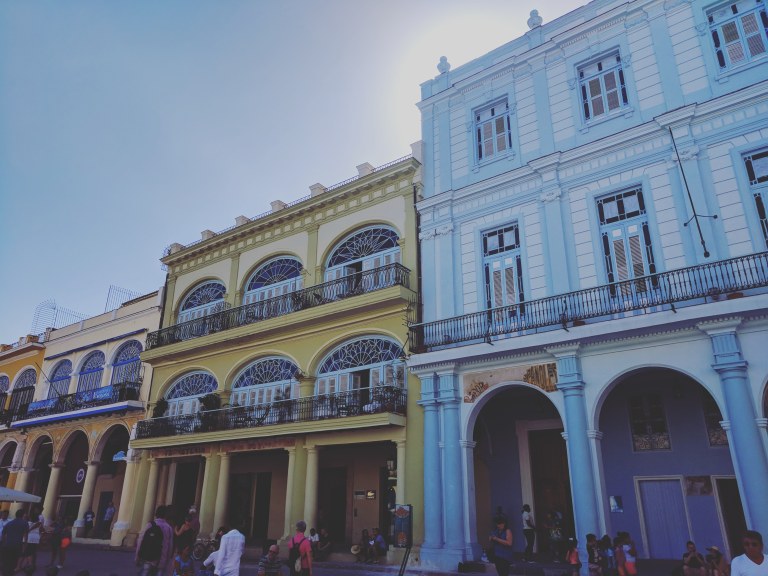 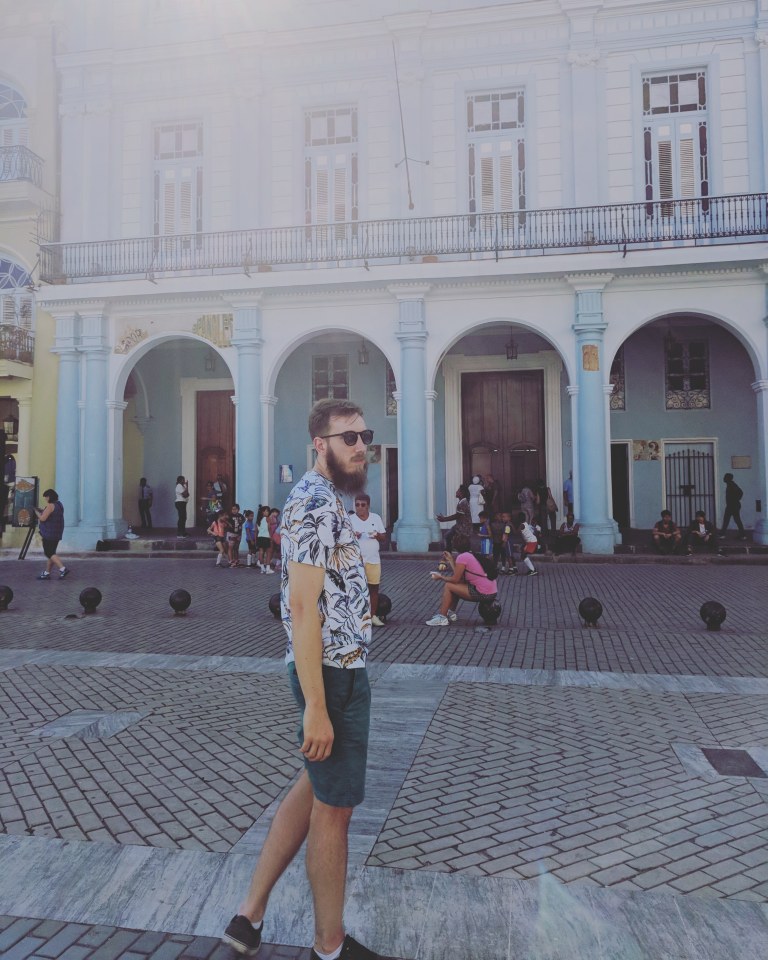 Feeling quite thirsty after visiting all those squares we popped into Dos Hermanos, one of the most famous and oldest bars in the city. Whilst clientele once included Errol Flynn and Marlon Brando since then the bar seems to have got a bit rundown. 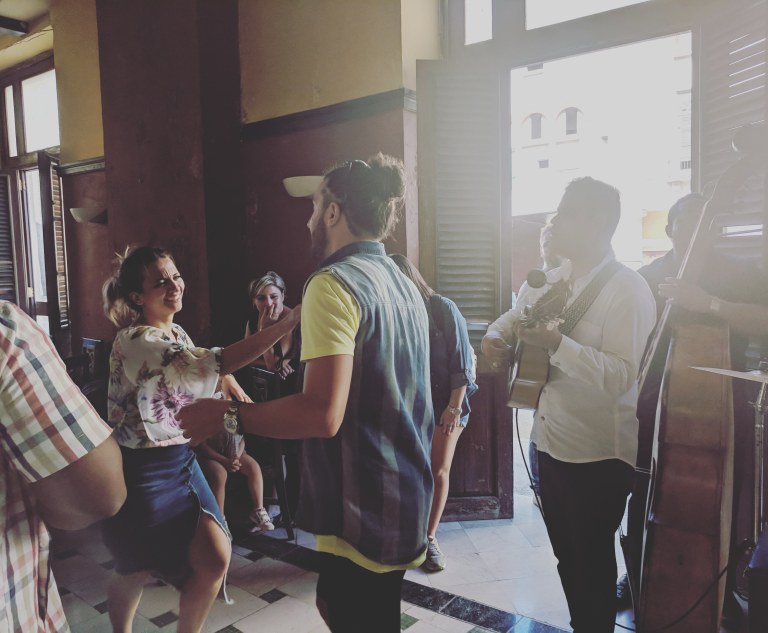 We just stuck around for a beer each, 2 beers cost us 5cuc, and listened to the lively salsa music that we’d been lucky enough to happen upon.

After a rest back at our AirBnB we turned up at our dinner reservation, at the Elizalde Bar. I had fish with prawns whilst Adam had pasta. The service was quick and our meal was yummy with some lovely presentation. Our meal along with 2 cocktails and a soft drink cost 42cuc. 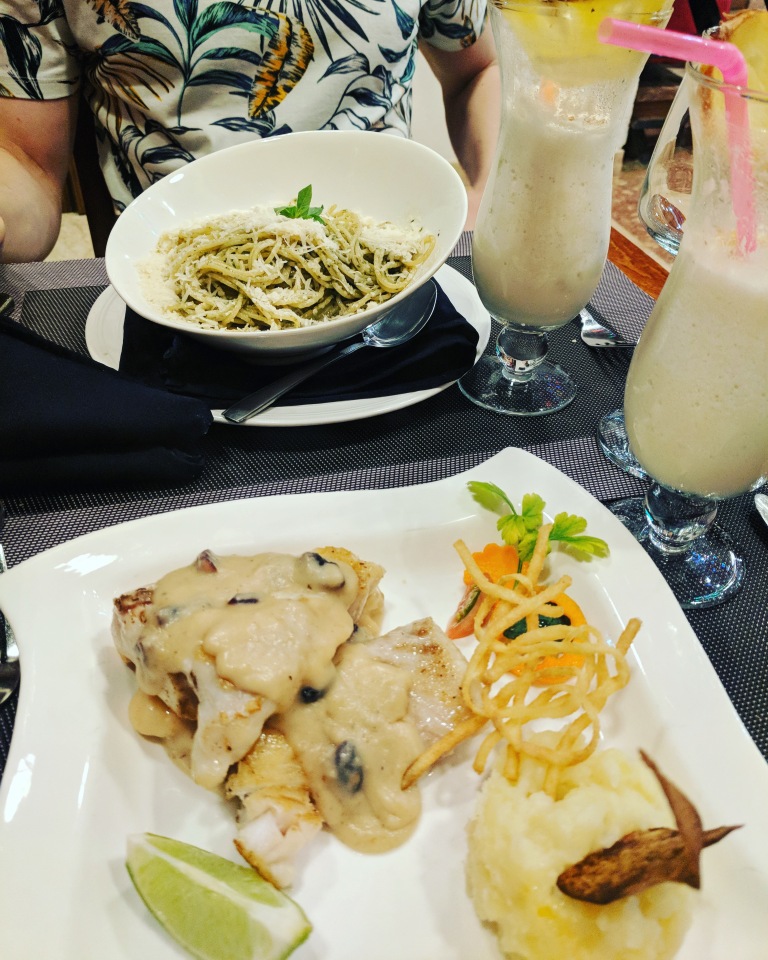