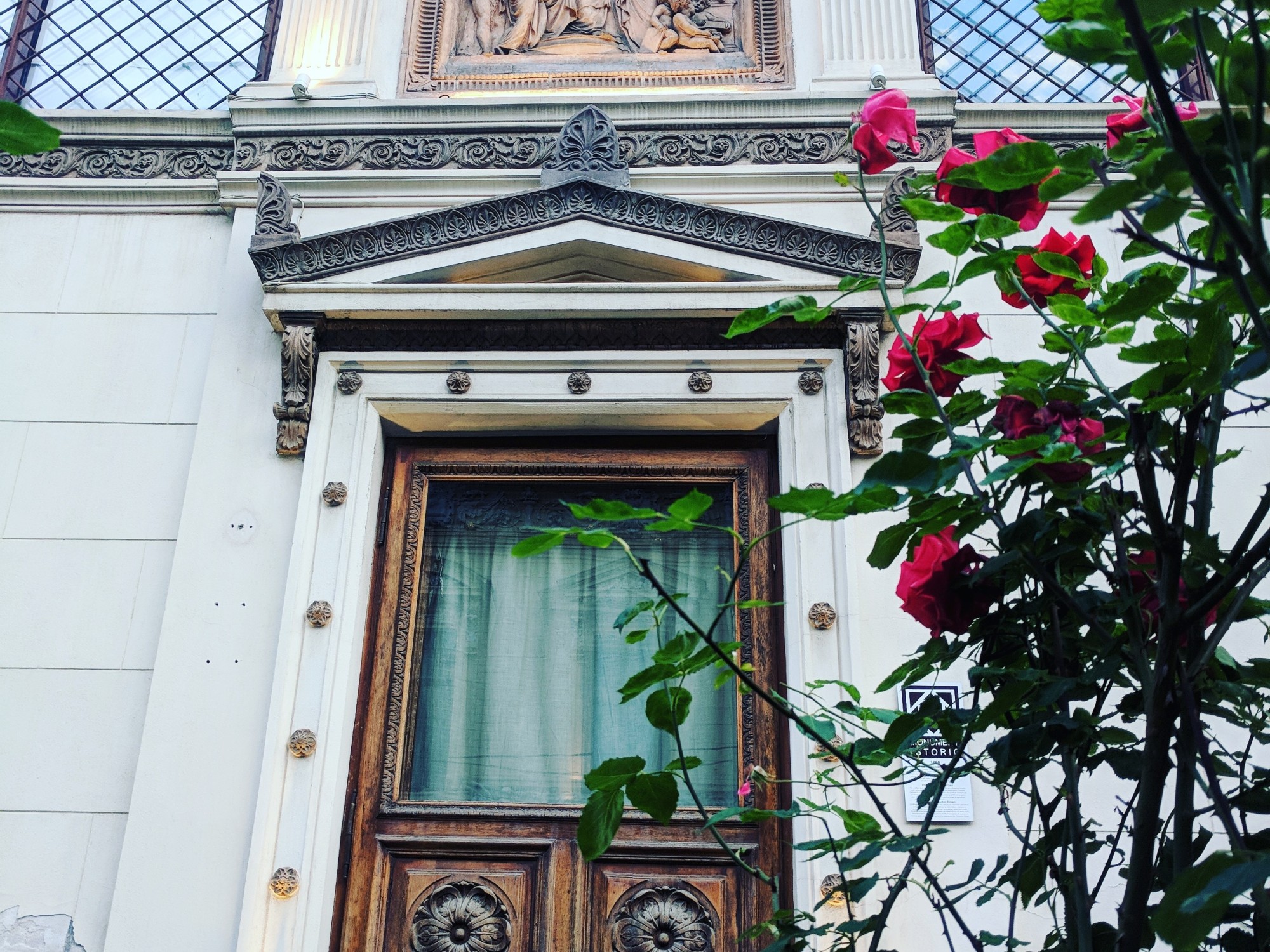 After making my friend Rachel eat humble pie on her whole ‘I don’t visit Eastern Europe’ stance last year with our amazing trip to Latvia I decided to book us a trip to Romania after seeing some flights from Luton (our nearest airport) with Ryanair for around £40 return. I thought it would be a cheap and cheerful little holiday and as we were visiting in June a sunny break too!

We flew out from England, arriving in Bucharest around 4pm. Getting to the centre from the airport was relatively easy. The line 783 bus can be caught from right outside and it will take you straight into town. You buy the bus tickets before boarding for a very affordable 8 lei. Unfortunately I was not paying much attention on the bus and we missed our stop and the next one wasn’t for another mile so it added a longer walk to our journey!

We checked into Cloud 9 living, a small but funky hostel located very centrally. We were checked in by a very friendly guy who gave us a complete run down of the area and showed us to our private twin room with private bathroom. We paid just £26 a night for the room, which was great value.

We’d made a reservation at Excalibur, a medieval themed restaurant, which superseded just novelty value. We ordered a meat platter, supposedly for 2, but despite our hunger we ended up leaving quite a lot! It was a fun experience to just tuck in with our hands and thankfully there was a small bowl of lemon water on the table to wash ourselves afterwards. 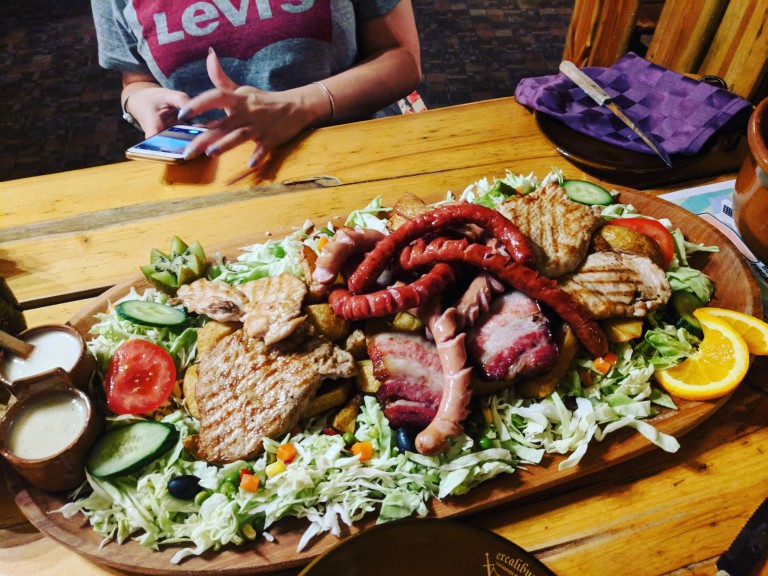 We washed it all down with a 1L carafe of wine and the meal came to 104 lei (approx £20) which was amazing value for a meal that could have easily fed 4. 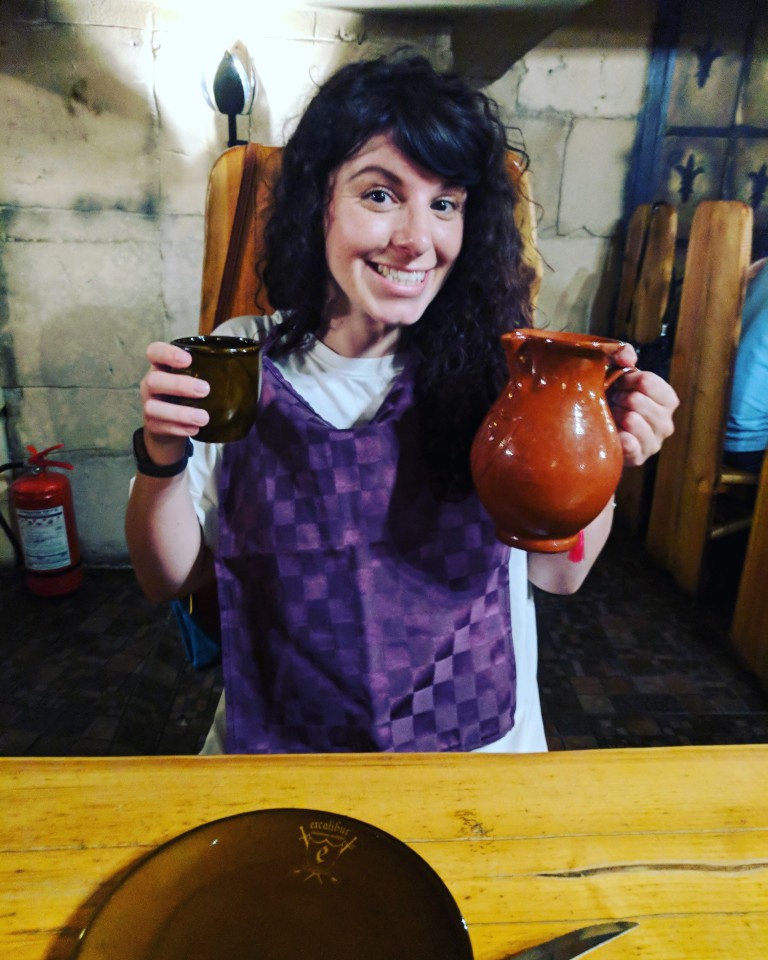 Despite it being very hot and humid we were eager to explore our new surroundings and so went for a stroll. Outside the restaurant was Revolution Square, named after the 1989 Romanian Revolution, where Communism was overthrown. 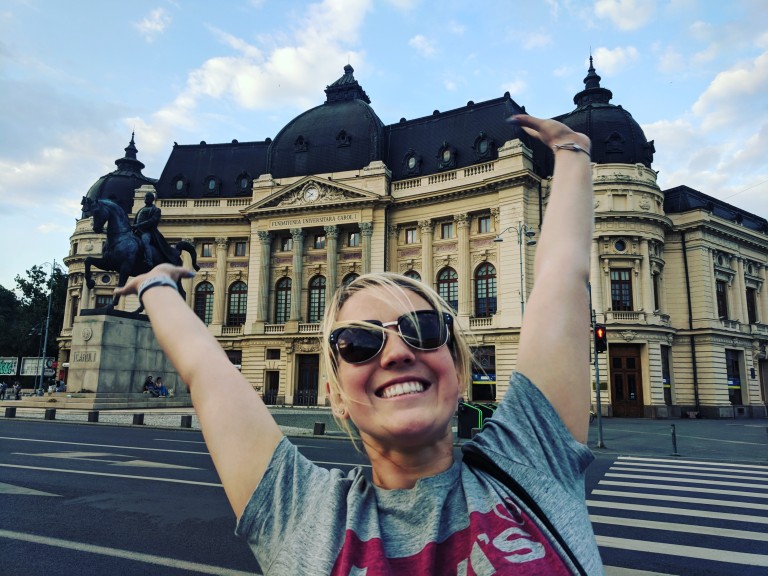 Within the square sits the Memorial of the Rebirth, to commemorate the victims of the Revolution. The abstract design of the Memorial attracted controversy and a series of vandalisms followed its opening. In 2012, 7 years after its opening, it was splashed with red paint and the paint still sits there today, giving the monument the appearance of bleeding. 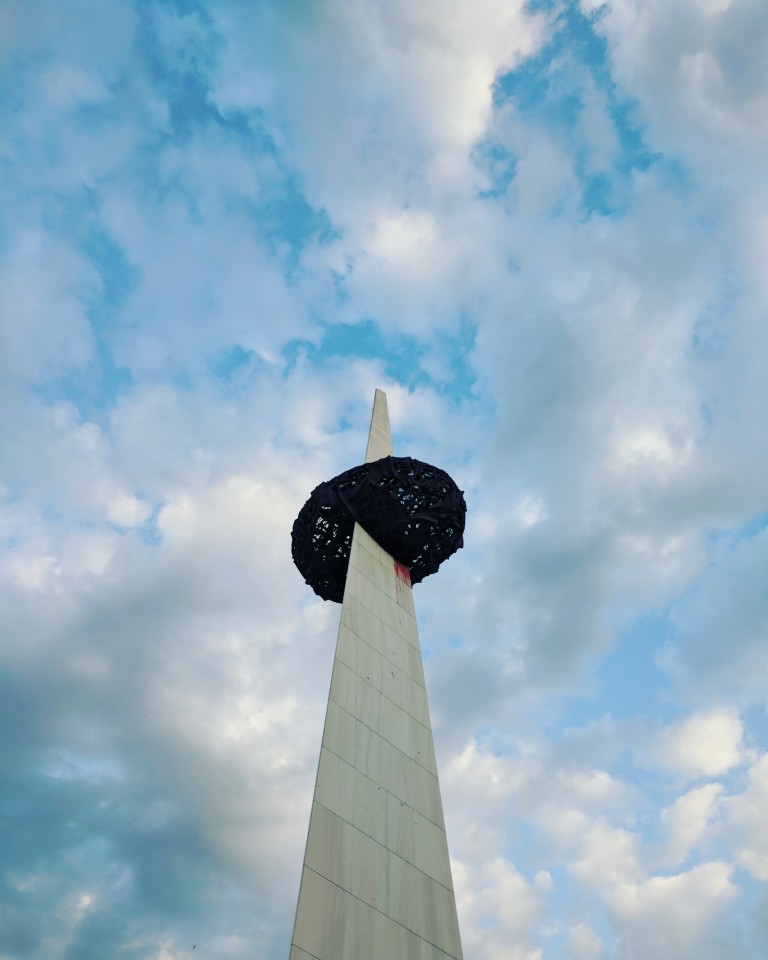 Bucharest is often slated for not being the most picturesque of places and whilst it can lack that charm that you find elsewhere there was a lot of interesting and beautiful architecture around. 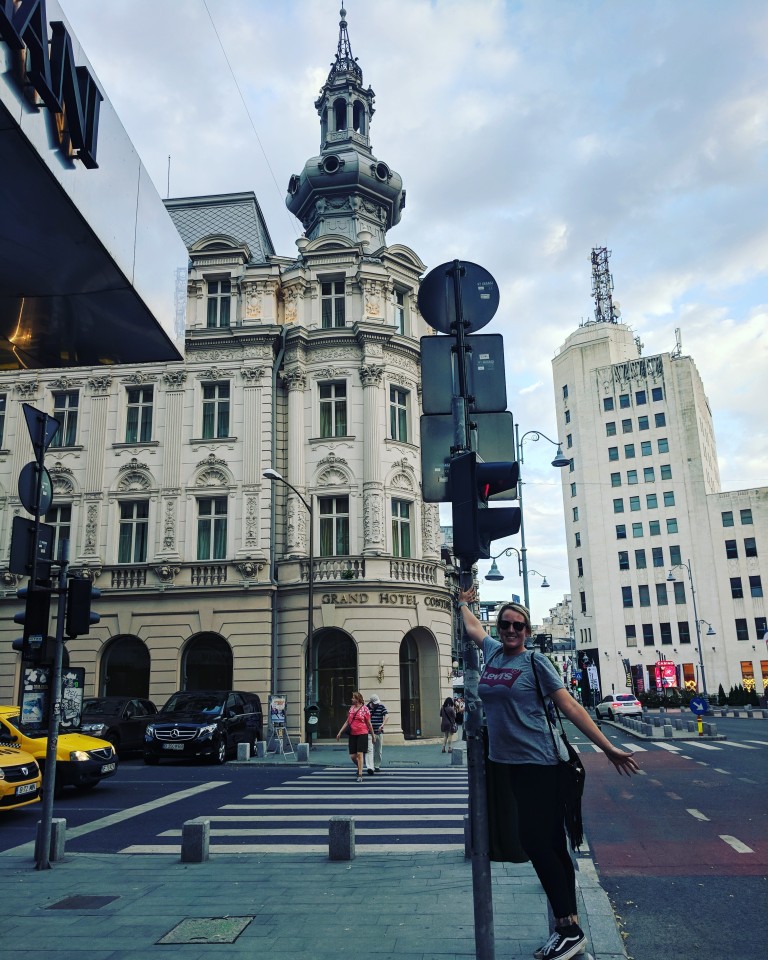 Examples of this could be found around Revolution Square, where the Royal Palace and the Central University Library sit. Calea Victoriei, the oldest boulevard in Bucharest, is a great place to walk for beautiful architecture. 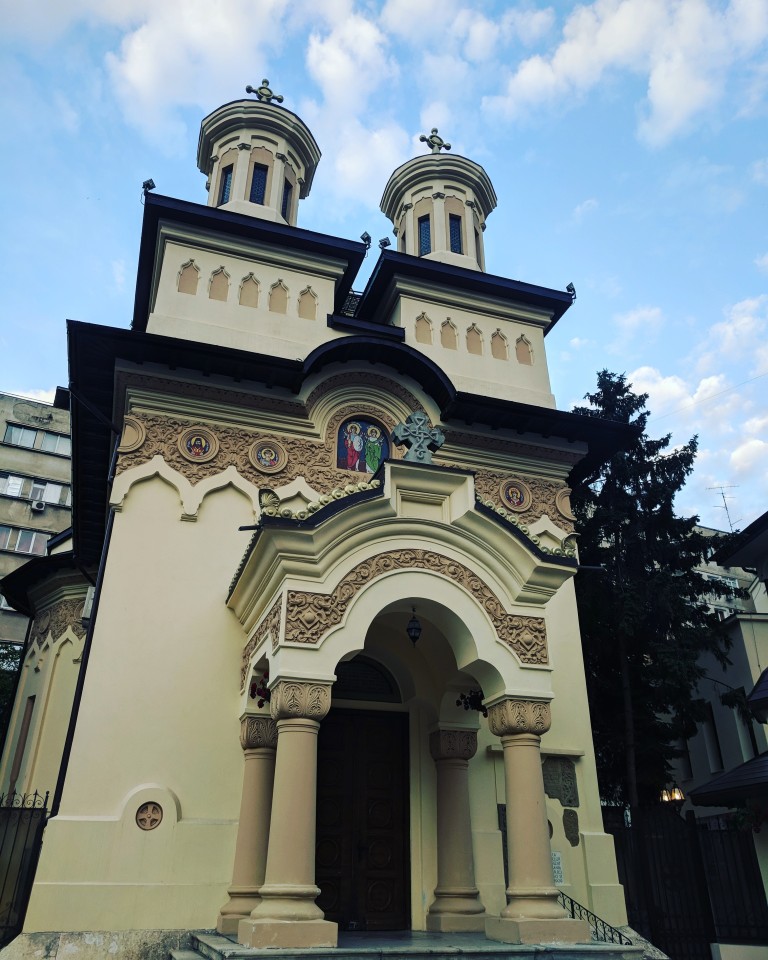 Something still quite new to me is the Orthodox churches and Bucharest had its share. The Kretzulescu church can also be found on Calea Victoriei and dates back to the early 1700’s. It wasn’t open but I still enjoyed the exterior. Biscera Boteanu was another church we happened across, with a grand arched entrance and decorated with interesting carvings. 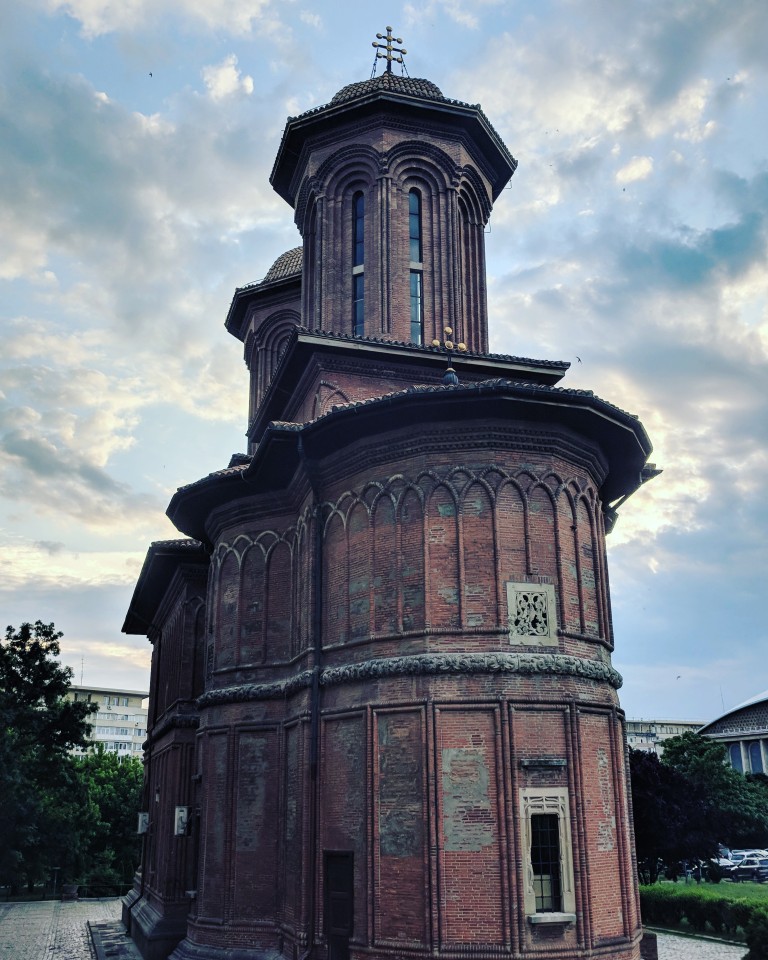 We ended our first night in Bucharest with an escape room, the Madhouse Room at The Void escape rooms. I obviously wouldn’t want to give any spoilers away but it was really fun, with creative puzzles and the first escape room I’ve ever come across without padlocks! We escaped with just seconds to go, not bad since we’d had a litre of wine with dinner! We paid 30 lei each, although they have since increased their costs. 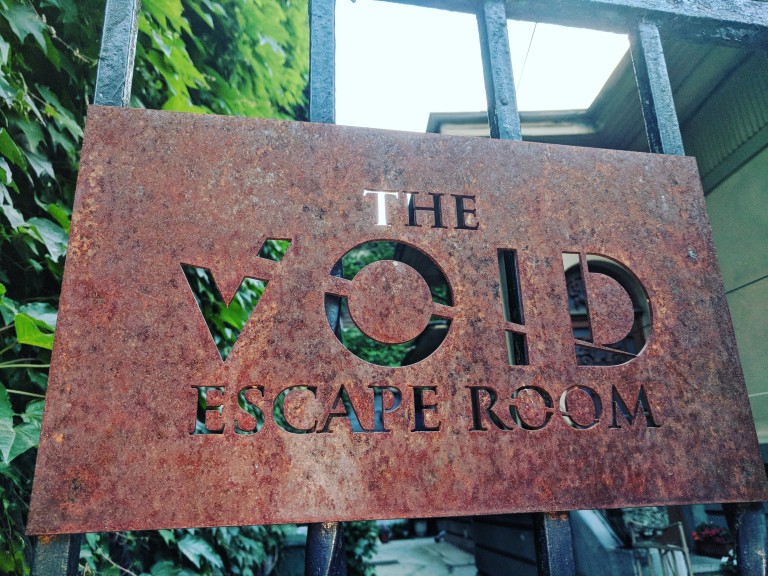 Our first evening in Bucharest and I was feeling confident that we’d chosen the right destination!