The original plan had been to get up, hire a car and drive out to Lake Sfanta Ana, the only crater lake in Romania, but we ended up chickening out of that idea. My parents had never been a fan of the idea of us hiring a car, after a bump in Spain had left them with a whole heap of unexpected fees, and neither Rachel or I had driven a car abroad before. It only took a quick Google of Romanian traffic statistics to cancel our hire booking and start planning a new itinerary!

We decided to head to Parc Aventura, an outside adventure park, about a 15 minute drive from the centre of Brasov. Thankfully Brasov has Uber and it cost less than a couple of quid to get over there.

The park costs 50 RON (about £9) to enter and for that you get 3 hours there, which we found was a perfect amount of time. There are 11 routes (not including the ones exclusively for children) of varying difficulty, which twist and turn around the forest setting.

It was such a fun, sometimes scary, way to spend our afternoon. The park was pretty quiet, we didn’t have to once wait to join a course and aside from spotting the odd person through the trees we never came across anyone else.

We ended our visit with ziplining over the lake, which was the scariest thing of all, mostly because I was paranoid my hair might get caught in the zipwire! The park had a cafe and seating area so we could get something to eat and when Rachel cut herself on a tree they had friendly staff who helped us out.

We then walked a short distance to the zoo, which was just up the road. By this point it was the hottest point of the afternoon and the zoo, which featured lots of steep hills, was a little difficult to get around.

The zoo had a wide variety of animals, from lions to eagle, and once again we found it almost completely empty. Our highlight of the visit was most certainly the bears, who were some of the most active I’ve ever seen! They spent a lot of time chasing each other around the large enclosure, and climbing onto a slide so they could slide back down again. We spent about 2 hours at the zoo before catching an Uber back into the centre. 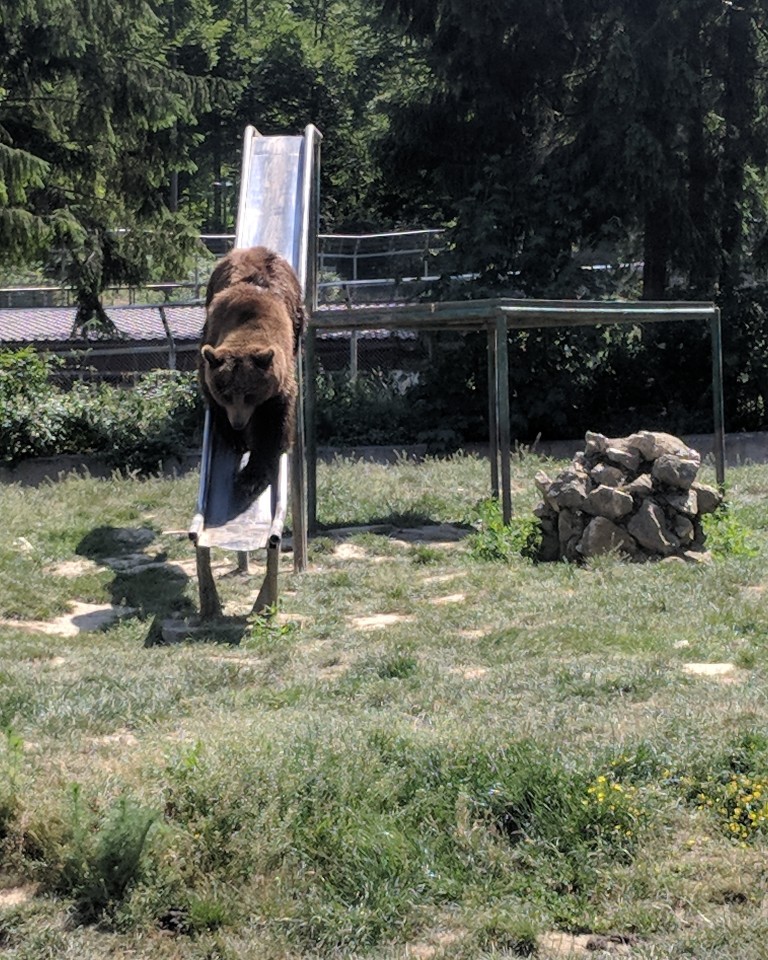 It was late afternoon when we came back and we realised that if we had a big lunch we would not be hungry enough for dinner so we ended up stopping at a place called Ursul Carpatin, which was appropriately named after the bears, and had a cheese board and some wine.

After a couple of hours to refresh ourselves and relax back at the hotel we headed out for dinner, with no destination in mind. A meander around ended with us settling for Vlahia, which sat in the council square.

Despite my insistence I wasn’t really that hungry I managed 3 courses, accompanied by a fruity rose. We both had breaded mozzarella to start, then I had a courgette and chicken in a blue cheese sauce for my main. We ended the meal with a blueberry cheesecake and I’d go as far as saying it was the best cheesecake I’ve ever had in my life! Although I can’t remember the exact price it was really reasonable considering the location.

After dinner we’d booked to do an escape room, feeling that the Dracula’s Den at Escape Rooms Brasov, would be the perfect theme. Unfortunately it was the only bad escape room I’ve ever done. Although it had positive tripadvisor reviews it had recently moved destination and so that may account for the sudden change in enjoyment.

First of all the room was a top floor of a hostel and was approximately 10,000 degrees. It was stifingly hot. Secondly the puzzles were just awful. It relied more on finding items than working things out. For example I’m used to working out a code based on clues but in this room there was just a piece of paper with the code written on it underneath the carpet. Some of the things we solved didn’t do anything and when we asked the lady afterwards about them she said she’d disabled them so it felt like a waste of time. The woman on the walkie talkie would tell us the answers and talk to us constantly, making us feel like we couldn’t properly immerse ourselves in the experience. It was a shame because the woman running it was so lovely. I think she sensed our disappointment and left us in the hostel bar with complimentary drinks.