Mostar is an incredibly beautiful city which serves as a cultural capital in Bosnia & Herzegovina. For this reason it was hard hit in the Bosnian War in the 90’s and a large number of its most important landmarks were destroyed. The Old town has since been restored and in 2005 was declared a UNESCO world heritage site. Most people only stop in Mostar a day or two but we stayed a week and we really enjoyed the opportunity to take the time to see all this wonderful place has to offer. 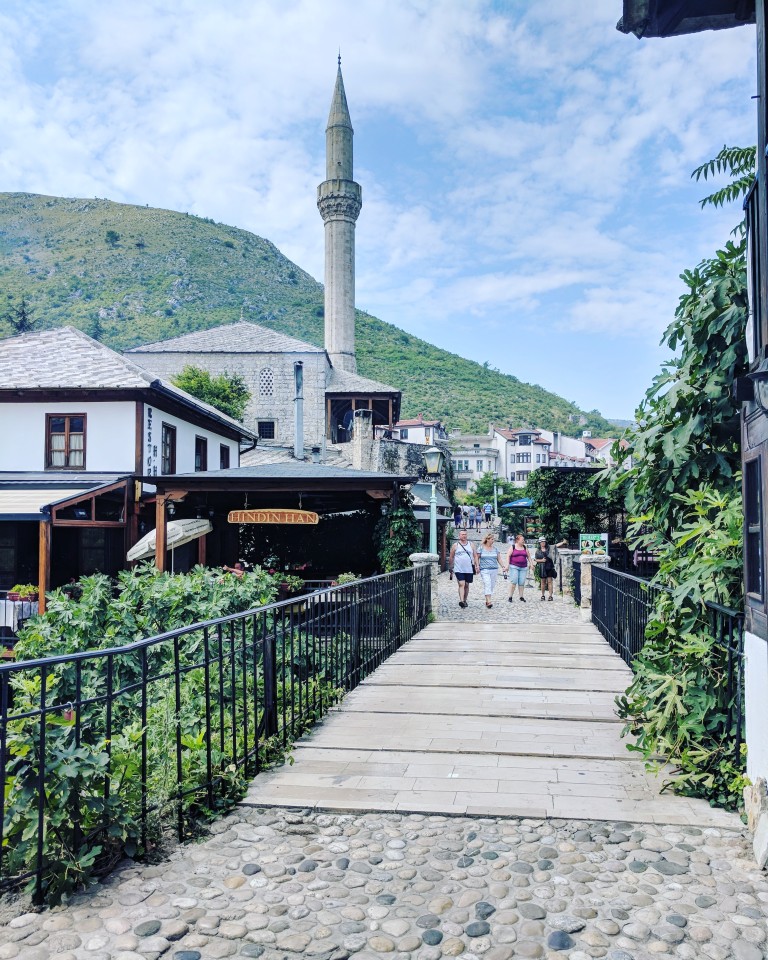 How we got there

We took a bus from Makarska which took us approximately 3 hours and of all the transport we got during our trip this one was certainly the busiest. The bus ended up being 1 hour late, common for this area due to the requirements for the buses to criss-cross on the Croatia/ Bosnian border. The journey was incredibly beautiful, with most of it taking place on the Croatian coast. The border crossing was quick and once we got over the Bosnian border we were given a break and the opportunity to use the toilets or buy food. Our journey cost us 100 kuna each (approximately £13).

We stayed at the AirBnB Happy Apartments Mostar III for 7 nights, for just £23 a night. The place was incredibly modern and clean. We had a big bathroom, a nice living space. access to a garden and a bedroom with the comfiest bed I’m ever stayed in outside my own. The place was perfectly located in between the train station and the old town, with a 10 minute walk to either. The hospitality was great as well, with the owners Dad collecting us from the station on arrival and his Mum doing our washing for us on the first day when there were problems with the washing machine. 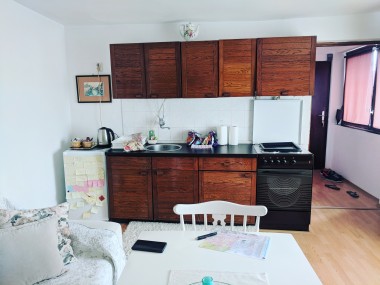 Mostar translates literally to bridge keepers so it’s no surprise that the most famous landmark of Mostar is the Old Bridge. The bridge and its surrounding area is certainly eye-catching and has an interesting, if unfortunate history. It stood in the city for 427 years before being torn down in 1993 by Croatian military forces. 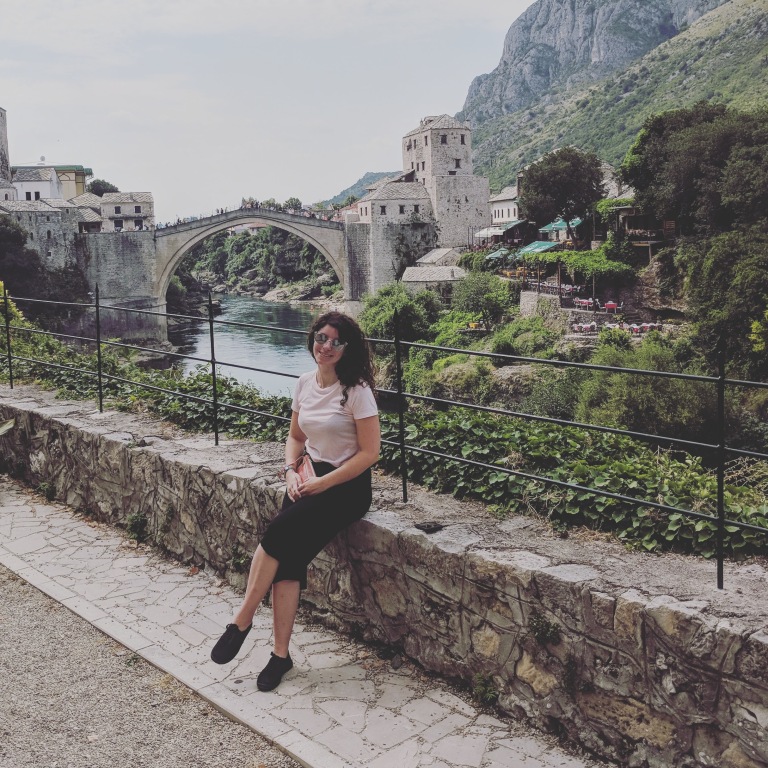 A reconstruction was planned and the current bridge was opened in 2004. The bridge is typical Islamic architecture, and stayed as true to the original Bridge as possible. You’ll find the bridge very busy most of the time, especially when crowds gather to watch divers. Red Bull host an annual diving competition from the bridge but many men from the town dive from the bridge, collecting money from tourists as they do. It is a dangerous feat but one that is impressive to watch.

There are other quaint bridges in the area, which are perfect viewing points, such as the Crooked Bridge, which is a miniature version of the Old Bridge. It was reconstructed itself just before the Old Bridge, believed to be a trial for the bigger reconstruction. The bridges themselves are not always the attraction but rather the Neretva River, such a gorgeous blue river.

Another famous landmark of the Old Town is the Koskin Mehmed Pasha mosque, a 17th century mosque which offers one of the best places to snap the Old Bridge. By climbing the minaret you get beautiful views over the river, although its worth noting it’s incredibly narrow and only wide enough for one person so no crossing on the stairs! After 4/5 attempts of Adam and I trying to walk up and having to backtrack I decided to go for it and run up. Big mistake in 35 degree heat! 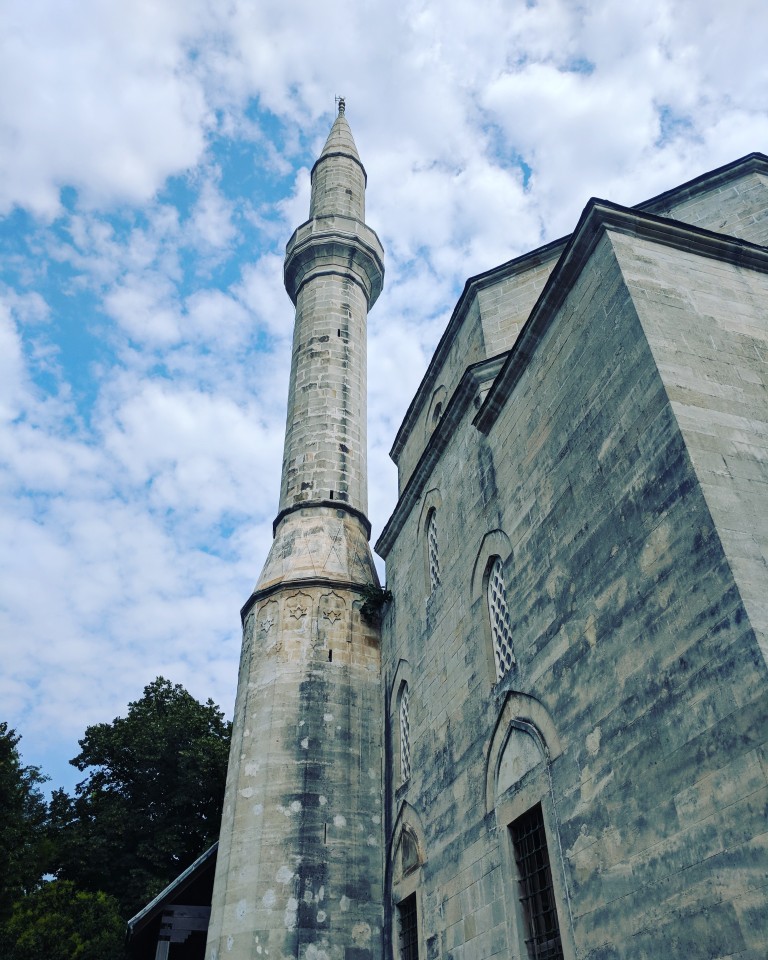 There are a number of mosques in the area, including the Karadjoz-Bey Mosque, which is one of the largest in the area. Once again this was a building that had to be restored, following the war. Another interesting mosque was the Vucjakovic Mosque. What made this mosque different to anything I’ve seen before is that its garden was filled with gravestones, all with dates from the 90s, from people who died far too young. Unlike the Koskin Mehmed Pasha mosque, which I’d say is very open to tourists and didn’t even require for me to cover my hair, other mosques in the area are more traditional. 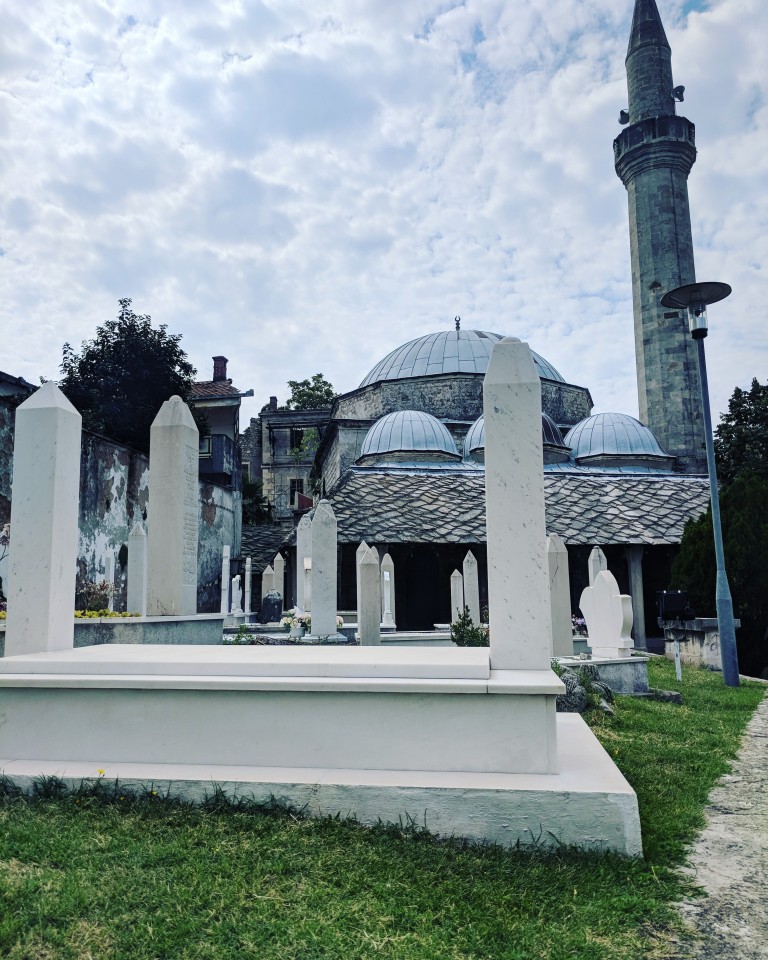 The Old Town is lined with market stalls selling a whole plethora of items. Copper is a very common item to buy, usually in copper tea sets. You can find these for about 15 euro/ 30 bam. Mother of pearl jewellery was also common, with necklaces around 15 bam as well. There were some interesting little stalls selling artefacts from the war there, which is certainly something unique to pick up.

The area is a perfect place to see Ottoman Architecture such as the Turkish House or the Muslibegovic House, which is also a hotel. You can still enter the house as a museum but despite it practically being next door to us every time we visited it was closed.  The Biscevica Kuca, an authentic ottoman style house, had a gorgeous courtyard to sit and relax and can be entered for 2 euros. 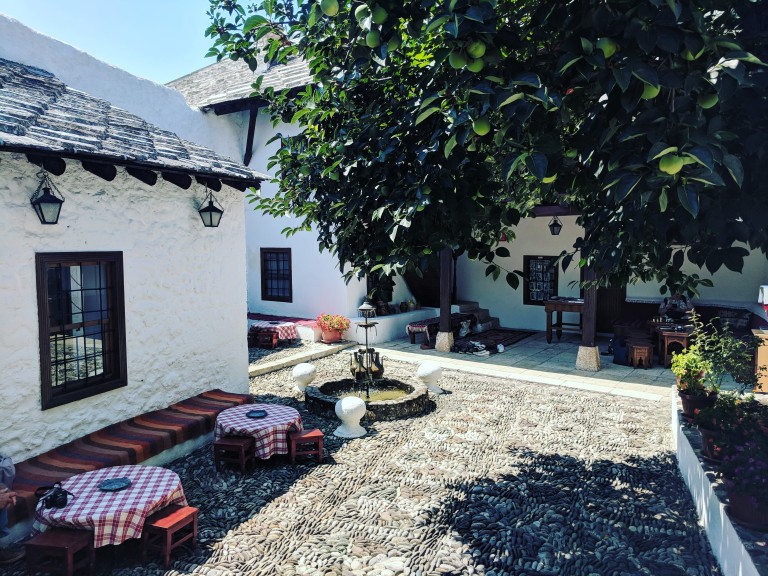 A great way to see the most of the town is the Free Walking Tour. It lasted about 90 minutes and primarily focused on the area outside the Old Town, which has a lot more recent history. We met in the Spanish Square, a quiet little place with fountains and benches and also home to the most magnificent high school I’ve ever seen in my life!

Compared to the Old Town the surrounding area is still heavily marked by the war and our tour guide highlighted this by comparative photos, showing us how things used to look.

An example of this was the Neretva Hotel, once an opulent hotel but was destroyed during the war. As we walked past the building it appeared that they were finally working to restore it.

One place we were introduced to on our tour which we then went back and revisited ourselves was the Sniper Tower. Formerly a bank this building was used during the war for Snipers, thanks to its tall position over the town. It’s height is why it remains such a haunting building, hovering over the town as a reminder of what went before.

The entrance is bricked up but it’s a popular place for people to sneak into and is filled with lots of street art, on both the inside and outside. We didn’t venture in, there was a lot of smashed glass around and our shoes weren’t quite appropriate so something to bear in mind!

Modern architecture isn’t easy to find in Mostar but the Mepas Mall offers a cool place air-conditioned place  to stroll around with some very affordable shops.

And finally the weird and the wonderful, the peace symbol of Mostar… Bruce Lee. In Zrinjevac Park you will find a statue of Bruce, completed as a lighthearted way to show Peace in an area filled with political tension. Story has it that Bruce Lee movies were popular in Yugoslavian times and post war, when Mostar was looking for a statue that people could come together to support, regardless of if you were Bosnian, Croat or Serb, Bruce Lee was the answer! The park itself is really nice to walk around and surrounded by interesting street art and buildings. 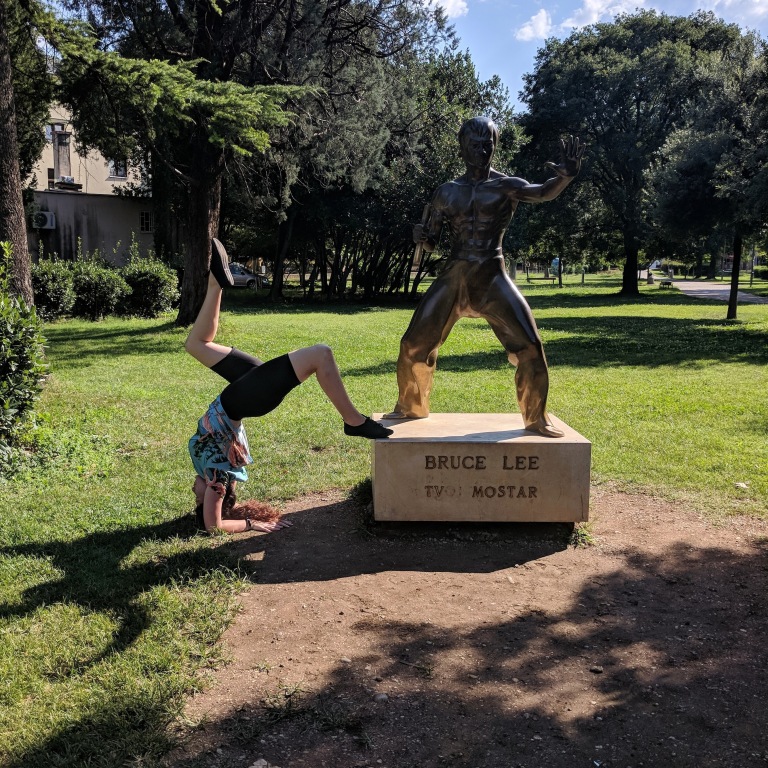 So there we have it, why you should spend more than just a day in the wonderful city of Mostar. Keep your eyes peeled for a post on why I think Mostar is one of my favourite foodie destinations in the world!