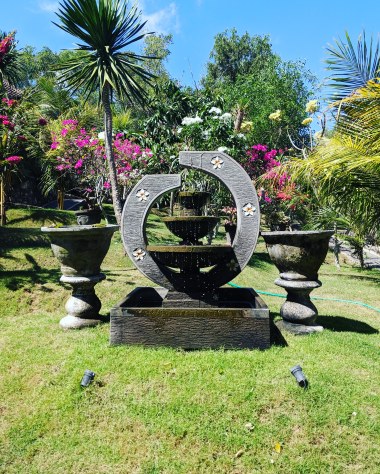 We stayed at Tregge Surf Camp Uluwatu, which was just £16 for the night. The room was basic but large and clean and the communal gardens were beautiful. The location was great and we were able to walk down to the beach whilst we were there. When we were a bit nervous about walking down the road in the dark the owner let us jump on the back of his moped and dropped us off instead.

We visited Uluwatu Beach which had quite a hippy vibe, with colourful street art and a strong surfer crowd. Whilst the beach is beautiful I wouldn’t recommend if for swimming, the tide was very strong and the water came in very fast. Whilst we were there we saw a number of tourists just walking out slightly for a photo and getting knocked over, one woman cut herself quite badly.

We also visited Uluwatu Temple, which is the main attraction of the area. It’s a Hindu sea temple and one of the six holiest temples in Bali.

The big draw is it’s stunning location as it’s built on the edge of a 230ft cliff which protrudes into the sea. For this reason it is a very popular at sunset and is known to get quite busy however we visited late morning and found it relatively empty.

The area is also known for having a significant number of monkeys, believed to be the guardians of the temple, but are also notoriously aggressive so I’d suggest being wary and avoiding them where possible. We had no issues making our way around.

There isn’t a huge amount to see at the temple, rather just walk along the cliff edge and enjoy the view, but regardless you’ll want to leave yourself an hour to see the temple. Watching the water below is really quite breathtaking.

We stopped at Single Fin for lunch and cocktails. We made a reservation in advance and it was a good job as it was quite busy. The position of our seats gave us a great view but there was a bit of a lingering smell of the rubbish down below. We ordered poke bowls and the portions were quite small, Adam wasn’t impressed but they did taste good.

That night we went to La Baracca, again having thankfully made a reservation as it was very busy. We both had pizzas and it was absolutely delicious, both of us left very content!