When I planned our Bali trip I knew that I wanted to visit somewhere else in Asia at the same time, once you’ve gone all that way you may as well get something else in too! There was so much that appealed to me but we eventually settled on Singapore, thinking it might add a bit of variety from Bali, a bit more of an urban experience.

We planned to spend 5 days there, which is more than most, as Singapore often finds itself a popular layover destination. We chose to stay at the Ibis Budget Singapore Selegie, which was very conveniently located just a couple of minutes walk from the Little India MRT. The cost for our stay was £46 a night, which we found great value as Singapore is not known for it’s affordability. 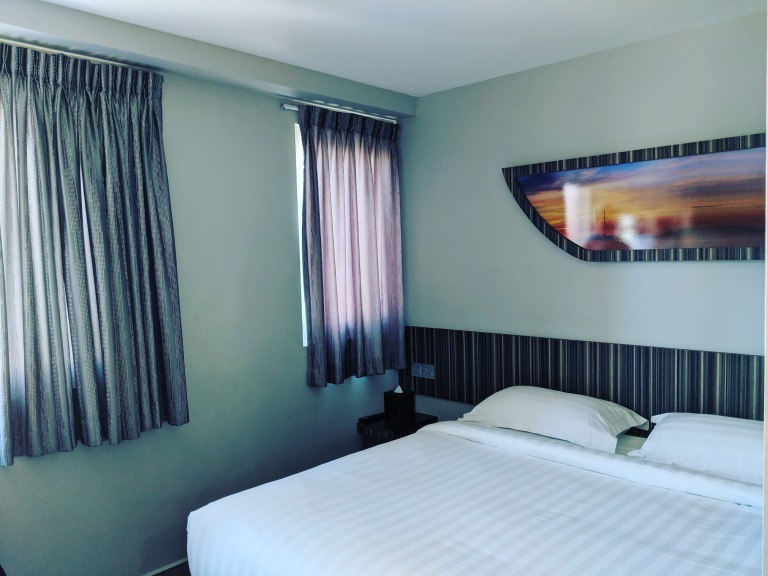 For this we had a room which was reasonably sized, always clean and more importantly the use of a rooftop pool which we loved to use in the evenings after a long day of exploring in the humidity. We found almost every time we visited we had the whole pool to ourselves. The staff were always incredibly friendly and my only criticism would be that the WIFI in our 8th floor room could be a bit patchy at times.

The hotel was in the Little India district of Singapore and was a very colourful place to stay. With a strong Indian population and a huge plethora of Indian shops and restaurants around you really felt like you could be in India itself. I sometimes didn’t find that it was as clean as other areas that we visited throughout our trip and litter seemed to be a big problem but there was never a time when I felt unsafe there.

Being so close to a metro station was certainly very handy. The Singapore Metro is the best way to traverse the city, it’s clean, punctual and efficient.

I didn’t know how tired we’d be after an early flight so I planned us an easy afternoon, a meander around Chinatown. In hindsight maybe this area would be better seen as part of a walking tour, in order to have a better understanding of some of the historical relevance, however we were happy to be able to take it on at our own pace. 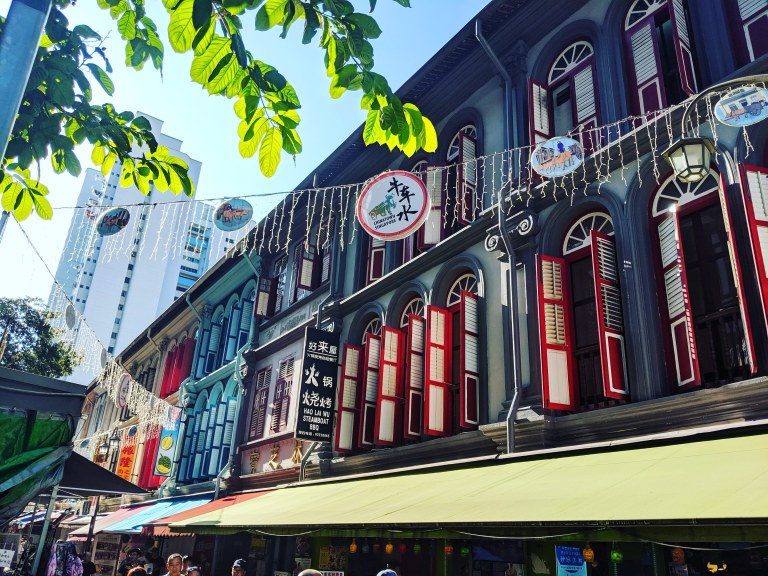 There is some interesting history in Chinatown, and in the 1960’s this was known as one of the more seedier parts of town, with an abundance of brothels and death houses and a very popular red light district. Today the scene is very different but what does remain the same is the beautiful Painted Ladies style houses, providing a gorgeous pastel backdrop to an area with a strong cultural identity.

Our first stop upon arriving in Chinatown was to get something to eat and we headed straight to the Maxwell Food Centre. Anyone who’s done research on Singapore will find their Hawker Centres suggested over and over as the place to eat. A Hawker Centre is a food court with permanent stalls which provide a great way to get a selection of food at a good price.

Maxwell Food Centre is the most famous of these centres and the Tian Tian Chicken rice is the most known of the stalls there, as it was recommended by both Anthony Bourdain and Gordon Ramsey and even holds a Michelin star.  I’d heard the queues were bad but as it was already late afternoon we found the place empty and had our chicken within minutes. 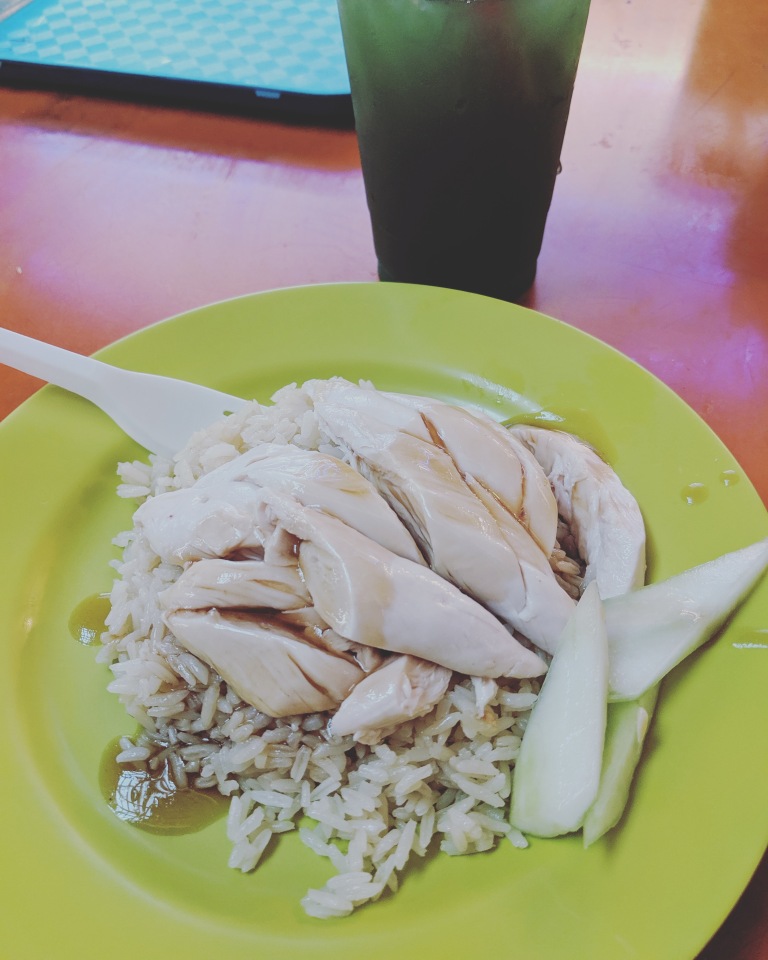 The chicken was so tender and juicy and we really enjoyed the dish, plus it was definitely the most affordable Michelin meal I’ve ever had. We washed it down with a refreshing sugarcane juice and it was probably the nicest meal we had in Singapore.

With the rumbling in our bellies gone we were ready for some sightseeing. We went to the impressively sized Buddha Tooth Relic temple, which houses the apparent tooth of Buddha.

The temple is in traditional Chinese architecture and despite it’s large size is very elegant and incredibly peaceful too. I’ve only ever been to China on a brief layover so it was the first time I’d seen something on this scale.

Not everything in Chinatown is Chinese, as you’ll also find Singapore’s oldest Hindu temple here, the Sri Mariamman Temple. There was a ceremony going on so we didn’t feel comfortable entering the temple but there was lots to admire from outside. On top of the temple sits 6 tiers of brightly coloured Hindu Deities, making it one of the most impressive looking temples I’ve seen. 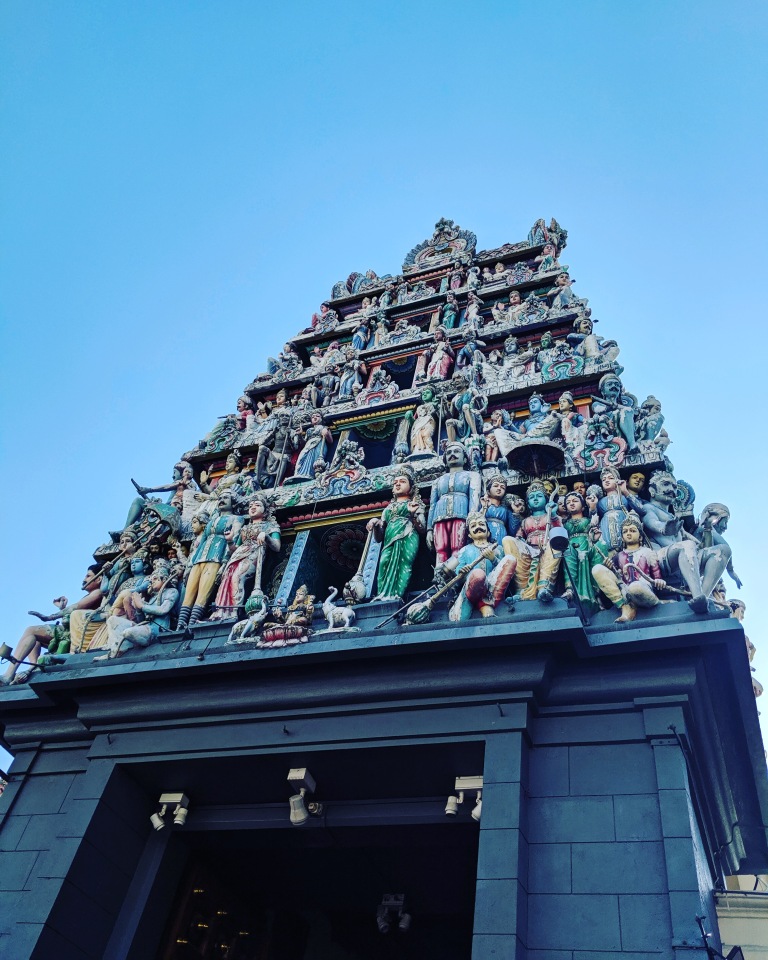 Another temple you’ll find is the Thian Hock Keng Temple, which means ‘Palace of Heavenly Happiness’. The temple is the oldest and most important temple of the Chinese Hokkien people, and worships a Chinese Sea Goddess.

Again the temple follows a traditional Chinese design, with a rich colour scheme of black, gold and red. I particularly loved the addition of the striking decorative dragons.

At the end of the day we were absolutely exhausted so we just strolled to the City Square Mall, around the corner from our hotel. The mall had a great food court and so we grabbed some nice wraps from a place called Stuff’d and we bought some cakes from Mugiya.